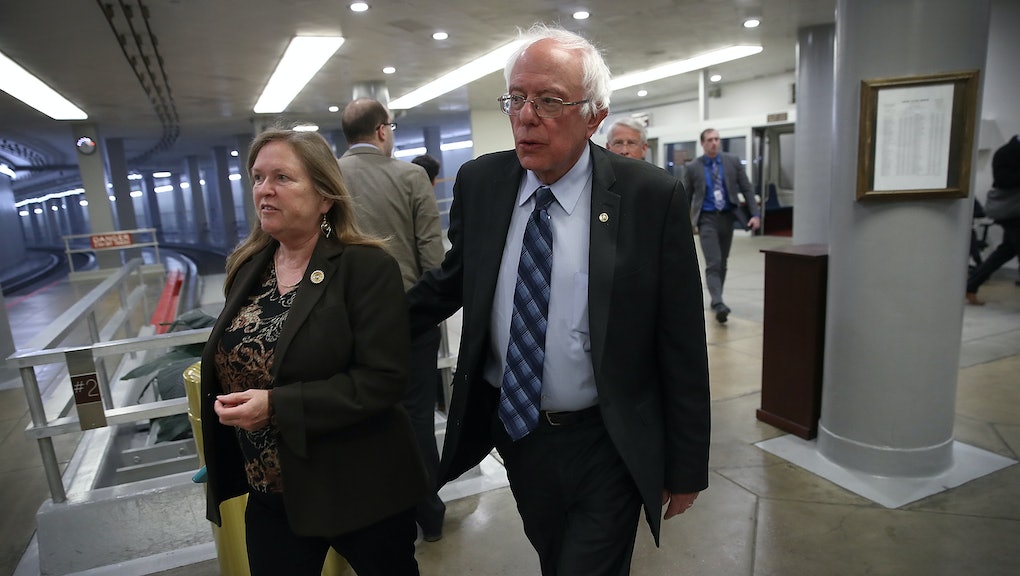 Is Bernie Sanders' wife, Jane Sanders, under FBI investigation? Here's what to know.

Sen. Bernie Sanders has built a reputation as an ardent crusader against financial chicanery of the sort that caused the Great Recession of 2008. He ran his 2016 presidential campaign on the promise that he'd break up the Wall Street banks responsible for the recession. He went so far as to say executives at those banks should have served time in jail.

The fact that Sanders’ wife, Jane Sanders, is reportedly under FBI investigation for "creative" bookkeeping of a similar sort could therefore create a problem for the 75-year-old Independent from Vermont. News of the investigation was broken by VTDigger, a Vermont investigative journalism site.

The Sanders' troubles stem from a 2010 loan application for Burlington College, a small liberal arts school in Burlington, Vermont, where Jane Sanders was president from 2004 to 2011. In an application for a $6.7 million loan from People's United Bank, Sanders claimed the college had $2.6 million in pledged donations lined up from 2010 to 2014. Those donations helped the college purchase property that formerly belonged to the Roman Catholic Diocese of Burlington.

However, records provided to VTDigger by the college showed that the college received only $676,000 in that time — far less than the number Jane Sanders had used to justify the loan.

Sanders resigned from the college, reportedly under pressure, in 2011. Burlington College closed in May 2016, citing the botched real estate deal as a driving factor. Soon after, Bryan Toensing, vice chair of the Vermont Republican Party and the head of Donald Trump’s presidential campaign in the state, called for a federal investigation into the potential loan fraud.

"The evidence indicates that Ms. Sanders, as president of the college, successfully and intentionally engaged in a fraudulent scheme to actively conceal and misrepresent material facts from a federal financial institution," Toensing wrote in a letter to U.S. Attorney Eric Miller, obtained by Seven Days, a Vermont alternative weekly newspaper.

Fast on the heels of that accusation, Toensing also accused Sen. Bernie Sanders of having used his office to pressure People's United Bank to approve the loan to Burlington.

The FBI has been characteristically tight-lipped about the investigation, which is ongoing, but Sen. Sanders has called the investigation "pathetic" and "nonsense" and has labeled it a politically motivated attack by a Republican opponent.

Though Sen. Sanders’s former campaign manager Jeff Weaver has said that the neither the senator nor his wife have been contacted by the FBI regarding an investigation, they have retained high-powered attorneys to represent Jane Sanders in the matter. The hired Rich Cassidy, a Burlington attorney and Sanders supporter, and Larry Robbins, a Washington D.C., defense attorney who represented Scooter Libby, Politico reported.

Republicans have used the investigation to attack Sanders.

"Jane Sanders’ alleged bank fraud is a lot like Bernie Sanders’ approach to policy. Make grandiose proposals, fudge the details to win over support and ignore anyone who points out that you’re being fiscally irresponsible," Michael Ahrens, the Republican National Committee's rapid response director, wrote on June 28.

Those attacks could come back to haunt Sanders if he runs for president again in 2020, experts said. "For Sen. Sanders, this is not what voters have in mind when they think of him. Those are the narratives, the ones that are totally counter to what people think of you, that are most damaging," Colin Reed, executive director of the GOP super PAC America Rising, told the Hill. "This goes at his perceived strength, and in politics on either side of the aisle, perception is reality."