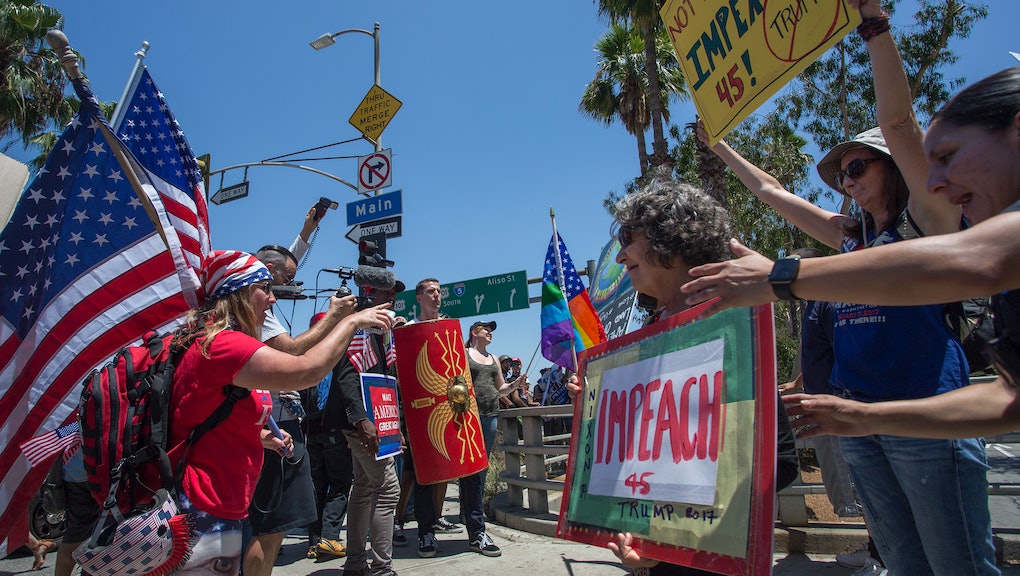 Fourth of July protests are an American tradition, historian says

For many Americans, celebrating the Fourth of July and showing “patriotism” means focusing on the greatness of the United States. But historically, the holiday has a long tradition of protest — and those using the day to dissent are behaving patriotically as well, one historian argues.

“The entire nation was born in protest,” University of Pennsylvania historian Jonathan Zimmerman told Mic in a Tuesday interview. “The Declaration of Independence is a document of protest. It enumerates items of protest against King George, those two dozen bad things that England did.”

Some of those demonstrating across the United States on Tuesday point out they are keeping that tradition going, as they protest the policies of President Donald Trump. Organizers of the We Will Not Be Banned anti-Trump rally and teach-in at Trump Tower on Fifth Avenue in Manhattan, for example, say the U.S. government under this administration isn’t living up to its promises of life, liberty and the pursuit of happiness — or equal justice under the law.

They cite the president’s partially reinstated travel ban on select Muslim-majority countries and support for Kate’s Law and the No Sanctuary for Criminals Act as issues denying equal rights to Muslims and Latinos.

“Dissent is patriotic,” protest organizer Marium Khawaja of CAIR-New York said during a Tuesday interview. “We are exemplifying the qualities the Declaration of Independence stood for. We will never stop fighting for the values of this country that we hold dear.”

Indeed, progressive advocates like abolitionist Frederick Douglass and women’s suffrage advocate Susan B. Anthony famously chose Independence Day to challenge the country and its citizens to fulfill the ideals set forth in the nation’s founding documents.

Douglass delivered his iconic speech “What to the Slave is the Fourth of July?” on July 5, 1852 in Rochester, New York, arguing that America can’t live up to its founding principles as long as black men and women live in bondage.

Anthony and other suffrage advocates startled then-Sen. Thomas Ferry when they interrupted a centennial Independence Day celebration in Philadelphia on July 4, 1876 to make it clear that they believed denying women equal rights was an affront to the nation’s core ideals.

Given these and other historical precedents, University of Pennsylvania’s Zimmerman argues that protesting on the Fourth of July is one of the most patriotic activities Americans can undertake.

“Those who would characterize Fourth of July protesters as unpatriotic ignore a many-century history of protest that was highly patriotic,” he said.

Protesters on Tuesday continued that tradition of using Independence Day as an opportunity to express dissent, not only in New York but also other cities, like McAllen, Texas, where U.S. Senator Ted Cruz was met at an event by both supporters and protesters, as Texas Tribune reporter Patrick Svitek tweeted in a pair of photos.

Ahead of Independence Day, protesters gathered over the weekend across the nation, with rallies on July 2 in cities including Los Angeles, San Francisco, and Philadelphia, as well as communities in Iowa and Illinois.