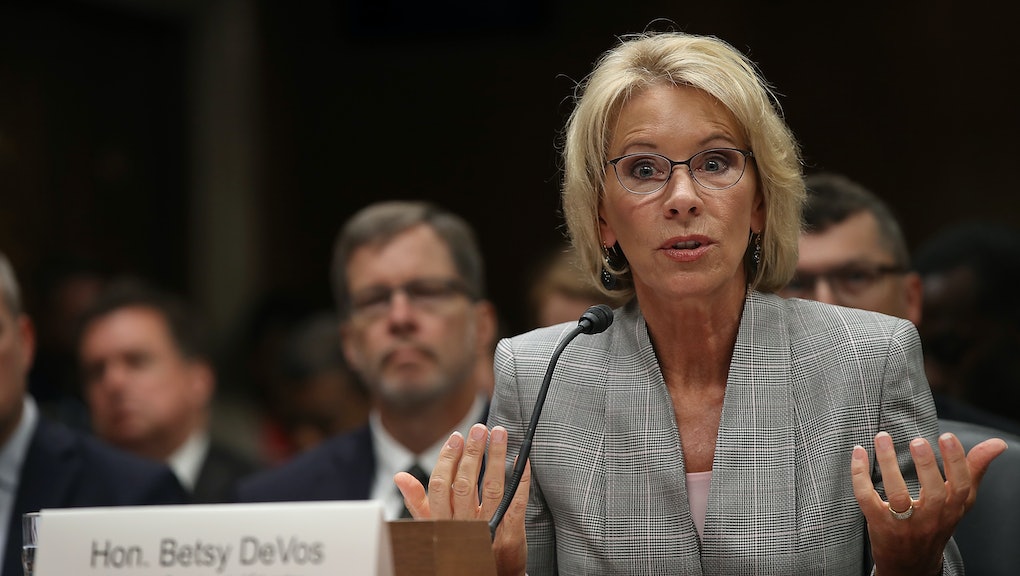 Education Secretary Betsy DeVos should not delay fraud protections for student loan borrowers, a lawsuit filed Thursday against the Department of Education by 18 states and the District of Columbia argues. At issue is the department’s intent to remove provisions put in place by the administration of former President Barack Obama to protect college borrowers swindled by for-profit schools.

The Obama-era “borrower defense” rule, which was supposed to take effect Saturday, included a number of protections aimed at providing student loan relief to those misled or cheated by for-profit colleges or educational programs. But in a June statement, DeVos said her department would pause the regulations in order to “take a step back and make sure these rules achieve their purpose: helping harmed students.” She claimed the original rules produced “a muddled process that’s unfair to students and schools” and said it was time for a “regulatory reset” in part to protect taxpayers, the New York Times reported.

But according to the complaint filed by Massachusetts Attorney General Maura Healey, the department’s reasoning for the delay is “mere pretext for repealing the rule and replacing it with a new rule that will remove or dilute student rights and protections.” The filing says that as it stands, the borrower defense rule “deters misconduct by educational institutions, and protects the well-being of the states’ respective residents.”

A separate lawsuit by two student borrowers, also filed Thursday, further argues why the department should keep the Obama-era protections in place:

Some predatory schools, generally concentrated in the for-profit college industry, rely on the federal student aid program. These schools often have more students that drop out than graduate and leave students with significantly more debt than other schools. The exponential growth of the for-profit sector has left millions of former students with unmanageable student loan debt borrowed in service of a credential they were not able to obtain or that provides little or no value.

The lawsuit asks that the borrower defense rule be enforced, at least until it is renegotiated via DeVos’ rule-making committee.

Regarding the suit by the attorneys general, David Bergeron, a former Education Department official who is now a fellow at the Center for American Progress, said in a phone interview that “filing in the D.C. court means [the] case will have a national impact, and was the right course to take in order to provide injunctive relief.”

While Bergeron said there’s no way to tell how swiftly the suit could be decided, he said these actions are a step in the right direction for defrauded borrowers. “This is good news for students,” he said, “because even though individual states are bringing suit, there will be a national impact.”

In October, Obama finalized the borrower defense rule, meant to protect students who completed a for-profit educational program — like those at Alta Colleges, for example — that did not deliver on original promises. The attorney general of Illinois sued the for-profit college in 2014 for misstating its accreditation status. Despite charging some criminal justice students as much as $75,000 for a three-year program, only 3.8% of Alta graduates ended up as sworn police officers and correction officers.

DeVos has come under fire for actions critics claim have made it easier for for-profit colleges to prey on students — like giving institutions an extra year to comply with Gainful Employment regulations requiring they be upfront with prospective students about true graduate employment rates and debt levels. The gainful employment rule was partly meant to prevent alleged bad behavior by schools, such as enrolling certain students in programs without warning that a given area of study might make it hard to find a job. For example, there have been reports of people with disabilities being placed in programs in which their disability might prevent them from doing that particular job, Bergeron previously told Mic.

“Since day one, Secretary DeVos has sided with for-profit school executives against students and families drowning in unaffordable student loans,” Healey said in a statement. “Her decision to cancel vital protections for students and taxpayers is a betrayal of her office’s responsibility and a violation of federal law.”

For-profit colleges, which saw a foe in the Obama administration, have reportedly seen stock values surge under President Donald Trump. “The perception of investors has been that the prior administration was really out to get the sector,” Trace Urdan, a research analyst at Credit Suisse, told the Chicago Tribune. “Trump helps make these companies more investable because there is less concern that the government is trying to drive them out of business.”