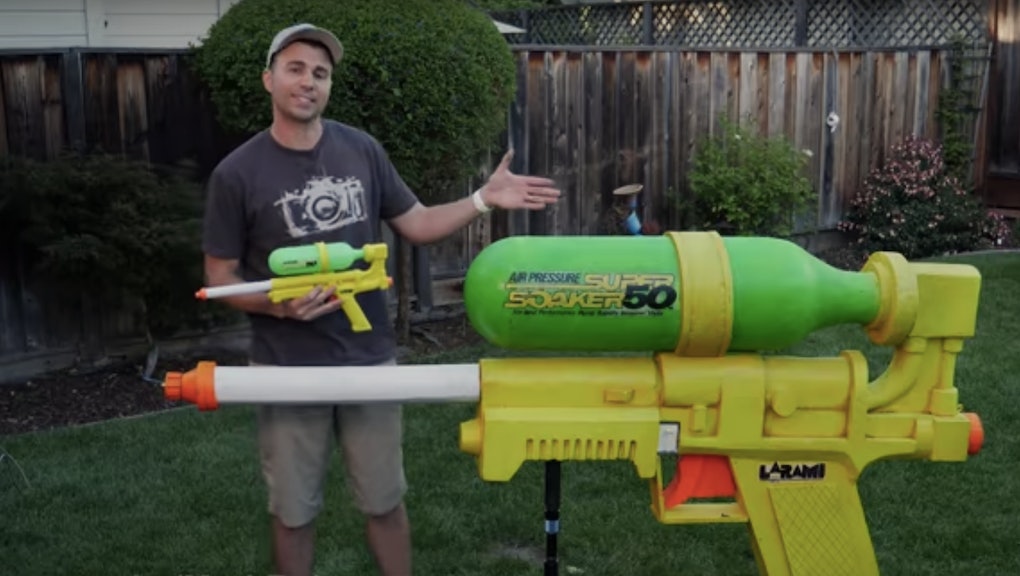 A former NASA scientist used his engineering genius to invent the world’s largest Super Soaker water gun, just in time to explode soda cans and lines of wine glasses in his backyard this summer.

It looks strikingly similar to a Super Soaker, but this is no toy for kids. The gun is 7 feet long and shoots water out at 272 miles per hour, which is strong enough to obliterate soda cans or carefully slice through the middle of a watermelon like some sort of laser gun.

“This could definitely shoot Ralphie’s eye out,” Mark Rober, the water gun’s creator, wrote in his YouTube video description.

Last year, the inventor made headlines for creating the largest Nerf gun in the world, confirmed by a the Guinness Book of World Records. Six feet in length, that gun shoots oversized foam bullets at 40 mph. This project takes aim at super-sizing yet another classic toy.

“Now that I’m a dad and I know how to engineer, I decided to once again level up my water fighting capabilities,” Rober said in the video.

The gun is modeled after the real Super Soaker toy, which makes total sense, considering that Rober is quite the fanboy. He called the original Super Soaker inventor, former NASA engineer Lonnie Johnson, “one of my personal engineering heroes.” Rober even discussed his oversized Super Soaker with Johnson himself over video chat.

It uses pressurized nitrogen gas tanks to shoot water, which is a bit of a diversion from the kid’s toy. However, even though Rober included a list of materials and instructions on how to build your own, remember to play it safe.

“Pressurized gas as used here is dangerous,” as the Verge put it. The gun is so powerful, in fact, that it shoots water at a force of about about 2400 PSI — to put that in context, a garden hose shoots at about 50 PSI and a fire truck hose shoots at 300 PSI.