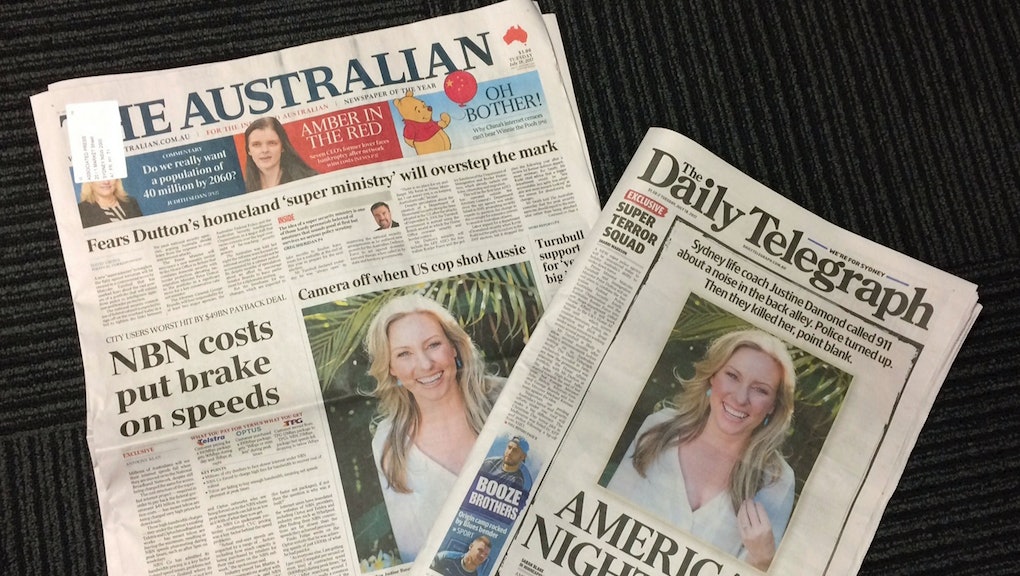 Chauntyll Allen wasn’t sure how to feel on Monday when she traveled to Justine Damond’s memorial site in the affluent South Minneapolis neighborhood known as Fulton.

The 43-year-old leader of a Black Lives Matter group in St. Paul, Minnesota, stood near Xerxes Avenue and 51st St. by the late Damond’s home, watching the mostly white residents share remarks about police brutality and the need for police reform.

Many of those same people, Allen recalled, were nowhere to be found when she and her fellow activists were out marching for justice for black police-shooting victims like Philando Castile and Jamar Clark.

“Some white people don’t feel the tragedy until one of them is murdered,” Allen told Mic on Wednesday.

Despite her reservations, Allen and her pro-BLM allies are joining the call for justice for Damond, an Australian white woman, who was fatally shot Saturday by Mohamed Noor, a black and Muslim Minneapolis police officer of Somali descent.

“We’re going to be doing a rally on Friday in solidarity with Justine,” Allen said. “It’s that time where that 99% of people need to get together and decide that lives need to matter. I’m not saying ‘All Lives Matter.’ I’m saying, ‘lives matter.’”

Damond’s shooting death in many ways has flipped the script in the national conversation about race and policing.

It illustrates the reality that white Americans, who represent 61% of the population, also make up the majority of the roughly 1,000 Americans killed by police officers every year.

Police brutality has been framed largely as a black issue because black people, who only make up about 13% of the population, are nearly three times as likely as their white counterparts to be killed during encounters with law enforcement.

Blacks are also more likely than whites to be incarcerated for longer sentences for committing the same crimes even though whites and blacks commit many crimes at about the same rate.

Allen and other activists say they don’t want the dialogue on Damond to “whitewash” the larger conversation about the need for police reform, fearing that could water down the BLM movement’s push to address institutional racism as a whole.

Yet local BLM supporters realize that Damond’s death has raised awareness among their white neighbors that issues that affect black lives more still affect white people as well, and that the skin color or religion of the role players involved in fatal police encounters shouldn’t change the public’s perception.

“We’ve been warning the general public about patterns of police abuse and the need for reforms for years,” activist and Minneapolis mayoral candidate Nekima Levy-Pounds told Mic on Wednesday. “Our warnings have fallen on deaf ears.”

Levy-Pounds is the civil rights attorney who helped found Minneapolis’ now-defunct BLM organization back in November of 2014 and later served as president of the city’s NAACP chapter. On Sunday, she spoke at a vigil for Damond in Fulton along with leaders from the local NAACP.

“We talked about how what happened to Justine is part of a larger pattern of police violence and abuse that has been allowed to go on unchecked in the state of Minnesota and Minneapolis,” Levy-Pounds said. “We connected her murder to the murders of Jamar Clark, Philando Castile, Phil Quinn, the list goes on and on.”

The apparent unequal empathy expressed for people of color encompasses more than just police shooting victims in the Damond case.

According to activists Mic spoke with, part of the conflict the Minneapolis black community is having over Damond’s shooting is ironically about the perceived unequal and unfair treatment of the police officer who allegedly shot her.

Minneapolis Mayor Betsy Hodges declined to weigh in on the police investigation after Jamar Clark, an unarmed black man, was shot in the head by a white police officer in November of 2015. But Hodges appeared to question Noor and his partner’s use of their body cameras within days of Damond’s shooting.

Yet Fox chose to refer to Noor as a “Somali immigrant cop.”

Alex Jones’ Info Wars and sites like the Daily Mail and World Net Daily called Noor the “killer cop” who was a “diversity hire.”

“We found it very perplexing,” independent journalist KingDemetrius Pendleton said in an interview Wednesday. “Mr. Trump has already created a lot of Islamophobia. In Minneapolis, you have a high population of Somali immigrants. Now this is raising tensions between Muslims and Christians. It’s kind of like the media is pitting one against each other, divide and conquer.”

Pendleton is the South Minneapolis man locals affectionately refer to as “Black CNN.” The 47-year-old, who’s routinely seen wielding a camera phone while filming protests, has spent the last four days in Fulton capturing the drama and posting interviews with white Fulton residents on his Facebook page.

Pendleton has watched the mainstream media write about criminal records and drug use of black police-brutality victims like Eric Garner and Freddie Gray, among others, yet has seen no such stories emerge about Damond, the Australian yoga instructor and “beautiful bride-to-be” who “moved to America for love.”

Castile, Pendleton recalled, was engaged to be married as well.

“It’s like a double standard,” Pendleton said as he sat with a friend at a coffee shop up the street from the scene where Damond was shot days earlier.

“People are going to come up with their own narrative when it comes to this situation. It’s not about being pro-Black Lives Matter. I’m pro-do what’s right. That’s what matters. The truth deserves no apology.”