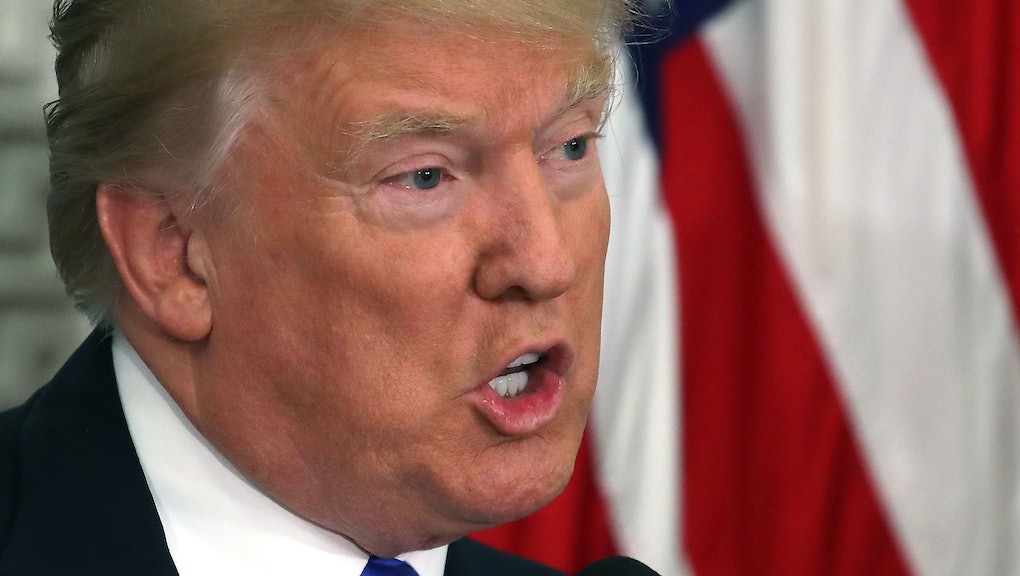 Trump keeps saying he wants to “let Obamacare fail.” How would that happen?

After it became clear that Senate Republicans didn’t have the votes to deliver on their promise to repeal and replace the Affordable Care Act, President Donald Trump suggested his administration would instead let the health care law “fail,” clearing the field to “come together and do a great health care plan.”

Republicans in Congress have long insisted the health care law, if left alone, would collapse under its own weight. They argued that despite the law’s requirement that everyone must buy health insurance, many young, healthy people chose not to. That in turn meant that those who did sign up for coverage were, on average, less healthy. And the sicker a group of people is, the more they cost to insure.

Many insurers balked at the cost of offering plans on the exchanges established by the law.

According to data from the Kaiser Family Foundation, a nonpartisan health care policy group, the number of insurance companies offering plans on the markets was fairly stable from 2014, when the markets were established, through 2016. But a spate of companies opted not to offer marketplace plans in 2017, and others suggested they might pull out in the near future.

Republicans seized on the news as proof that the ACA was floundering.

But some experts say the markets had actually begun to stabilize.

“Insurers were on a path to break even or do even better this year, and that’s exactly what we’re starting to see in the data,” Matthew Fiedler, a fellow at the Center for Health Policy at the Brookings Institute and former chief economist for President Obama’s Council of Economic Advisers, told Mic.

“If the market does collapse, that’s going to be a reflection of a choice the administration has made,” he said.

There are several ways Trump could go about sabotaging the ACA, he said.

The most obvious way would be to stop making so-called Cost Sharing Reduction payments. Under the ACA, those with low incomes are entitled to subsidized insurance. Insurers cover the cost and are reimbursed by the federal government in the form of CSR payments. Legally, the government is required to make those payments.

When Trump entered the White House, he didn’t stop the payments. In fact, both he and Congressional Republicans asked the court to delay its order going into effect while they attempted to hammer out a replacement for the ACA; on Tuesday, the Trump administration said it would continue the payments for the time being.

If Trump were to stop making CSR payments to insurers, “insurers would face significant revenue shortfalls this year and next,” KFF’s Larry Levitt, Cynthia Cox and Gary Claxton wrote. That would leave insurers with two options: Raise premiums to bridge the gap, or leave the markets altogether. Either would increase the likelihood that the ACA could fail, Fiedler said.

And the uncertainty created by the Trump administration — insurers don’t know whether the administration will continue making CSR payments and, if so, for how long — has led insurers to raise premiums to bridge the gap in the event Trump does decide to stop making payments.

The administration could also hamstring the ACA by declining to enforce the so-called individual mandate, which requires everyone to purchase insurance — either through their employers or over the marketplaces — or face fines come tax season.

Strict enforcement of the individual mandate ensures that risk pools have enough healthy people in them to support the older and sicker. If Trump declines not to enforce the mandate, it would cause many healthy people to opt not to purchase insurance at all, premiums to rise for the sick and the cost of remaining in the markets to prove too high for many insurers.

Trump could also opt not to encourage enrollment, Fiedler said. In January, the administration stopped airing ads for the ACA and halted outreach aimed at increasing signups. At the time, Ron Pollack, executive director of Families USA, a health care policy group that supports the ACA, told Politico the move was “a mean-spirited effort that can only result in fewer people getting coverage who need it.”

If less people know how to sign up for the ACA, then less people will sign up, resulting in smaller pools, increased premiums and a greater likelihood the law will fail, Fiedler said.