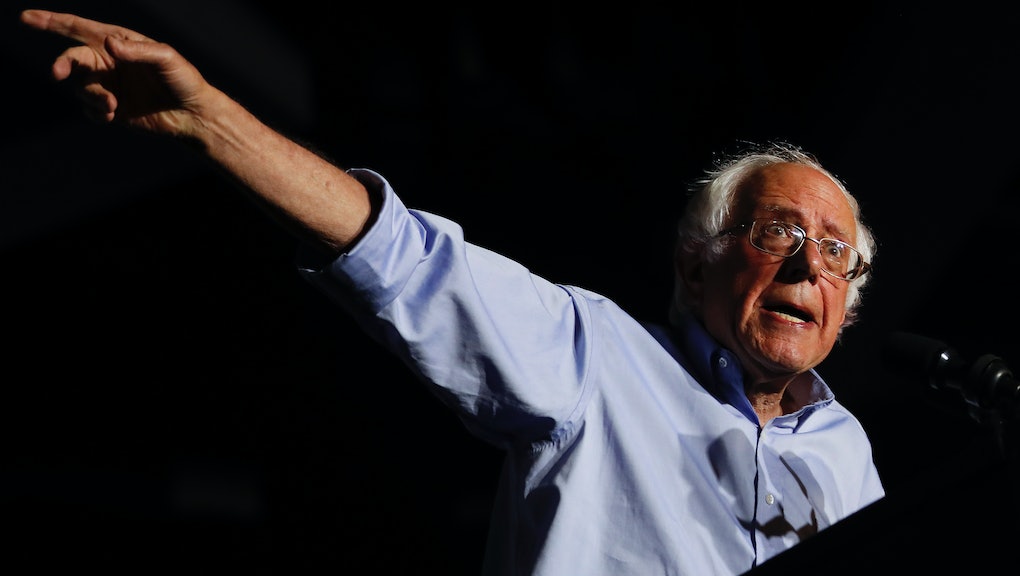 With the Senate focused on health care reform, a little-noticed bill that could increase America’s production of fossil fuels may see a vote on the Senate floor as soon as next week. Sen. Bernie Sanders (I-Vt.) does not plan to let that legislation pass quietly.

In an emailed statement provided to Mic on Thursday night, Sanders said he opposes the current form of the Energy and Natural Resources Act, a bipartisan bill introduced in late June by Sens. Lisa Murkowski (R-Alaska) and Maria Cantwell (D-Wash.).

“Our job is to move away from fossil fuels toward sustainable energy and energy efficiency,” the senator said in the statement. “This bill does the opposite.”

Murkowski and Cantwell say the bill would modernize America’s energy infrastructure by finding “common ground” on energy issues. The bill would also continue funding for the Land and Water Conservation Fund, a fund that taxes oil and natural gas earnings to preserve U.S. land and water resources.

But Sanders sees it differently: “[This bill] would make us more reliant on fracking for natural gas for decades to come by expediting the review process for natural gas pipelines and liquefied natural gas,” Sanders said in his statement. “It would also provide millions of taxpayer dollars to research new offshore natural gas extraction techniques.”

Sanders opposition is not surprising. But it is strategic.

Senate Majority Leader Mitch McConnell (R-Ky.) fast-tracked the bill for consideration by the full Senate. If Republicans fail to pass a health care bill on Tuesday, Democratic aides and outside groups said McConnell may bring up the energy bill before the Senate next week to show the Senate can move quickly and approve bipartisan legislation.

In announcing his opposition to the bill, Sanders said he will offer amendments to the legislation. Those changes would have to be voted on by the Senate, slowing any quick passage of the legislation.

A Sanders spokesman said, at this point, the former presidential candidate will not oppose efforts to proceed to a vote on the bill. So far, Sanders is the only senator to come out publicly against the bill.

Last year, Sanders was the lone voice of dissent among Senate liberals to a similar bill. He voted no on the legislation in committee, but was not present to vote on the bill when it came before the full Senate.

This time around, there will be no committee vote. Groups opposed to the energy bill said Democrats who opposed the closed-door way Republicans developed their health care bill should also be critical of the way this bill was advanced to the Senate floor.

Last year’s similar bill passed the Senate 85 to 12. The 12 opponents were Republicans who believed the legislation was not conservative enough. All present Democrats supported the bill.

Three hundred and fifty progressive organizations announced their opposition to the bill earlier this month. “This bill would lock in our dependence on fossil fuels for decades to come, directly undermining our country’s efforts to stave off the worst effects of climate change,” their letter read. Progressive activists, like actor Mark Ruffalo, have also put pressure on Democrats to oppose the legislation.

Specifically, those environmentalists say the bill will incentivize the creation of new natural gas pipelines and fossil fuel exploration, both in the U.S. and through offshore drilling. They contend this bill would lead to the creation of a larger natural gas and oil infrastructure that will mean dependence on fossil fuels for decades to come.

That is in line with the actions of President Donald Trump, who has rolled back moves made by former President Barack Obama that imposed stiffer regulations and taxes on fossil fuel producers, particularly coal companies.

“If you’re criticizing [President Donald] Trump over [exiting the Paris Climate Agreement], then I don’t believe you can read the fossil fuel section of this bill and seriously consider voting for it,” said Mitch Jones, senior policy advocate for Food and Water Watch, of Democrats who slammed the president for leaving the global agreement to fight climate change.

It’s not clear the energy bill will be considered next week. David Popp, a spokesman for McConnell, said on Thursday the Senate will remain focused on health care. But progressives are readying themselves for a fight.

An organizer with an environmental group opposed to the bill said Food and Water Watch, Our Revolution, CREDO and other organizations have driven 200,000 emails and 3,000 calls to the Senate opposing the bill. “We are working hard to get the grassroots activated on this issue,” the organizer said.

Bill Snape, senior counsel at the Center for Biological Diversity, said what to do next with the bill now lies with Sen. Chuck Schumer (D-Ny.), the Democratic leader.

“Does he want to give a gift to President Trump or keep his caucus unified on green energy?” Snape said, noting progressives are waiting to hear what day the bill will come up on the Senate floor. He called Bernie’s opposition “good news” and “a start.”

Snape added that now, the question is: “Can Sanders coalesce with enough Democrats and get a better consideration of the bill?”