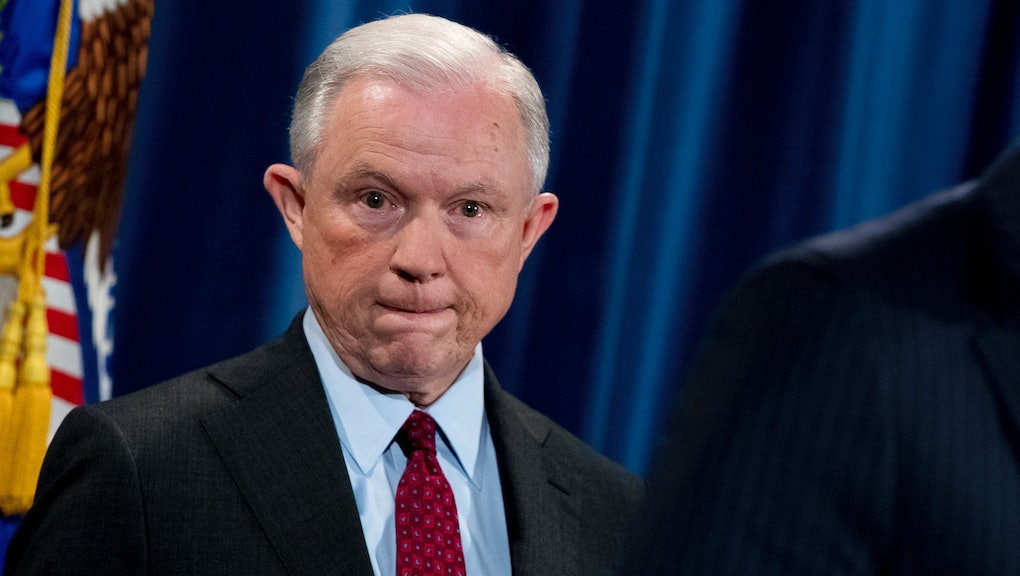 One of the cornerstones of the American judicial system — at least in the popular imagination — is the concept of due process: the idea that everyone is (supposedly) innocent until proven guilty, and the government (supposedly) cannot mete out any punishment until it has proven its case in a court of law.

But when it comes to asset forfeiture, due process doesn’t quite apply like people think: Federal, state and local governments are, in many cases, allowed to confiscate suspects’ bank accounts, personal property and real estate and keep the proceeds, even if the owners are never charged with or convicted of crimes. The practice has long been criticized by organizations on the right and left alike; the Obama administration limited the federal government’s involvement in 2015, and a number of states passed major reforms to their laws in recent years.

But try telling that to Attorney General Jeff Sessions, who issued a new directive this week that will make it easier for police officers across the nation to seize people’s property and cash.

“As any of these law enforcement partners will tell you, and as President Trump knows well, civil asset forfeiture is a key tool that helps law enforcement defund organized crime, take back ill-gotten gains and prevent new crimes from being committed, and it weakens the criminals and the cartels,” Sessions said while announcing the new policy.

Specifically, Sessions’ directive rescinded the 2015 policy enacted by the Obama administration that limited a practice called “Adoption,” which allows state and local law enforcement agencies to seize people’s assets using federal law — instead of state or local law — while sharing the proceeds with their federal counterparts. State and local law enforcement often use adoption because it allows them to bypass more stringent state laws on forfeiture and to directly keep the assets they seize instead of turning them over to a state general fund.

A 2014 investigation by the Washington Post showed that police seized nearly $2.5 billion from motorists they pulled over in the decade after 9/11 using the federal adoption law; some agencies, freed from oversight on their use of seized funds, spent the money on “luxury cars, high-powered weapons and military-grade gear such as armored cars.”

Many lawmakers on Capitol Hill greeted the news of Sessions’ new policy with groans, anger and confusion — and voiced suspicions that it could be a way for Sessions to make good on his interest in targeting the marijuana industry in states that have legalized the drug for recreational use.

“To forfeit-sale with minimal or no due process, and not having been convicted of a crime, I just think is outrageous,” Rep. Earl Blumenauer (D-Ore.) said of the new directive.

Blumenauer worries the practice could be used to go after medical or medicinal marijuana businesses in the states like Oregon that have passed a variety of marijuana-legalizing laws.

“There’ve been some grotesque abuses,” he explained, adding that he’d already heard from people in the cannabis industry. “I have no problem with people who have been convicted forfeiting the fruits of illicit behavior. But the stuff going on where people have not been convicted of anything, denied access to their property — pretty cavalier.”

It’s not just Democrats who are complaining.

“I don’t think you should have civil assets taken from you without a conviction,” Sen. Rand Paul (R-Ky.) told Mic. “I’ve introduced bills in the opposite direction, that say you’ve had to be actually convicted by a jury of your peers to have your stuff taken or kept anyway.”

Rand also tweeted about his opposition to the policy:

Lawmakers who have seen the practice operate at the local level decry it.

“I found it to be deplorable,” Rep. Steve Cohen (D-Tenn.) told Mic. “I’ve been working against that type of thing since the ’90s, when I was a state senator.”

Cohen started his career as a legal advisor for the Memphis Police Department and saw how asset forfeiture was misused: “There was a series of arrests in Memphis by drug units that were directly to get money for the drug units,” he explained. “And I’ve seen it so many times. And the asset forfeiture is a conflict of interest, and it’s cash register justice.”

Cohen said the new directive is part of a dangerous trend from Sessions.

Other lawmakers echoed that criticism of Sessions, who was in the minority of his own party on many criminal law issues.

“The attorney general was a member of Congress until a short time ago; he came with his own opinions,” Rep. Darrell Issa (R-Cal.) told Mic. “Apparently his opinion was that law and order, or law enforcement, can do no wrong — that U.S. attorneys and district attorneys all over California can do no wrong.”

“I think that that’s naive,” Issa added “The abuses that are documented need to be addressed.”

However, Sessions does have some allies in his new tough-on-crime policies.

“First of all, it takes the assets away,” Rep. Peter King (R-N.Y.) told Mic. “It gives the police departments extra money to use, which has been very helpful. To me, it’s been very successful.”

Advocates for reform slammed the Administration’s new policy. Kanya Bennett, legislative counsel for the American Civil Liberties Union, told the Washington Post, “Civil asset forfeiture is tantamount to policing for profit, generating millions of dollars annually that the agencies get to keep.”

Wesley Hottot, an attorney with the Institute for Justice, told Mic, “This is the Trump administration seizing on this issue like it’s some political football and taking us back to an earlier time where abuses were more prevalent.”