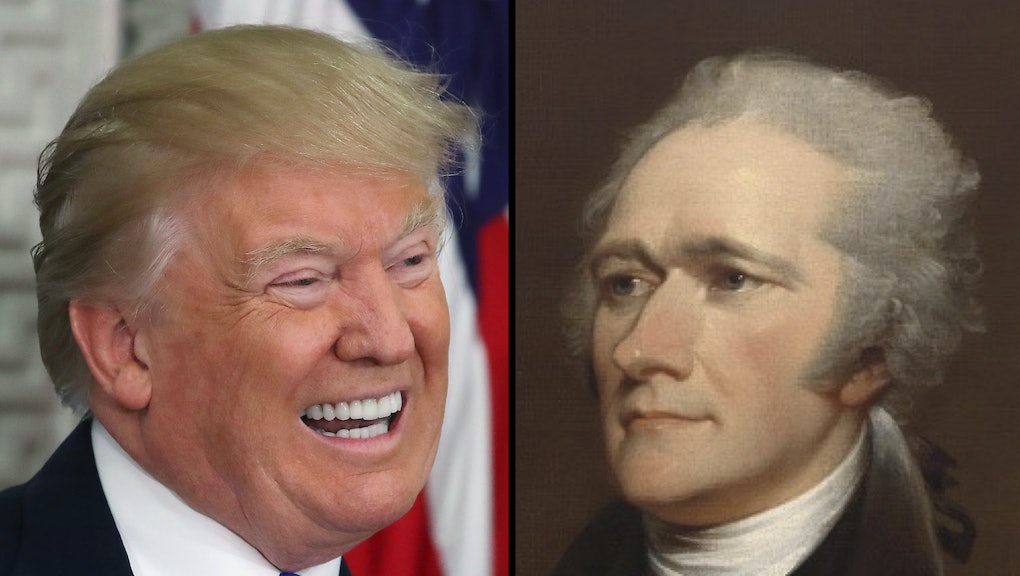 If President Donald Trump tries to pardon himself, one of our most important forefathers may be responsible.

Last week, the Washington Post reported that Trump discussed with aides whether he could pardon himself in connection with special counsel Robert Mueller’s investigation into his campaign’s possible collusion with the Kremlin.

The report set off a flurry of speculation about how far-reaching the president’s pardoning power is. Some experts argued the Constitution doesn’t allow the president to pardon himself. Others said there’s nothing stopping him.

The truth is that we don’t know if the president can pardon himself, because no president has ever tried, and no court of law has ever ruled on the constitutionality of such an act.

But the fact that there’s any debate at all over whether the president can, in essence, declare himself above the law is owed to Alexander Hamilton’s push to grant the executive a sweeping set of powers.

“Hamilton argued for a broad grant of power,” Martha Davis, a Constitutional law professor at Northeastern University, told Mic. “He believed it was important to have a strong executive to make the country strong. That might argue that it was perhaps intended to make [the pardon] so broad as to [allow the president to] pardon himself.”

Whether or not Hamilton thought the president should be able to pardon himself, he did argue for as few restrictions on the pardoning power as possible. “Humanity and good policy conspire to dictate, that the benign prerogative of pardoning should be as little as possible fettered or embarrassed,” Hamilton wrote in Federalist Paper No. 74.

In fact, there’s only one limit on the president’s pardoning power written into the Constitution: that he can’t do it after he’s been impeached.

That restriction was put in place to prevent a president from pardoning himself of impeachment, Paul Rosenzweig, a law lecturer at George Washington University and visiting fellow at the Heritage Foundation, told Mic.

In Hamilton’s view, “the stronger the executive was, the better,” Rosenzweig said.