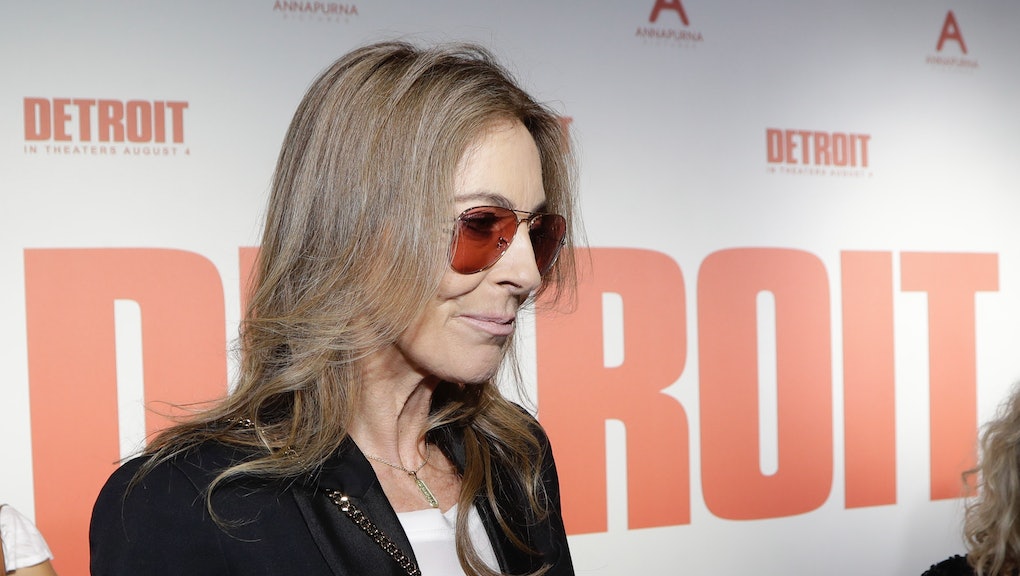 “Trash has given us an appetite for art,” Pauline Kael observed in the final line of her famous 1969 essay “Trash, Art, and the Movies.” She was describing how the pure pleasure young people take in films that are lowbrow — but fun and full of energy — can prime them to become cinephiles later in life. The observation also seems to sum up the career of Kathryn Bigelow, who made some of the most enjoyable pulpy genre flicks of the ’80s and ’90s before gradually transitioning to more serious cinema. When Bigelow became the first woman to win an Oscar for best picture and best director (for 2009’s The Hurt Locker), her transformation to prestige filmmaker appeared to be complete.

These days, Bigelow makes movies that are political, but never sanctimonious. The Hurt Locker followed three soldiers on a team of Army explosive ordnance disposal technicians, one of them (Jeremy Renner) an experienced maverick whose skill at defusing intricate bombs doesn’t quite make up for his addiction to taking unnecessary risks. Released in late 2012, just 19 months after a Navy SEAL team killed Osama bin Laden, best picture nominee Zero Dark Thirty traces the U.S. military’s efforts to locate the al-Qaeda leader through the eyes of a fictional CIA analyst (Jessica Chastain) who has devoted her entire career to the search.

Bigelow’s new film, Detroit, is set amid the 12th Street Riot that shook the city in 1967. The director and her frequent collaborator, journalist-turned-screenwriter Mark Boal, take their time setting the scene: Centuries of racial injustice combine with a brutal police force to turn Detroit into a time bomb, which detonates during a raid on an after-hours party in a black neighborhood.

(Editor’s note: Spoilers for Detroit ahead.)

When the looting and burning commence, law enforcement — the Detroit Police Department, joined by Michigan State Police and the Michigan Army National Guard — barely differentiates between violent criminals and residents just trying to get to work. Meanwhile, the rioters assume everyone who isn’t with them is against them and lash out accordingly, plundering even the businesses whose black owners have painted “soul brother” in their windows. Bigelow is Hollywood’s best action director, and she depicts the city as a war zone, the smoke, shattered glass and crowds illustrating the confusion and moral complexity of the situation with more immediacy than dialogue could convey.

Eventually, a story coalesces around the lively, bohemian Algiers Motel: An aspiring Motown singer (Algee Smith) and his friend (Jacob Latimore) take a room there to wait out the riot. They chat up two young white women (Hannah Murray and Kaitlyn Dever) from out of town. Also staying at the Algiers is a veteran who recently returned from Vietnam (Anthony Mackie). The place feels like a friendly refuge from the battle raging just blocks away — until one of the guests (Jason Mitchell) fires a starter pistol to scare the cops who’ve spent decades scaring him.

His prank quickly turns tragic when the sound attracts a sociopathic DPD officer (Will Poulter, playing a composite character) and his two weak-willed colleagues (Ben O’Toole and Jack Reynor), all of them white. As the police terrorize the motel’s inhabitants amid an incompetent search for the gun that soon escalates into a night of nihilistic, racist torture, the security guard Melvin Dismukes (John Boyega), whose dark skin and uniform earn him limited access to both sides of the conflict, shows up to try and mediate.

Although it’s based on real, 50-year-old events, the story feels as contemporary as Bigelow’s previous two movies by virtue of its tight focus on police violence toward the black community. So many movies about white America’s cruelty — including relatively recent pictures like 2011’s The Help and 2012’s Django Unchained — let 21st-century viewers off the hook, as though racism ended with the Civil Rights Movement. In showing us the same kinds of ghastly, shameful images we now see every week through surveillance and cell phone footage, Bigelow and Boal never let us forget that the progress we’ve made on this issue in the past five decades is negligible, if not nonexistent.

In many ways, Detroit is a success. Bigelow takes a major risk in spending so much time, during the film’s first third, simply making viewers understand what it was like to see a 20th-century American city explode into something like a civil war — and it pays off. As cops argue over who’s at fault for the riots and a mixed audience watches black performers at the Fox Theatre, these early scenes subtly draw out the city’s complicated racial dynamics. Later, when the less-bloodthirsty state police see that the DPD are on the verge of perpetrating a massacre, they leave the Algiers because they don’t want to be implicated. It’s a reminder that the criminal justice system is rigged to protect its most corrupt authority figures. If you aren’t shaking with anger and frustration by the time you leave the theater, you’re probably as cold-hearted as those cops.

But the complexity falls away, for the most part, inside the post-raid Algiers. We’re left with a scenario that does, unquestionably, have a devastating, visceral impact: White men with guns, uniforms and relative impunity kill and abuse innocent black men (and the white women whose chaste interactions with those black men ostensibly pose a threat to white masculinity). Then, of course, they get away with it. Bigelow is unflinching in her depiction of this violence, but to what end? Only the most bigoted and least informed viewers — who will probably skip this movie anyway — will be surprised at how this story develops. Black audiences certainly don’t need to see such a graphic representation of these characters’ suffering to understand it, which makes Detroit yet another film about black pain for white, or at least nonblack, audiences.

This isn’t the first time Bigelow has stumbled in an attempt at social criticism. In 1995, she followed up her exhilarating surfer-heist movie, Point Break, with the sci-fi thriller Strange Days. Scripted by her ex-husband, James Cameron, it was Bigelow’s first project with real political subtext. Just as she does with the after-hours party raid that catalyzes the riot at the center of Detroit, Bigelow employs a dark, propulsive, purposely overwhelming opening to set a distinctive scene in Strange Days: Days before the dawn of the 21st century, a dealer in drug-like virtual reality experiences (Ralph Fiennes) gets sucked into the hunt for an acquaintance’s murderer. Bigelow’s use of immersive, point-of-view shots to approximate the VR experience is masterful.

When the plot starts to reference the Rodney King beating, with cops killing a rapper (Glenn Plummer) during a traffic stop, Bigelow and Cameron’s intentions get muddy. What first looks like a massive police conspiracy ends up being the deranged act of two rogue officers. The perpetrators are punished at the hands of a straight-arrow police commissioner. Fiennes and his love interest, Angela Bassett, finally get together. Any attempt at a political statement is abruptly abandoned. And you’re left wondering: Why invoke a recent incident that revealed the depths of institutional racism when your intention is to depict an essentially fair criminal justice system?

Up until Strange Days, Bigelow had made relatively short, tight, darkly atmospheric genre films filled with cathartic, blissfully meaningless violence. Co-directed with Monty Montgomery, her first feature, 1982’s The Loveless, is a retro biker flick starring a young Willem Dafoe. Its story of a disaffected biker gang wreaking havoc on a small town’s bars and diners is so much fun, it should be a cult classic like the movie that was its clear inspiration, 1953’s The Wild One. Near Dark, from 1987, deftly infuses vampire romance into a stock western shoot-’em-up plot. Bigelow perfected her formula with the bigger-budget Point Break, whose beautifully shot scenes of surfing and bank robbery make up for flat characters and a whole lot of stiff dialogue.

The Hurt Locker, her first genuine prestige film — and first collaboration with Boal — is a masterpiece. It succeeds, in large part, because its plot elegantly unfurls in a series of complex, suspenseful action scenes that play to Bigelow’s strengths, as Renner’s Sgt. First Class William James defuses explosives with alarming calm while everyone else braces for sudden detonation. Tensions mount between him and his team as it becomes clearer that he’s playing fast and loose with their lives. The movie opens with a quote from journalist Chris Hedges: “War is a drug.” And its illustration of what that addiction looks like and why it’s so dangerous — rather than any particular argument about the Iraq War — is what makes The Hurt Locker powerful.

In Zero Dark Thirty, Bigelow and Boal use Chastain’s Maya to put a human face on the hunt for bin Laden. It ends with perhaps the most virtuosic action sequence of Bigelow’s career, a 30-minute, night-vision re-enactment of the SEALs’ raid on bin Laden’s compound that seems to unfold in real time. One gorgeous shot, in which green light floods through the bullet holes in a door, echoes an identical moment in Near Dark. Meanwhile, Chastain’s alternately steely and brittle performance imbues a somewhat underwritten, determined-loner character with depth.

But the film’s graphic scenes of CIA interrogators torturing detainees spurred a debate over whether or not Bigelow supported those tactics. She responded in an essay for the Los Angeles Times: “Those of us who work in the arts know that depiction is not endorsement,” Bigelow wrote. “If it was, no artist would be able to paint inhumane practices, no author could write about them and no filmmaker could delve into the thorny subjects of our time.” Her critics didn’t seem to grasp the movie’s implication that it was not, in fact, torture that surfaced the intelligence used to capture bin Laden, but the simple thoroughness of Chastain’s obsessed heroine. Those viewers were wrong, but Bigelow and Boal still made the major miscalculation of so thoroughly obscuring their point of view that smart people could come away from Zero Dark Thirty believing it was a vindication of torture.

They make the opposite mistake in Detroit, a film with equally stunning action scenes that pummels viewers with the argument that a racist system allows white cops to get away with murdering black men. That message is as obvious as it is laudable and demonstrably true, leaving us with a painful spectacle that stretches on for far too long, as the cops beat, murder and sometimes merely pretend to shoot the black and female guests they’ve treated like hostages. This violence isn’t so illuminating for viewers who may have watched Philando Castile die on Facebook Live.

“What leaves the film feeling grotesque and even a bit exploitative is its soullessness,” Angelica Jade Bastién wrote in a review for RogerEbert.com. “The sweat and blood that drips down the characters’ faces are granted such texture and focus I could practically smell them wafting from the screen ... But there is a noxiousness to the thrill of these scenes and the extreme close-ups of bruised black bodies, because the characters lack interiority.” As a journalist, Boal excels at verisimilitude more than empathy, and that’s why Detroit starts to feel a bit hollow at just the moment when its agenda comes into focus.

With The Hurt Locker and, for the most part, Zero Dark Thirty, Bigelow proved a director can use skills honed in the genre-movie trenches to make nuanced, politically relevant works of art. Detroit, however, suggests she — and her current screenwriter — still can’t quite tell the difference between an impactful film and an important one.