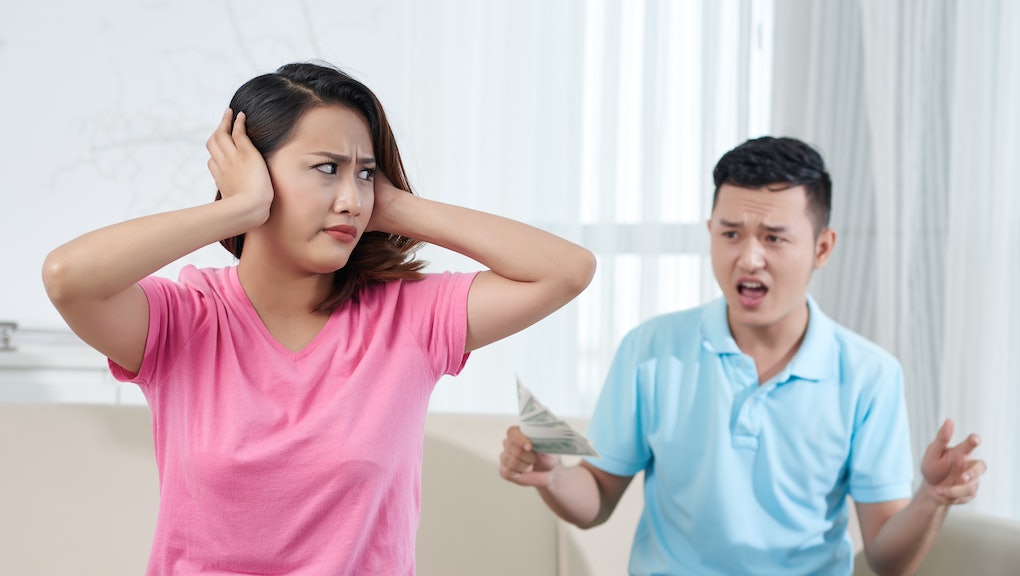 If you have a secret gadget or shoe stash — or find yourself steaming mad when your significant other drains your joint checking account after retail therapy — you may be part of the large number of couples who fight over money. The struggle is real, as almost half of Americans, 48%, in a serious relationship argue about finances, personal finance site the Cashlorette found in a new survey.

“The most common dispute is how the other person is spending money,” Sarah Berger, founder of the Cashlorette said in a phone interview. “Whether one person is being too frugal or the other is spending too much, how money is spent seems to be where most of the arguments start.”

In fact, 60% of respondents who admitted to arguing about finances in the Cashlorette’s study said that the way money is spent is the problem.

Miscommunication can happen early on, Berger said: “Different approaches or views about money start well before a couple enters a serious relationship.”

And generational differences may also influence how couples behave: “During the dating phase, we found that while women are more likely to let the other person pay for the date, millennials in general are more likely to split the bill,” she said. Indeed, the study notes that 33% of millennials prefer to split the bill, as compared to only 17% of Gen Xers.

In general, men and women across all ages had different responses about whose responsibility it is to pay the bill on first dates — and how much is best to spend.

Money arguments are a top predictor of divorce

Not having a clear view of how your partner views money could mean trouble later in the relationship. “Arguments about money is by far the top predictor of divorce,” Sonya Britt, a researcher at the University of Kansas said in the K-State News. “It’s not children, sex, in-laws or anything else. It’s money — for both men and women.”

That’s why, once you’ve progressed beyond early dating, you should try to have a good handle on how your romantic partner views money. “You don’t have to share your credit score or salary with that person, but discussing how you view and value money is important,” Berger said. This could mean letting your new partner know you appreciate saving over spending or that you like to treat yourself once a week.

Britt found it takes longer to recover from a money argument more than any other kind of dispute, and if the conflict endures, the relationship ultimately suffers. In some cases, one partner may think they can avoid a money argument by hiding money or purchases.

About one in five say they’ve hidden purchases of $500 or more from their partner and 6% have a secret bank account, according to a 2015 study by CreditCards.com. In some cases, secret expenditures can take a darker turn, as some people will open credit cards under their spouse’s name or go deeply into credit card debt, unbeknown to their partner. Hiding money or secretly going into debt may have disastrous consequences.

While the data sounds ominous, not all couples are destined to butt heads over finances. A good place to start is with healthy communication. “Once you move in together or get married, it is a good idea to share your credit score with your partner,” Berger advised. “You can tell how that person is going to approach credit too if they seem casual about a bad score, which is important if you want to buy a home, for instance.”

Once you know where your partner stands with credit and money, what else can you do to reduce the likelihood that money will tear you apart?

While conventional wisdom says to pool your finances once you marry or are in a committed relationship, maintaining your own account should be explored as one way to reduce arguments, as USA Today suggests. Advantages of the joint account generally include simplicity, flexibility and greater independence. More arguments are bound to occur when you share an account, debt becomes a bigger issue and you may feel limited in your spending, especially if one person earns higher income.

You don’t have to keep all your money separate, but Berger recommended having a “freedom fund” or a separate account that allows you to save and spend as you please. “Set this expectation early on too so it sets the tone and allows you to continue to pay for yourself,” she said. Here and here are a few bank accounts that pay you back generously.

Don’t appoint one person in charge of the money or bills, but rather share the duties equally, the American Psychological Association suggests. Approach money and budgeting like you would any other business meeting and establish a regular day and time for money discussions. During this time you can pay bills, discuss your budget and explore your savings plan. Spice up this time by adding in a fun activity afterward like going to the movies or dinner in order to reward your teamwork.

Money meetings should be a time for calm discussion, so if talks become combative, walk away but agree to revisit the topic at a later date, the APA advises. Talk to a licensed psychologist or financial planner if you deadlock on issues — in some cases, a mediation session may help you work through financial hurdles.

You may not understand why your partner just dropped $750 on parts for her bicycle, but either way it’s important to open the lines of communication to try to understand your significant other’s psychology toward spending and saving. Everyone comes to a relationship with a preconceived notion of money, which influences their spending and saving habits, as CNN points out.

So while it may be tough not to roll your eyes at how your partner handles money, getting to the root of why could lessen your annoyance.

You can also head off money issues before you move into together by establishing financial rules or guidelines beforehand, such as how you will pay the rent, food and utilities.

For more advice, here are a few other ways you can avoid falling deeply into financial despair with your significant other, as well as useful ways to effectively communicate money goals with your partner — to decide if you want to combine finances at all.