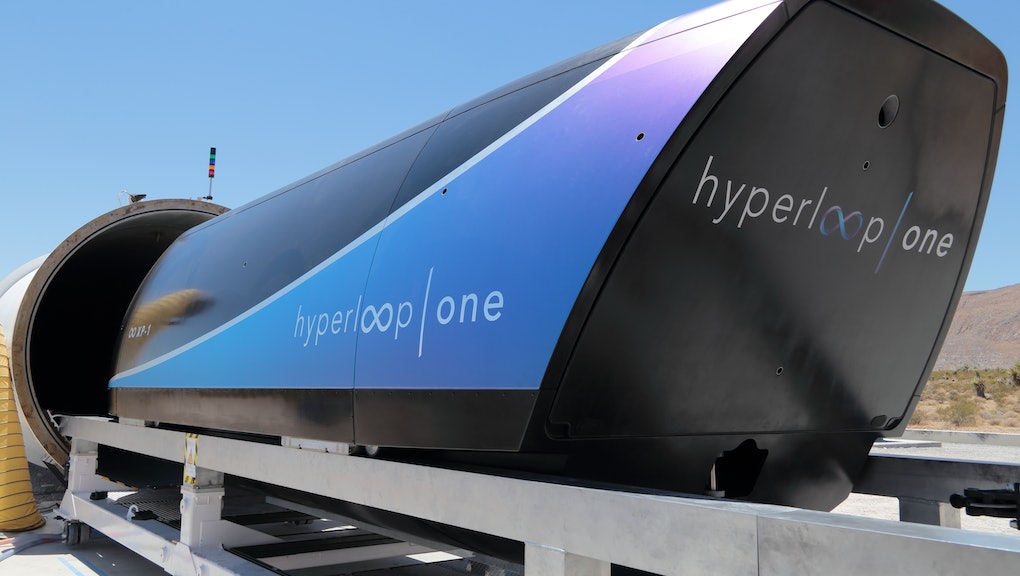 Hyperloop One finished its second phase of testing on July 29 with some seriously impressive results. Its slick pods hurtled through a 500-meter test track on Nevada desert land at about 192 mph.

That speed is still slightly slower than Japan’s Shinkansen bullet trains — which can travel at about 200 mph — and more than 70 mph slower than Shanghai’s Maglev train. The difference, however, is that Hyperloop One executives claim their pressurized tube can already transport passengers at speeds faster than cruising passenger jets.

“Another 2,000 meters [of track] would take us to 700 miles per hour,” Rob Lloyd, CEO of Hyperloop One, told Mic by phone. He said their nearly 200-mph run is the fastest known test made by any hyperloop.

To be clear, Hyperloop One is a separate venture from the hyperloop created by Elon Musk’s well publicized Boring Company (Musk’s 2013 white paper was no doubt a “catalyst”). Hyperloop One’s tubes can be built underground or on columns above ground, according to the company’s fact sheet, and they use magnetic levitation to avoid slowing down their XP-1 passenger pods with aerodynamic drag. The company is one of several racing to build this transportation of the future — even its ousted co-founder, Brogan BamBrogan, threw his hat in the ring earlier this year. He recently started Arrivo, another hyperloop company, after a dramatic lawsuit that accused his colleagues of financial misconduct, physical intimidation with a noose and nepotism, among other things.

Previous issues aside, Hyperloop One seems to be pushing onward. Based in Los Angeles, the company hopes to have three commercially-operable systems built by 2021, which means it would be fully up and running, carrying passengers or cargo. Hyperloop One is currently conducting feasibility studies in the United States and other countries, Lloyd said.

These studies basically determine whether hyperloops make sense for certain regions, whether or not they’ll be economically viable and what the route itself would look like.

“We’re really turning our attention seriously to commercialization of the technology,” Lloyd said. “And that really does mean being comfortable having conversations with governments and transportation regulators to say, ‘Look, the technology works, now come and see it and let’s starting apply [it] to solve your toughest transportation challenges.’”

It’s true that the U.S. could seriously benefit from some innovative transportation. In 2017, the American Society of Civil Engineers gave U.S. infrastructure a disappointing D+ grade, just a few notches above complete failure.

“One thing that is abundantly clear is that governments and transportation authorities are looking for something new to solve their problems,” Lloyd said, “because the challenges we have today are bad and they’re getting worse.”

In a proposal, Hyperloop One mapped out possible routes submitted by teams across the U.S. that could streamline American travel where it’s needed most. They include a trip from Miami to Orlando, Florida, in under 25 minutes, Portland, Oregon, to Seattle in less than 18 minutes and Dallas to Austin, Texas, in under 20 minutes. All of these routes are roughly a three hour drive, according to Google Maps.

Though the United States is notoriously slow on building transportation infrastructure, Lloyd said he is “seeing some really innovative states that are really moving quickly and adapting,” and that Hyperloop One is “working with departments of transportation in several states,” along with other government bodies, to assess possibilities.

“If one of those three projects that we develop and deliver by 2021 is not in the United States, that would be a very, very disappointing outcome,” he said. He also believes that the first cities to build hyperloops will likely “lead to jobs” and “permanent tech clusters.”

For the high-speed traveler, ticket prices are tough to estimate. Nevertheless, projections show that routes in Finland and Sweden mainlands could cost about 18 euros, or a little over $21.

“Ticket pricing will be the at the same price or lower than the alternative mode of transportation,” Lloyd said. In some cases, models have suggested that ticket prices could be less than $5, though other routes might be about $70 if the only other mode of transport is, say, a $100 plane ticket.

“This is not intended to be an elite transportation system,” he said. “It should be affordable for everyone.”