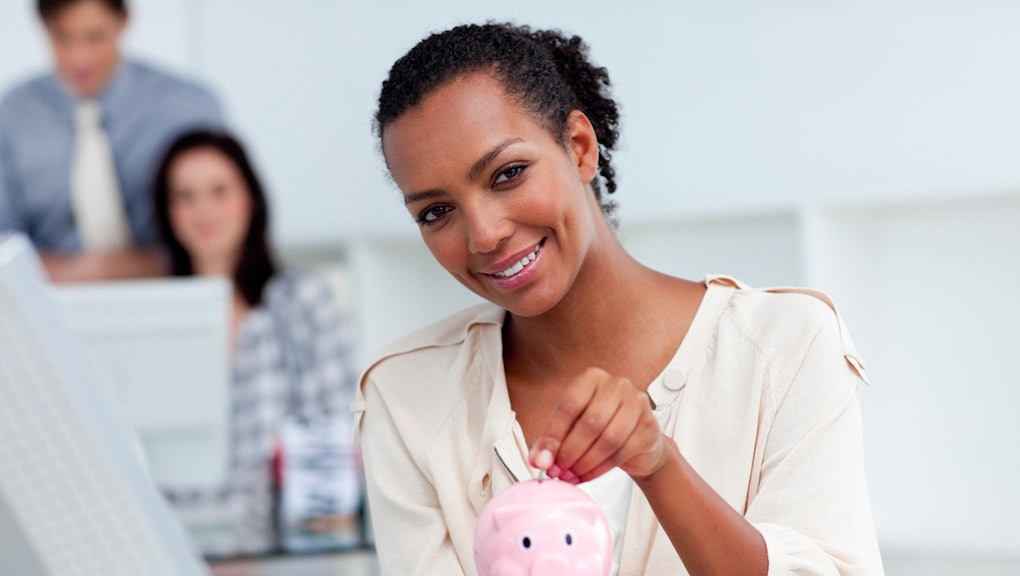 Feel like you’re constantly spinning your wheels when it comes to saving money only to end up in the red each month? You may think that getting a raise is the only way to solve your money problems, but that won’t help you build real wealth if your living expenses keep going up, too.

Living paycheck to paycheck isn’t just a problem for those with modest incomes. Nearly a quarter of households with incomes between $100,000 and $150,000 face the same conundrum, according to a 2015 Nielsen report. Otherwise known as “lifestyle creep,” the tendency to upgrade to a bigger home, buy nicer cars and take more extravagant vacations goes hand in hand with increases in income.

If you want to grow your net worth and become a millionaire someday, you need to study the habits of people who’ve already reached that milestone. Thomas Corley, author of Rich Habits: The Daily Success Habits of Wealthy Individuals, and founder of Rich Habits Institute, did just that. After interviewing 177 self-made millionaires, Corley found that 83% got rich simply by living below their means.

In other words, getting rich isn’t about winning the lottery or making a genius investment. “It comes down to developing the right spending and saving behaviors,” Roger Ma, a New York-based financial planner told Mic by phone. “It’s actually pretty simple. Increasing revenues through a higher salary or side hustle, decreasing expenses or doing a combination of both.”

Here’s how you can follow the spending habits of self-made millionaires and reach your own financial goals.

When you get a pay bump, it’s tempting to go on a shopping spree and spend like there’s no tomorrow — at least until you get your next credit card bill. But that’s a mistake.

Instead, think like a squirrel and always keep a stash set aside for the lean times. Not only will it come in handy for unexpected expenses, it can also give you the financial freedom to take a year off, for example, or save up for something you really want.

The best way to accumulate savings is to pay yourself first by automating your savings. “Savings accumulates at a rapid pace when you are young,” Corley explained to Mic. This essentially forces you to live on what’s leftover.

How much should you save? “The consistency of saving at least 10% of your pay from your very first paycheck is the pathway to becoming a millionaire,” Greg McBride, chief financial analyst at Bankrate, told Mic in an email. “But you have to automate this by having direct deposit from your paycheck into a savings account and having a payroll deduction into your 401(k).”

For example, “Someone making $50,000 per year that has the discipline to save 10% of their pay from the time they’re 21 will accumulate $1 million by age 65,” McBride said. “Discipline and the power of compounding are key.” This assumes you only get a cost-of-living raise during your entire career, always save 10% of your pay and earn an after-inflation return of 6% per year.

“If you want to save money, don’t associate with people who love to spend,” Corley advised. “And avoid toxic people who may always have an issue, especially one that involves you having to give them money.”

Love to shop with friends? Then find your cheapest buddies and hit thrift shops and sales racks. When it’s time to eat and drink, hit up happy hour deals and lunch specials, which are less expensive than regular menu items. Better yet, invite your pal over for a beer or meal to celebrate your spoils.

You can also use the buddy system when it comes to spending on celebrations like birthdays, anniversaries, weddings and baby showers. Instead of paying for everything separately, consider going in on gifts with friends (since you can often get a better deal on larger purchases), sharing a hotel room for a destination wedding or offering to make a salad or bring soft drinks for a birthday party.

3. Don’t try keeping up with the Kardashians

Sure the Kardashian lifestyle is glamorous, but trying to emulate them is the wrong path to becoming a self-made millionaire. “Boats, yachts, private planes, first-class flying [and more] means less money that can be put into savings and less money that can invested in order to generate passive income or investment gains,” Corley said. “The money is gone forever.”

Housing is the biggest monthly expense for most people and should not consume more than 25% of your gross monthly salary. If you’re sick of your tiny home or apartment and are tempted to spend more after a raise, consider making more modest upgrades instead, like giving your place a fresh coat of paint, replacing ugly knobs on your kitchen cabinets or decorating with a new couch or floor rug.

Use the same budget mentality when it comes to buying a new car. Purchasing a year-old preowned car can save you 27%, according to Edmunds. And don’t fall into the trap of spending “20% of your monthly take-home pay” on car payments. Instead, use a loan calculator and consider a vehicle that you can afford long term, especially if your job or financial situation changes.

The average millennial spends about $183 a month going out and on coffee and food on the fly, according to a 2016 study by TD Bank.

Sound like you? If you’re prone to impulse buys on food or clothing or have no idea where a big chunk of your money goes, it’s time to practice some “sober spending.” One trick is to wait at least 24 hours before your buy something you hadn’t thought of until you saw it. Consider writing down what you buy and spot your purchasing weaknesses so you can steer clear of — or at least limit — those triggers.

Also, keep an eye on your food budget both at the grocery store and in restaurants. Don’t order more than you can actually consume (of course everything looks good too when you go out hungry) and don’t fall for cute or delicious packaging at the grocery store before checking prices.

Just because you have a game plan doesn’t mean you have to live like Oliver Twist. You can still have your cake and eat it, too, so long as you can actually afford it.

Before you spend on a trip to Europe, for example, review your weekly and monthly spending to see where you should cut back to afford your fun. Ideally, you want to have saved up the money for your vacation before you ever get on the plane.

Can’t swing it without going into credit card debt? Consider traveling somewhere closer to home or look for less expensive lodging if you’ve already booked your flight. (It’s a lot easier to get out of an expensive hotel reservation than it is to change a flight without racking up cancellation fees.)

The next time you want to treat yourself, start planning before you commit to the purchase. If you don’t have the cash on hand, create a special fund or money bucket dedicated to your endeavor. Once you reach your goal, feel free to spend every dime you budgeted.