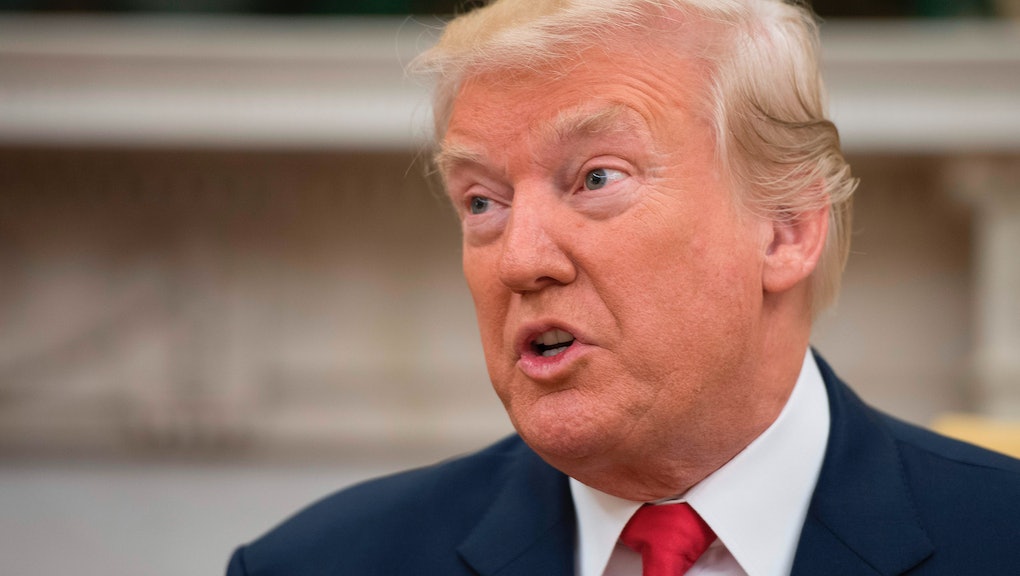 Are Trump’s North Korea tweets in violation of Twitter’s terms of service? Experts say no.

When, if ever, does Twitter have the responsibility to stop the president of the United States from tweeting?

It’s a question that became relevant again on Friday morning, when President Donald Trump tweeted that the U.S. military was “locked and loaded” and warned North Korean dictator Kim Jong-Un to abandon his country’s nuclear program – rhetoric some experts said was likely to increase tensions along the 38th parallel, already one of the most fraught places on Earth.

It was easy to draw comparisons to the Cuban Missile Crisis, in which the United States and U.S.S.R. came to the brink of nuclear war after Soviet leader Nikita Khrushchev ordered nuclear missiles deployed to Cuba and President John F. Kennedy responded by ordering U.S. ships to blockade the island.

But the fact that social media hadn’t been invented yet wasn’t what kept the Cuban Missile Crisis from escalating to full-blown nuclear war, Jim Hershberg, professor of history and international affairs at George Washington University, said in an interview.

“The quality of leadership was a lot more important than the means of communication,” he said. “What’s important was that Kennedy and Khrushchev were doing their best to keep a lid on things and would not have dropped Twitter bombs and made the situation even more dangerous than it was.”

But if Kennedy and Khrushchev had been dropping “Twitter bombs,” would it have been Twitter’s responsibility to stop them? No, Hershberg said. “It’s not up to Twitter to prevent nuclear war. It’s up to people much more powerful in the chain of command.”

Those people include Defense Secretary James Mattis or National Security Director H.R. McMaster or even Secretary of State Rex Tillerson – people Hershberg called “the adults in the room.”

There’s historical precedent for that: According to some historians, at the height of the Watergate scandal, Defense Secretary James Schlesinger, fearing President Richard Nixon would start a war in a drunken stupor or fit of rage, ordered the Joint Chiefs of Staff not to obey any order from the president that didn’t also bear his signature.

But Twitter doesn’t bear the same responsibility for the president’s actions as his cabinet secretaries, Timothy Edgar, senior fellow in international and public affairs at Watson Institute for International and Public Affairs at Brown University, said in an interview.

“Twitter should just apply its terms of service in the same exact way as they would apply to any other Twitter user,” he said. “Under that standard, I think it’s pretty unlikely Twitter would ban Donald Trump.”

That’s because Twitter has taken a very pro-free speech stance, Edgar said, refusing to intervene in all but the most egregious cases of hate speech and incitements to violence. The last time Twitter barred a well-known figure from its platform was July 2016, when it banned right-wing provocateur Milo Yiannapoulos.

And, while Twitter’s rules do bar “violent threats,” it’s not realistic that the president of the United States would be held to that standard, he said.

“If this was some guy in a cave somewhere they’d ban him, but he’s not. He has the right to use military force, at least under some circumstances, and when he does, whether he does, is not really something for Twitter to decide,” Edgar said.

Further, if Twitter suspended or banned Trump, it would have a harder time saying no to authoritarian regimes when they ask for dissidents to be banned, he said. “Twitter gets an enormous amount of pressure from authoritarian governments around the world to ban voices they disagree with,” Edgar said.

Which is not to say Trump’s tweets are a good idea.

“If I were working in the White House I would never advise that sort of commentary,” Scott Snyder, director of the program on U.S.-Korea policy at the Council on Foreign Relations, said of the president’s tweets.

“I guess if he starts a war,” Twitter could ban him, Snyder said. “Short of that, I’m not sure. It’s such an unprecedented situation.”