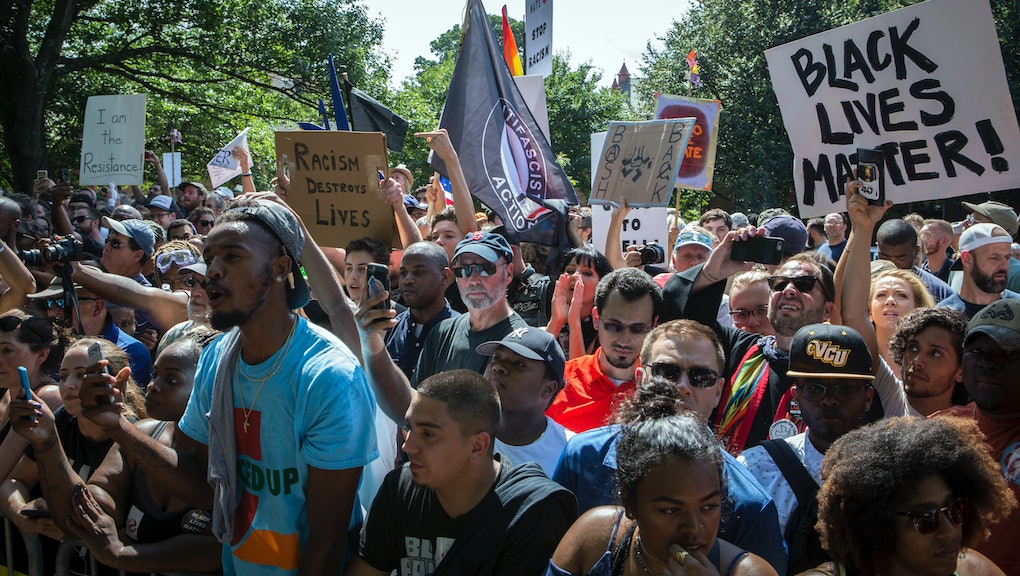 Civil rights leaders and activists in the Black Lives Matter movement on Saturday blamed President Donald Trump for the deadly violence against anti-racist protesters over the weekend in Charlottesville, Virginia.

Although Trump has denounced the violence perpetrated by white supremacists in Charlottesville on Friday and Saturday, his failure to namecheck white supremacy as the culprit is an insufficient response, activists and leaders said in searing statements.

“The hatred and bigotry that Donald Trump inspired has been on full display in Charlottesville last night and today,” Brandi Collins, senior campaign director for media and economic justice at Color of Change, said in a statement. “Armed white supremacists marching with torches through the streets have raised the very real specter of racial terrorism.”

White supremacists, neo-Nazis and Ku Klux Klan supporters clashed violently with clergy, BLM activists and anti-fascist protesters in Charlottesville over the last two days. First, neo-Nazis marched through the University of Virginia in Charlottesville on Friday night, where black students and people of faith held a prayer meeting. On Saturday, a variety of white supremacist groups met for the so-called “Unite the Right” march and rally, which was staged in response to proposed removal of a statue of Confederate Gen. Robert E. Lee from a public park in the college town. The violence left at least one dead and dozens others injured, according to news reports on Saturday.

From groups within the Movement for Black Lives to legacy civil rights organizations such as the NAACP, activists and leaders made a near-unanimous call for Trump to acknowledge that his own rhetoric on immigration and law enforcement has emboldened terroristic violence by white supremacists.

The Black Lives Matter Global Network said the Trump administration is responsible for an increasing threat against safety in communities of color. But the network of 40 member-led chapters said the Charlottesville events were also emblematic of hatred that is embedded throughout the country.

“While the president and his advisors significantly contribute to the lack of safety that black folks experience and are accountable for incredible harms inflicted on communities of color, they are mere symptoms of white supremacy and xenophobia, which are far greater enemies than just one administration,” the BLM Network said in a statement first shared with Mic on Saturday. “We stand with the people of Charlottesville who are fighting for a world in which the inherent humanity of all people is honored.”

Amid an uptick in attacks against people of color, Muslims, immigrants and the LGBTQ, Trump must also rid his administration of officials with ties to white supremacist hatred, the activists and leaders said.

“While we acknowledge and appreciate President Trump’s disavowment of the hatred which has resulted in a loss of life today, we call on the president to take the tangible step to remove Steve Bannon — a well-known white supremacist leader — from his team of advisers,” Derrick Johnson, interim president and CEO of the NAACP, said in a statement released Saturday. “Bannon serves as a symbol of white nationalism and his high place in the White House only energizes that sentient.”

Civil rights leaders said Trump’s failure to speak up following other deadly white supremacist violence — and his being reliably vocal after incidents of Islamic terrorism in other nations — sends the wrong message to culprits.

“The administration’s silence in the wake of white supremacist violence in Portland, Maryland and Minnesota, and lackluster response to the open support of notorious white supremacists has constituted an abdication of the kind of leadership we should expect from our president,” Sherrilyn Ifill, president and director-counsel of the NAACP Legal Defense and Educational Fund, said in a statement.

“Indeed, the president’s refusal to speak forcefully and unequivocally against white supremacy has laid the foundation for today’s march and violent confrontation,” Ifill said.

According to the Southern Poverty Law Center, an Alabama-based civil rights organization known for its anti-hate work, reported hate violence has spiked since the Trump’s election victory in November.

“His calls for the country to unite will continue to be meaningless as long he fails to take responsibility for his role in dividing it — something he conspicuously avoided again during his press conference today,” SPLC President Richard Cohen said in a statement Saturday.

Vanita Gupta, the former head of the Department of Justice’s Civil Rights Division under former President Barack Obama, has called on the FBI to investigate how the violence in Charlottesville fits in with a trend of white supremacist violence.

“The white supremacist rallies this weekend and the ongoing violence in Charlottesville are un-American and unacceptable,” Gupta, who is now president and CEO of the Leadership Conference on Civil and Human Rights, said in a statement. “They run counter to the values of justice, fairness, and inclusivity that we uphold as a country.”