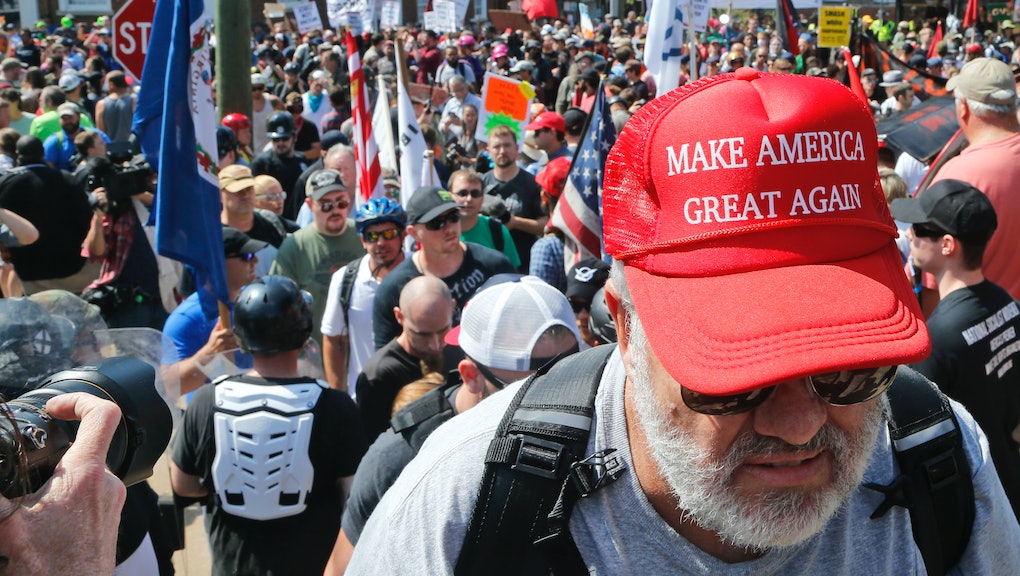 Here are the hate groups that took part in the “Unite the Right” rally in Charlottesville, Virginia

A rally in Charlottesville, Virginia, aimed at bringing disparate groups of right-wing Americans together into a single coalition spiraled into violent chaos on Saturday, leaving three dead and many more wounded.

President Donald Trump initially blamed “many sides” for the violence — remarks that drew criticism from both sides of the political aisle. In a speech Monday from the White House, Trump allowed that “racism is evil — and those who cause violence in its name are criminals and thugs, including KKK, neo-Nazis, white supremacists and other hate groups are repugnant to everything we hold dear as Americans.”

Who were some of the hate groups present at the rally on Saturday? Here’s what to know about four of them: Vanguard America; League of the South; Identity Evropa; and the Traditionalist Workers Party.

Vanguard America is a white nationalist group that calls for the United States to become a fascist state. It wants, in its own words, “a new Caesar to revive the American spirit.” Like other white nationalist groups, Vanguard America wants a white state by and for white people. It seeks an end to immigration by “incompatible” immigrants, claims homosexuality is unnatural — and, therefore, evil — and opposes capitalism and globalism.

Its slogan, “Blood and Soil,” comes from Nazi Germany.

James Alex Fields Jr., who was arrested in the car attack that killed 32-year-old Heather Heyer, was suspected of being a Vanguard America member after a photo allegedly taken at the rally appeared to show him carrying one of the group’s shields. The shield bore two crossed fasces — images of authority used since Roman times, from which the English word “fascism” derives.

Vanguard America denied it had ties to Fields, the New York Times reported.

Vanguard America is led by Dillon Irizarry, a military veteran from New Mexico, according to the Anti-Defamation League.

League of the South

The League of the South is a neo-Confederate group that bills itself as a “Southern nationalist” organization, and wants a whites-only nation roughly along the lines of the Confederate States of America. It also believes the Civil War was fought over states’ rights, not slavery, and believes the war ended with the illegal occupation of the South by the North.

The League of the South wants a government with less clear boundaries between church and state and far fewer regulations in general. It would abolish most taxes and do away with most banks.

“At its core, the South is British-Western European and Christian,” the group states on its website. “Should this change, then the South as we know it shall be no more.”

One of those arrested at Charlottesville for beating a counterprotester may be a member of the group’s Florida chapter, according to the Southern Poverty Law Center.

Its founder is Michael Hill.

Identity Evropa — which styles its name in Latin, hence the “v” in place of a “u” — is a white supremacist group that peddles debunked racial science to its members, teaching them that white people are more intelligent than black people.

It also seeks a complete end to immigration, and argues that European culture is under threat worldwide. It works extensively on college campuses.

Peter Cvjetanovic, who was infamously photographed holding a Tiki torch and snarling, wore a shirt with Identity Evropa’s logo on it.

Its founder and leader, Nathan Damigo, was arrested for punching a woman in Berkeley, California, earlier this year.

The Traditionalist Workers Party describes itself as a political party created “by and for working families.” Hate watch groups describe it as a white nationalist group that pins the blame for many of the world’s problems on Jews.

Like many other white nationalist groups, it also wants a complete ban on immigration.

It was founded by Matthew Heimbach and Matthew Parrot around 2015.