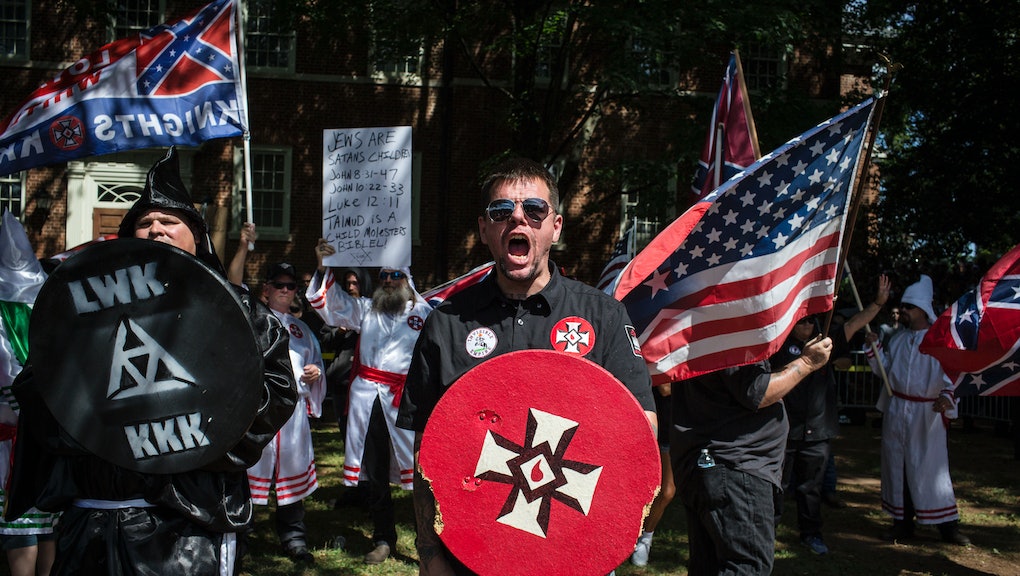 A timeline of major 2017 pro-Trump, anti-Trump clashes before Charlottesville

The hate-filled, racially-charged violence in Charlottesville, Virginia, on Saturday was far from the first violent culture war clash in 2017.

The alt-right demonstrators are frequently confronted by anti-Trump progressive groups, including militant antifa and anarchist factions.

There have been pro-Trump “free speech” rallies in progressive centers and on college campuses, conservative monument protests, and so-called anti-Sharia demonstrations.

Spokesman Ryan Lenz of the Southern Poverty Law Center, a hate group watchdog, says the white nationalists’ goal for these events is to capitalize on the election of Trump and his nationalist rhetoric to recruit more mainstream white Americans to join their racist cause.

“Since Trump’s election, the nascent alt-right has tried very hard to engage in a real-world venue to confront the left,” Lenz said Tuesday. “Increasingly the alt-right is finding they have managed to trigger extreme elements of the left into confrontations, the likes of which we are seeing more and more.”

Antifa’s objective, according to Lenz has been to prevent so-called conservative “fascists” from publicly espousing their political views.

“[The] more militant elements of the left have come out and engaged in violence to silence,” Lenz said.

Here’s a timeline of what’s happened since Trump took office.

The University of California at Berkeley has been ground zero for the pro-Trump, anti-Trump culture war, with at least three violent clashes taking place there since Trump’s inauguration.

The first was when notorious internet troll and former Breitbart writer Milo Yiannopoulos was invited by college Republicans to host a speaking engagement on campus.

Progressive groups argued Yiannopoulos promotes hate speech and tried to shut down the event, which ultimately was canceled for safety concerns before protesters, including members of “black bloc,” fought with police and set fire to trash in the streets.

March 1: Battle of Berkeley I

Conservatives and alt-righters outraged that Yiannopoulos’ event had to be canceled staged a “free speech” rally in Berkeley a month later. They, too, were confronted by antifa protesters, which led to a brawl dubbed the “Battle of Berkeley.”

During the rally, a riot-gear wearing, shield-wielding Trump supporter named Kyle Chapman was filmed cracking an antifa demonstrator over the head with a stick.

Alt-right web trolls dubbed him “Based Stickman the Alt-Knight” and made him a pseudo internet celebrity. Since then, other costume-wearing, stick and shield-wielding alt-righters, including the helmeted “Based Spartan” have shown up to battle antifa protesters.

Literal fireworks were launched and at least 20 people were arrested.

May 1: May Day riots - Portland, Oregon

May 7: Battle of New Orleans

Multiple arrests were made as white nationalists and neo-Confederate sympathizers clashed with progressive protesters over the New Orleans City Council’s decision to take down a statue of Robert E. Lee.

The first of three Charlottesville, Virginia, demonstrations so far was led by alt-right leader Richard Spencer, whose tiki torch-carrying followers lit up a city park on May 13.

They were protesting the city’s decision to take down a statue of Confederate Gen. Robert E. Lee.

Libertarian activist Joey Gibson and hundreds of his alt-right allies hosted another Pro-Trump free speech rally in the city of Portland, which took place less than two weeks after a white nationalist that previously attended one of Gibson’s rallies fatally stabbed two men in the neck who were defending two women of color on a commuter train.

Violence eventually broke out at the June 4 rally after flash bang grenades went off and police began arresting antifa demonstrators at an adjacent protest.

Four arrests were made at the Colorado state capitol building in Denver when the alt-right’s Proud Boys joined Bikers against Radical Islam to organize an anti-Sharia rally where they were confronted by progressive demonstrators.

The Ku Klux Klan, which recently consolidated its forces to capitalize on the increasing popularity of white nationalism, staged their own pro-monument protest in Charlottesville on July 8 where their members engaged in several skirmishes with progressive activists.

Violence not just confined to protests

In addition to Heyer, several other people, including Timothy Caughman and Richard Collins III, have been killed during hate-fueled lone wolf attacks by white nationalist sympathizers.

Lenz says the alt-right are planning future events like the one in Charlottesville across the U.S.

“They have increasingly moved into public forums to coalesce around issues that cut right to the heart of white nationalism in America,” he said.