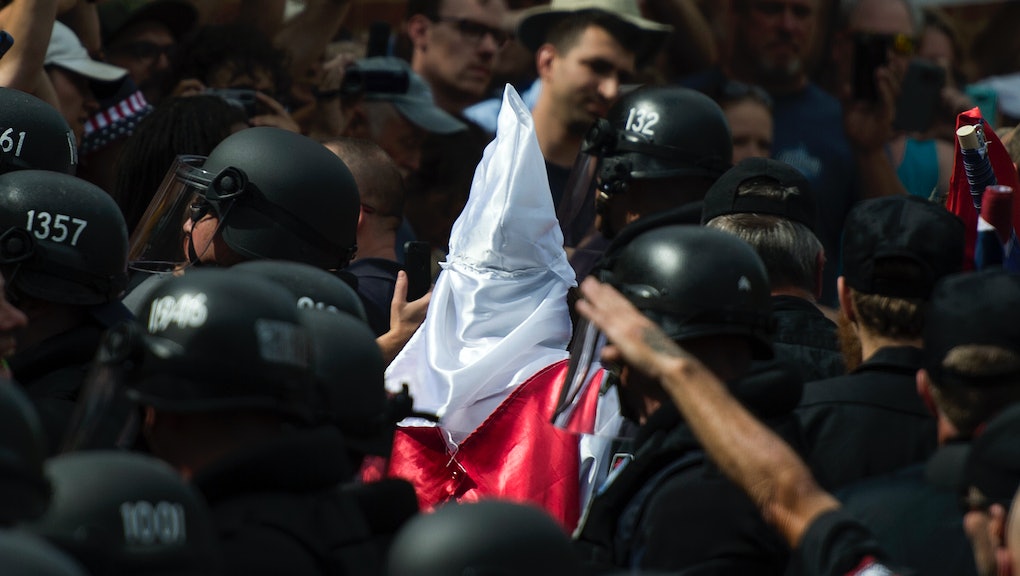 The internet empowered Charlottesville white supremacists. It still has the power to destroy them.

“Life sucks as a racist,” Arno Michaelis told Mic. “Life sucks when you’re afraid of everyone else on Earth, and it’s completely unnecessary. It’s just absolute concocted nonsense that doesn’t have to happen and will literally make every single thing you try to do go to shit.”

Michaelis should know: He used to be a leader in the white supremacist movement.

Michaelis admittedly grew up in an idyllic community in a well-to-do Milwaukee suburb where he lived with his parents who supported his dreams and aspirations. But it wasn’t enough for the rebellious teen, who by the age of 17 was openly and deeply involved in the white power movement.

“I felt like I’m a rebel. I’m bucking the system. I’m bucking the status quo by fighting for my people,” Michaelis, who previously spoke to Mic for a video, said as to why he joined the movement in the first place.

As Michaelis explained, he was so committed to the white power movement in the late 1980s that he would “pound the pavement” to speak to others about the cause, read alternative newspapers to stay up-to-date and order racist goods via snail mail. But now, he said, kids like the kid he was have to look no further than the internet to feel validated in their racist beliefs.

“Cognitive dissonance is so much easier because of the internet,” he deftly explained.

“Cognitive dissonance is so much easier because of the internet.”

For Michaelis, getting out of the white nationalist movement was easy. He simply found himself exhausted from having to spend “every single day spinning everything that happens to you to suit that narrative,” which is what several of the young Unite the Right attendees in Charlottesville, Virginia, appeared to be doing.

“I’m not the angry racist they see in that photo,” 20-year-old college student and Unite the Right attendee Peter Cvjetanovic told Channel 2 News.

“I came to this march for the message that white European culture has a right to be here just like every other culture,” he said. “As a white nationalist, I care for all people. We all deserve a future for our children and for our culture. White nationalists aren’t all hateful; we just want to preserve what we have,” he said, explaining that removing the statue of Confederate General Robert E. Lee in Charlottesville was somehow denigrating the white race in America.

And it’s ideas like this — that a nearly century-old statue could possibly symbolize the demise of the entire white race — that are the reason Michaelis left the white supremacy movement to become a “peace-builder” through his work as an author, speaker and positive-choice activist.

“As human beings we find what we look for in life,” Michaelis said. “If you want to believe that the white race is oppressed and endangered and that everybody is out to get us and we’re going to be wiped out, you will find that left and right. You will find [that] everywhere you look.”

But Michaelis added that leaving the hate community may be harder than ever, thanks to the proliferation of information available on the internet.

With sites and social media channels spreading the message of hate, it’s hard to ignore that the white nationalist media message of “you will not replace us” is spreading, fast.

Dr. Jason Chan, an assistant professor of information and decision sciences, has empirically proved this to be true via his research assessing the availability of broadband internet and its correlation to an increase in hate crimes. In fact, as Chan explained of his research, the addition of just one broadband provider in a region led to as much as a 20% jump in race-related crime.

“Because Google and other search engines are so good at what they do, if the person starts out with racial bias, slowly, he or she can get links to articles or thoughts that are even more radical,” Chan told Mic. “From there, he or she gets connected to other folks, and they sort of drag him down to another level and it just sort of spirals down from there.”

And that previous racial bias is key, Chan explained, as his research also showed that areas with neutral racial thoughts did not see an increase in race-related crimes as the internet became more readily available. But even if there is a spark of hate inside someone, the world wide web is all the kindling it needs.

“Because the internet is a medium that everyone has access to, the person can go very, very deep,” Chan said.

So how can we prevent people from simply hitting “search” to find all the answers they are looking for? By educating people, Chan said, on thinking critically about what they read as racists are “very skillful in twisting the plot and making themselves look like victims.” But, also, Chan shared the controversial idea of rethinking what is allowed online altogether.

And the professor isn’t alone in his thinking.

As a YouTube spokesperson explained to Mic via email, the video-sharing site will soon be applying “tougher treatment to videos that aren’t illegal but have been flagged by users as potential violations of our policies on hate speech and violent extremism.”

The spokesperson further explained that if it finds videos do not violate these policies but contain controversial religious or supremacist content, they will be placed in a limited state.

“The videos will remain on YouTube behind an interstitial, won’t be recommended, won’t be monetized and won’t have key features including comments, suggested videos, and ‘likes,’” YouTube explained. The new treatment will come into effect in the coming weeks and will likely affect channels owned by people like James Allsup, who was mentioned on Twitter and named by the account @YesYoureRacist.

Allsup, who is a YouTube partner with more than 145,000 subscribers, however, didn’t seem to mind his newfound social media attention and instead told Mic via email that he finds it humorous.

“I think it’s humorous that people on the left think I have been ‘outed’ for attending a rally that I have been publicly announcing I would be attending for weeks,” Allsup said. “It is disgusting that people would harass people’s families for their political views. People like Matt [Colligan], or @Millennial_Matt on Twitter, and his family has been receiving hundreds of death threats over the past 24 hours.”

However, a harsher grip on the internet’s language choices may not be enough for Chan, who said events like Charlesville are particularly worrisome because the message of hate appears to be coming from the very top of our own political system.

“When there are more people, especially people with power and authority coming out and making statements that certain worldviews are okay, more and more people will come out as a result,” Chan said. “When people see they are a part of the majority they will feel emboldened to act upon their beliefs because they feel like ‘if I do this, others will back me up.’”

Michaelis noted, however, that the internet indeed has the power to heal. But to Michaelis users aren’t wielding that power wisely, especially by naming and shaming white supremacists on social media, otherwise known as “doxxing.” Pages like @YesYoureRacist are actively naming and sharing personal information of ralliers, while journalists like Shaun King are actively participating in hunting down the white supremacists who attacked and bloodied prote Deandre Harris.

However, there are those who argue that by firing racist employees, which is entirely legal in the private sector, companies are helping to control the narrative on supremacy in America. Additionally, big businesses such as Google, GoDaddy and the gaming chat service Discord are making it clear that they will not support a racist customer base. As Mic reported Wednesday the Daily Stormer, one of the internet’s oldest white supremacy sites, has essentially been wiped off the web, thanks to being dropped or banned by social media channels and its server, GoDaddy.

He added that naming ralliers, if done in the spirit of punishment, is “absolutely wrong.” However, done the spirit of reconciliation, by saying “Hey Joe Smith, here’s your picture with your tiki torch. Why don’t you come visit the synagogue and speak to the rabbi about his life?” may be all one kid needs to make a change.

“Bring them in to have a dialog and show them why there is nothing to fear,” he added. Michaelis even wrote an entire blog post outlining all the better ideas to squashing a white supremacist rally than doxxing.

On the internet, Michaelis said, it’s very easy to “surround yourself in an echo chamber where it’s any kind of cockamamie idea, being the white race being oppressed or the Earth is flat or that the moon landing never happened or whatever.”

He added that the people in the white nationalist movement are already putting themselves in an “ideological hellhole” without any doxxing help. But the sooner they realize they are hindering their own ability to be happy, the sooner they can “get out of their bullshit and get on with their lives and realize that happiness is something we can all achieve if we practice kindness, gratitude and forgiveness.”