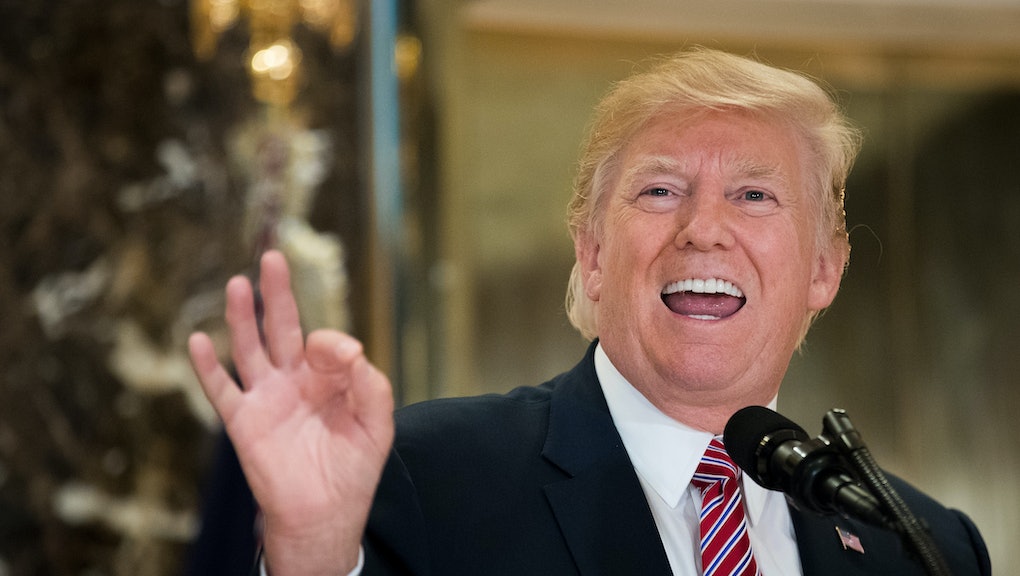 After an attack at the “Unite the Right” rallies in Charlottesville, Virginia, left one dead and more than a dozen injured, Trump condemned the rally’s Ku Klux Klan and neo-Nazi participants. But just a day later, he suggested that some of the Klansmen and Nazis were good people, and that the anti-racist counterprotesters also deserved blame for the chaos.

In several tweets, Trump has fawned over monuments to pro-slavery Confederates — statues that many communities have taken down in the wake of the Charlottesville attack. The president tweeted his compliments Saturday to an estimated 40,000 anti-racist counterprotesters in Boston who peacefully opposed a small-by-comparison “free speech” rally.

But by Sunday, neither Trump nor members of his administration had offered a stronger condemnation of racism than had been offered earlier. The topic was virtually all that hosts and guests on the Sunday political talk shows discussed — and the Trump administration offered up no officials of their own. During a press conference about the war in Afghanistan on Monday, Trump reiterated his condemnation of racism without namechecking the KKK or the so-called alt-right.

“When we open our hearts to patriotism, there is no room for prejudice, no place for bigotry, and no tolerance for hate,” he said.

Some Charlottesville far-right rally participants had already expressed delight that the president had failed to do what others have so easily done — Trump hasn’t stated emphatically that Klansmen, neo-Nazi and white nationalists are not on the “right” or “good” side of anything.

So, how should media talk about Trump, Charlottesville and white supremacy? Is Donald Trump, by words and deeds, the apologist in chief for white racists? Or is he toeing the line to preserve his political base? If it’s the latter, should journalists accept that or change the way they cover Trump altogether?

“For journalists, the impulse to cover things from both sides is deeply ingrained,” Jim Naureckas, website editor for national media watch group Fairness and Accuracy In Reporting, said in a phone interview. “When you have presidents talking about many fine people in a white supremacist march, and protesters are being run down in the streets, that both sides narrative is really problematic.”

Some media ethicists say journalists should start by agreeing that Trump, over and over again, has proven he is an unreliable narrator of current events. Several outlets have publicly debated Trump’s on-again-off-again relationship to truth, very early in his presidency. CNN, the New York Times and the Wall Street Journal decided they would start saying that Trump “lies” when it’s clear that he has done so.

On Aug. 15, during a press conference at Trump Tower in New York City, the president said the crowd of mostly young white men who marched through the University of Virginia in Charlottesville while carrying lit torches were “people protesting very quietly the taking down of the statue of Robert E. Lee.”

That’s a lie. The torch-carriers yelled racist and anti-Semitic slurs as they walked through campus — and they later swung their lit torches and pepper-sprayed UVA students and counterprotesters.

Trump’s performance around Charlottesville and racism represents a departure from what is almost universally considered normal, moral leadership from United States presidents. That’s the basis on which journalists can point out how extreme the president’s behavior is, New York University journalism professor Jay Rosen said.

“There’s also the fact that both Democrats and Republicans have agreed: You don’t give aid and comfort to white supremacists and people who sympathize with the KKK,” Rosen said in a phone interview. “Anybody who knows our history, and what a dark history that is, understands that.”

“Journalists are entirely right to point this out,” Rosen added. “That’s not editorializing. That’s describing what [Trump] did.”

Journalists inadvertently allow the principles of accuracy and fairness to be gamed when they accept Trump’s flawed claims about Charlottesville and racism, media ethicists say. Reporters who evaluate the “many sides” of an issue, and don’t arrive at an earnest conclusion, aren’t getting their readers and viewers closer to the truth.

That means journalists need to call it like it is. It’s now fair and accurate — and these days, it’s urgent — to describe Trump as an apologist for racists.

Couching it in softer terms would be a whitewash — and inaccurate.