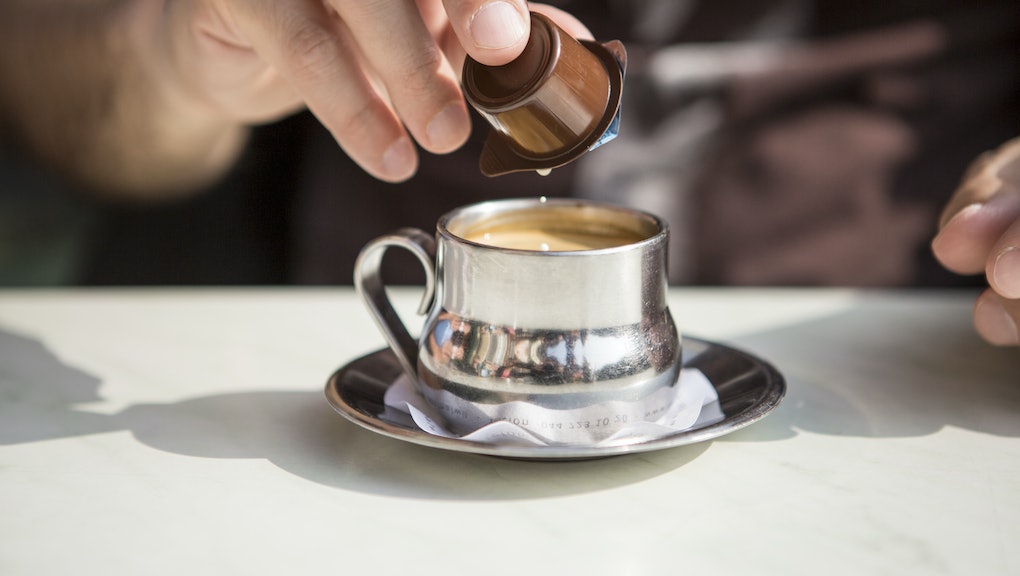 Tiny, to-go coffee creamer cups do make our morning routine more convenient. But they also add to the rampant throwaway plastic problem in the U.S., which amounts to about 33.6 million tons of plastic waste every year.

Now, scientists are trying to offset some of the damage with a new invention: milk and creamer capsules that can be dropped directly into a hot cup of coffee without a plastic container.

The capsules are made with a crystalline, sugary layer that keeps the milk sealed inside at room temperature. Once added to your drink, the capsule dissolves and unleashes the douse of milky sweetness. For the sake of accommodating our palettes, scientists even went so far as to make two versions: Sucrose capsules were designed for a “high level of sweetness,” while erythritol capsules are for those of us with less of a sweet tooth. They’re still working on a version that doesn’t make our coffee or tea any sweeter, and the milk is good for up at least three weeks once sealed.

“The capsules could replace the small, extremely unpractical coffee creamer packaging that is used in great quantities at conferences or on airplanes,” Joachim Ulrich, a professor of engineering at Martin Luther University Halle-Wittenberg in Germany, said in a release.

Tiny pods similar to those that hold coffee creamer have already been a point of concern for several years now. Keurig cups are another example of small capsules that end up in our trash cans, and yet John Sylvan — the man who helped bring the convenience of Keurig cups into our world — told the Atlantic that he regrets ever creating them. Former Nespresso CEO Jean-Paul Gaillard also criticized aluminum Nespresso pods, stating that “people shouldn’t sacrifice the environment for convenience.”

Though these new sugary milk capsules may not be able to hold the weight of coffee grounds, they’re certainly a step forward for reducing the carbon footprint of our morning coffee.