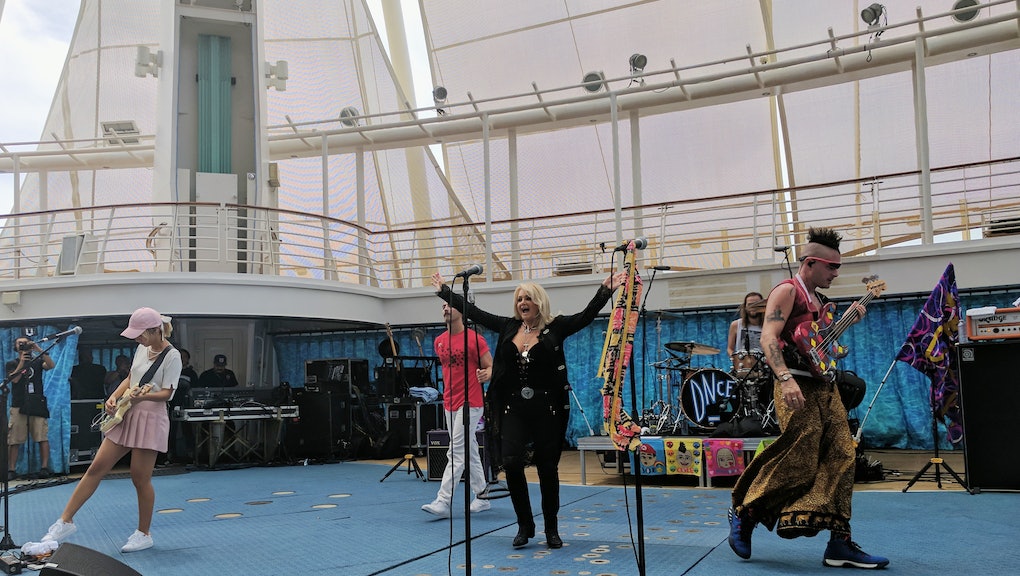 It can be nearly impossible to find a moment of peace on a cruise ship. Unless you’re holed up in your room or blissfully lost in a massage, from the moment you step on board, you’re surrounded by people and the sounds of vacation — yelling, whooping, crying and cheering.

Royal Caribbean’s Oasis of the Seas, one of the biggest cruise ships in the world, was no different on Aug. 20, as it set sail from Port Canaveral, Florida — Mic attended as a guest to cover the eclipse. The excitement was palpable — within 24 hours, the 6,270 passengers on board would witness the total solar eclipse, as well as a highly anticipated performance from DNCE and Bonnie Tyler. And on this ship, unlike most, there would be a rare moment of introspection and silence.

It wasn’t easy to pull together the most epic party ever to happen to the Atlantic ocean. Eleven months ago, Jim Berra, the chief marketing officer of Royal Caribbean, sat in a meeting with his creative agency, Weber Shandwick. The pitch: What if the only place you could see Bonnie Tyler singing “Total Eclipse of the Heart” during the total solar eclipse was onboard a Royal Caribbean ship?

First, they laughed. Then, they debated: Was Tyler still relevant? Yes, the agency argued. Her song is a karaoke classic, one that people of all age groups still love. The nostalgia factor won out in the end.

Of course, nothing is quite as easy as it sounds. “We have multiple ships in the region, but Oasis was in the most prime spot on Monday for the eclipse,” Berra said. “We did a little bit of work to deviate and change the port times, in order to be in the optimal location.” It’s the first time in history that the company has changed an itinerary for a celestial event, and it all had to be timed so that the ship hit the path of totality at the right time

Then there was the all-important matter of securing Bonnie Tyler. After all, what is an eclipse party without a live performance of the epic eclipse-themed song? Tyler was on tour in Beirut, but miraculously didn’t have a performance scheduled for Aug. 21, so the company flew her in for the big day. Since the song is a duet, they needed a partner — ideally someone who could broaden the appeal of the event for younger cruisers. DNCE, the band fronted by Joe Jonas, was up for the task, having performed on previous Royal Caribbean ships. “Bonnie and DNCE together — it’s as wide a music appeal as you can find on the planet,” Berra said. “People are going to be blown away.”

As soon as the talent was confirmed, it was time to share the news. This itinerary had already been available for purchase for more than a year — Berra estimates that it was 75% sold when they announced the special itinerary in June — so those who had booked early were in for a lucky surprise when it was announced that the Oasis would be on a eclipse-themed sailing, with a performance by DNCE. “We didn’t see any cancellations,” Berra said.

As the big day approached, there was still work to be done. A 2 a.m. weather report on the day of the eclipse helped Captain Per Kristofferson and chief meteorologist James Van Fleet, who monitored weather patterns and prayed for a cloudless sky. Other Royal Caribbean cruises sailing on Monday got a partial view of the eclipse, but Oasis would be the only one seeing totality.

Around noon Eastern, the captain’s voice rang out on the P.A. system, informing passengers that the ship was getting close to the prime eclipse location. “We’ve never gone this way,” he said. “We usually go further south to the Caribbean.” Cruisers started flocking out of their rooms and into the outdoor theater, balconies, and other viewing spots for the big performance. Nick Weir, who oversees entertainment for the cruise company, introduced the show: “We’ve timed it so that as the moon touches the face of the sun, so effectively beginning the eclipse, she’s going to be singing her incredible world famous song, “Total Eclipse of the Heart.” DNCE performed an energetic set of their top hits, including “Cake by the Ocean,” “Naked” and “Toothbrush,” with a few nostalgic covers in the mix — TLC’s “No Scrubs,” Spice Girls’ “Wannabe” and Britney Spears’ “Oops, I Did It Again.” When Tyler came out, the crowd rose to their feet, singing along openly to her iconic track.

As the concert ended, the crowds flooded up toward the uppermost decks, clamoring for the best view, grabbing a last-minute cocktail and pointing cameras and smartphones up at the sky. The wind had picked up by then, adding to the hectic atmosphere. There were excited shouts as people glanced through the special eclipse glasses, watching the orange-red crescent of the sun get smaller and smaller as the moon slid directly over its face.

Then, a few minutes past 3:00 p.m., we hit totality — darkness outside, high winds, a perfect view of the moon covering the sun, with a ring of light peeking out. For a quick moment, an eerie calm settled over the crowd as everyone turned their attention skyward. There were a few seconds of silence, then the whoops and cheers started back up, as the significance of the moment set in.

The darkness left as quickly as it came, as did the noise level. There was more cheering and whooping from the crowd, then all hell broke loose as Joe Jonas was spotted on the deck. The crowd dissipated before the partial eclipse was over: the crew back to work, the passengers back to their poolside drinks. The big event might be over, but the rest of the cruise — and the most epic vacation ever — was only just starting.