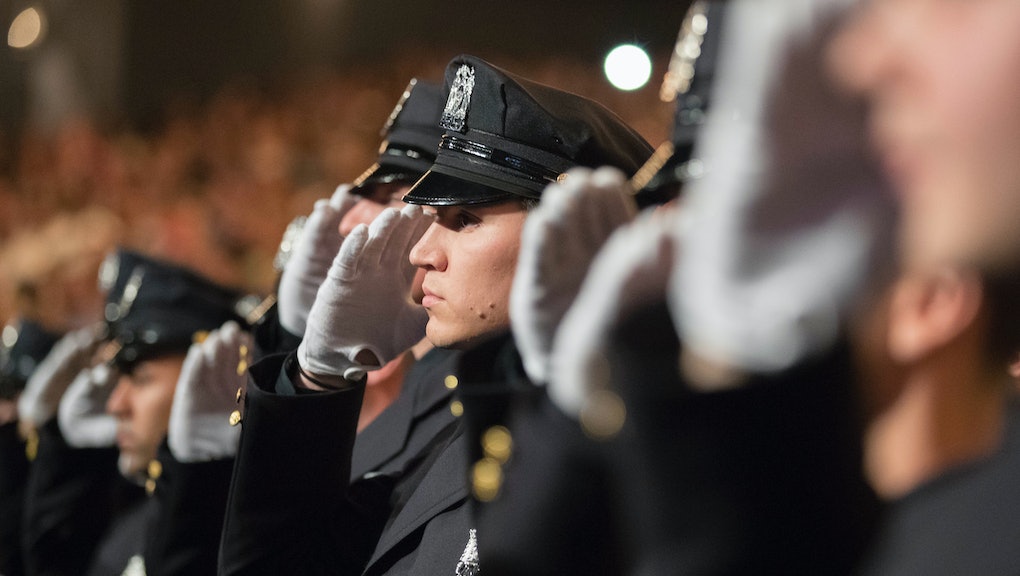 On Sunday, a New York City police union published a video to YouTube claiming that police officers around the nation are at risk of a new kind of racism: Blue racism.

“The average person doesn’t see those things that make me human,” the voice over explains as the nearly four-minute video pans from officer to officer. “They don’t even label me based on being African American, Latino, Asian, Caucasian and so on. They tend to see an even broader stereotype through an even more racist lens. When they look at me, they see blue.”

The video’s narration goes on to say, “Because I am blue, I am increasingly vilified.” It then added a quote, which is a misquote, by Martin Luther King Jr., which reads, “I have a dream that one day my four little children will one day live in a nation where they will not be judged by their color, but by the content of their character.” In reality, King never simply said “their color,” but rather, “the color of their skin.”

Immediately after the video went up, people took to social media to express their distaste for the clip and the union’s belief that police officers are their own race.

On Monday, Edward D. Mullins, the union’s president, told the New York Times that the response had been “somewhat mixed.”

“From the law-enforcement perspective, everyone understands the message — the message being, we’ve been pretty much under attack,” Mullins said. He further acknowledged that using the word “racism” was perhaps a bad move.

“I guess we could have not used the word ‘racism,’ but something like ‘bias,’’’ he said.

And while police officers have without question been singled out and maliciously killed in both planned and random attacks, police distrust or “bias” stems not from race, but from the growing statistics that show police have their own biases against true racial minority communities. As HuffPost noted, a study from 2016 Stanford University analyzed traffic stops in 100 North Carolina cities and found that police had a “lower threshold of suspicion” for black and Latino drivers. The officers were also more likely to search vehicles of those same minorities.

Mullins told the Times that the video was simply in response to the country’s increasingly violent “protests and battles.” He noted that the purpose of the video was to bring people together for a conversation adding, “We’re not the bad guys.”