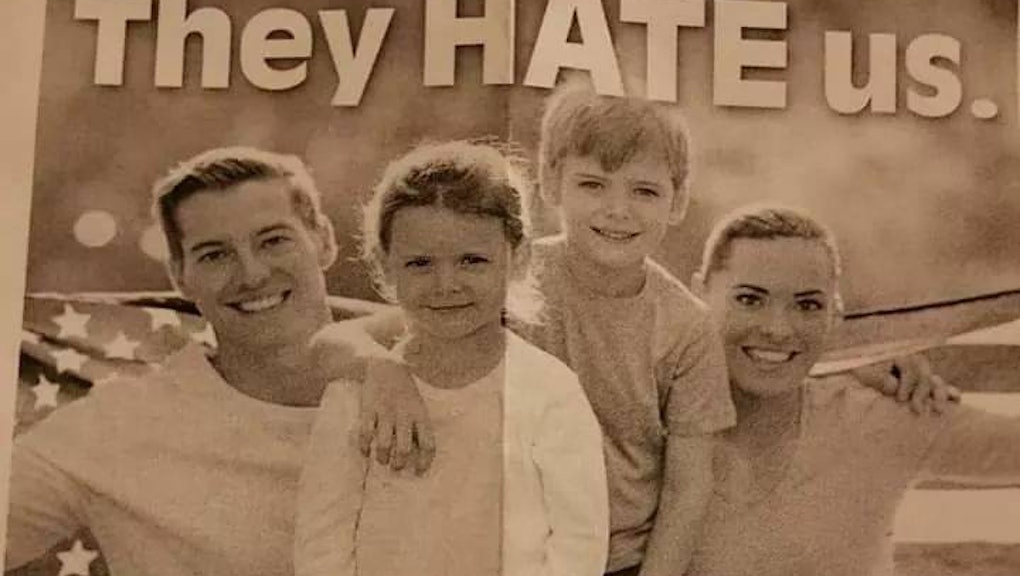 Retired rabbi Henry Karp started seeing flyers that warned of “genocide” and “extinction” popping up in his adopted hometown of Davenport, Iowa, about a month ago.

The monochrome paper leaflets displayed innocuous stock images of smiling families and adolescent white boys and girls strolling through tranquil fields. Ominous, bold-font warnings, like “THEY HATE US” and “MISSING: A future for white children,” were etched at the top and bottom of the pages.

“On Aug. 7, I got a call from a parishioner informing me one of his congregants had received those flyers on a car in his parking lot,” Karp said in a phone interview Wednesday. “Then we had gotten other reports of those same flyers being distributed in the community.”

Since the election of President Donald Trump, there have been several instances where white supremacist propaganda has been publicly circulated in local communities and on college campuses. But the name of the organization allegedly posting these flyers on utility poles and local business windows in the Quad Cities region of Western Illinois and Eastern Iowa raised the hairs on the rabbi’s neck: The flyers were, reportedly, the work of the National Alliance.

What is the National Alliance?

The National Alliance was once considered the “most dangerous” and well-organized neo-Nazi group in the U.S. The organization’s heyday was in the mid-to-late 1990s. It hasn’t maintained a public presence for years, according to Southern Poverty Law Center senior writer Ryan Lenz.

“It’s very bizarre,” Lenz said after seeing the NA’s recent flyers for the first time. “If this is authentic, it’s very interesting.”

White supremacist author William Pierce, the man the SPLC called the most important neo-Nazi of the 30 years preceding his death in 2002, founded the NA in 1974.

Following his death, Pierce’s group floundered without his guidance. Infighting among NA members about which direction to take the organization led to its downfall, according to Lenz.

”Last year, the National Alliance saw various efforts from members to wrest control of the group and bring it back,” Lenz said. “That effort is still kind of stymied and slow, but it is underway, most definitely.”

A history of violence

At least 14 other violent crimes — including attempted bombings and racially motivated beatings — committed between 1984 and 2005 have been linked to the National Alliance, according to the SPLC.

In December 2011, NA member Kevin William Harpham of Colville, Washington, was sentenced to 32 years in prison for planting an improvised explosive device inside a backpack along the route of a scheduled Martin Luther King Jr. Day Unity March in Spokane, Washington, roughly a year prior. In 1998, Florida man Todd Vanbiber was one of four NA white nationalists arrested and charged in connection with a plan to plant 14 pipe bombs near Disney World.

The NA today is a mere shell of its former self, but its estimated 50 or so members nationwide may be trying to capitalize on the Trump-fueled popularity of white nationalist ideology to regrow their ranks, according to Marilyn Mayo, senior research fellow for the ADL’s Center on Extremism.

“Flyers are always disturbing when they show up in a community,” Mayo said, “but in terms of the group itself, it really hasn’t been very active. It has very few members and they’re not very well-organized at this point. I think they’re showing up because there’s probably a person in the area who wants to get attention for the group.”

Progressive activists in the Quad Cities region have hosted two anti-hate rallies since the NA flyers started circulating. The second rally, which took place at Schwiebert Riverfront Park in Rock Island, Illinois, on Sunday, was organized after the violence in Charlottesville, Virginia, on Aug. 12 left counterprotester Heather Heyer dead.

“Nearly [1,000] people showed up [to Wednesday’s rally],” organizer Hai Duong, president of the Quad Cities Queer Committee, said in an interview Wednesday. “The events in Charlottesville definitely resonated with the community. They knew this is happening in more than one place in the world.”

Karp remembers when neo-Nazis first took root in the Quad Cities during the early 1990s. They were accused of burning crosses in black neighborhoods and threatened to kill Karp and his fellow Jewish congregants back when the recession-fueled Farm Crisis of the 1980s had many angry regional farmers facing financial ruin. The neo-Nazi skinheads, according to Karp, fueled many farm workers’ anger with conspiracy theories about Jewish bankers supposedly being the cause of their financial misfortune.

“I got one letter that said we’re going to kill you, your wife, your children and your dog,” Karp said.

However, the neo-Nazis eventually went away after the community made it clear their hate was not welcome.

“They couldn’t express themselves visibly,” Karp said. “One day they were leaders of this movement. The next day they were in tears because they were rejected by society.”

Sept. 18, 2017, 11:07 a.m.: After this article was published, Hai Duong reached out to provide updated attendance numbers for the Wednesday rally, which 1,000 people attended. Quad Cities Queer Committee does not have an accurate attendance estimate for the Sunday rally, which Duong previously stated was 2,000. This article has been updated accordingly.