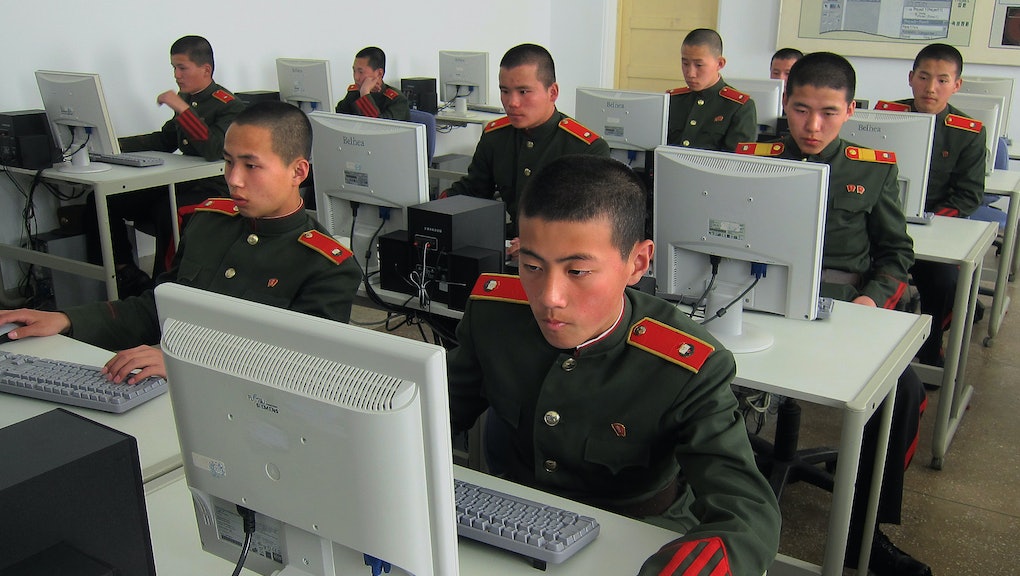 The country often called the “hermit kingdom” is looking more wired than ever. North Korea is one of the most socially controlled countries in the world — a place where simple freedoms are restricted by a propaganda-fueled regime that deifies supreme leader Kim Jong Un, and where information smugglers risk torture to bring USB drives loaded with shows like Desperate Housewives to the black market.

These days, wealthy and elite North Koreans can buy tablets, make calls on cell phones using the country’s mobile network and even look up cooking recipes from the nation’s increasingly sophisticated intranet. But this doesn’t necessarily mean that North Korea is transitioning into a freer society. On the contrary, the Kim regime might have more ways to monitor and control citizens than ever before.

Here’s what we know.

The DPRK occupies an incredibly small space on the World Wide Web that most Americans are familiar with. There are a few dozen North Korean internet sites we know about, and they offer little functionality beyond reading about various government bodies and services.

“These internet sites are all for foreign consumption. That’s why it’s all sort of propaganda,” Martyn Williams, a contributor for 38 North and the journalist behind a blog called North Korea Tech, said by phone. “It makes North Korea look like a normal country because different parts of their government have their own website and that sort of thing, but it’s all just a PR ploy.”

The websites look a bit like they’re stuck in the 1990s, with old-school navigation bars, one-dimensional graphics and tiny clip-art icons next to section headings. One cultural exchange-focused site, the Korean Friendship Association, had an “electric library” of downloadable PDFs for free. It included Korean language poems worshipping Kim Jong Un and a largely flattering, 104-page English language ebook on North Korea by a writer from Bangladesh.

“It makes North Korea look like a normal country — but it’s all just a PR ploy.” — Martyn Williams

Some copies or iterations of North Korean sites also exist on the nation’s intranet, an internal network of servers that’s kind of like a company’s employee-only virtual private network.

The DPRK calls its intranet “Kwangmyong” (“bright”), and it could have as many as 5,500 websites. Kwangmyong is typically accessed in universities, libraries or other institutional buildings — a privilege mostly concentrated in cities like Pyongyang, the nation’s capital, which looks nothing like the rest of North Korea’s vast, impoverished countryside. A 2014 article in Fast Company estimated that just 10% of the population has ever accessed Kwangmyong.

Just 10% of the population has ever accessed Kwangmyong, Fast Company estimated.

On Kwangmyong, users can log on to video lectures, check their email and read the latest state-sponsored news. But there’s certainly no developed form of social media or high-powered search engine like Google.

“In a way, it’s more like when I started using the internet back in the mid-’90s before it got commercial,” Williams said. “NASA had a huge presence on there and a lot of it was more for education and research.”

Few foreigners have ever seen North Korea’s intranet. In 2015, photographer Aram Pan snapped a photo of a retro-style poster listing some intranet site addresses inside a library located in Rason, a northeastern city in the DPRK. It shows visuals of what North Korean intranet sites might look like.

Most of what the outside world thinks it knows about the intranet comes from tiny bits of evidence like Pan’s photos, in addition to defector interviews and North Korea’s state-run media outlets.

From these various streams of information, it appears the Kim regime wants to give the impression that it’s like any other country — at least to the outside world.

“People believe North Koreans are isolated and that they make sometimes crazy or irrational decisions,” Priscilla Moriuchi, director of strategic development at Recorded Future and the author of its report, said by phone. “These seniormost leaders are consuming global media. … We see them on Facebook, on Instagram and Chinese-equivalent social networking sites.”

While the poor lack basic necessities, the well-off may be playing games online

Truthfully, we don’t know how many North Koreans actually know what it’s like to see the full, unfettered internet. Some senior-level college students have internet access in a tightly monitored computer lab, according to North Korea Tech. But sometimes, internet use might be for show: Former Google executive chairman Eric Schmidt once visited Kim Il Sung University with his daughter, Sophie, who noted that students “may as well have been figurines” while looking at pages of Google. “No one was actually doing anything. A few scrolled or clicked, but the rest just stared,” she wrote.

“There are too many North Koreans who still don’t have electricity and are living in rural [areas], and lots of them probably have just basic literacy,” Williams said.

At maximum, a “few dozen families” who might access the full internet at work or at home — or the “0.1 %,” as Moriuchi called them — live a life of online leisure. According to the Recorded Future report, gaming and content streaming made up about 65% of all internet activity used among this elite class. World of Tanks was the big hit, and it’s exactly what it sounds like: a bunch of military-grade machines blasting opponents on rough terrains.

Other elite users bought expensive sneakers online or read beauty and health websites. They checked their Facebooks, MSN and Gmail accounts, too.

It’s worth noting that the Recorded Future report has been met with some speculation. It doesn’t share a sample size, nor does it explicitly say how it filtered out internet use from foreign visitors in North Korea (Moriuchi assures that they have, for the most part). A member at Team Cymru, an internet security research organization that teamed up with Recorded Future for the report, told Mic that it’s typical in the IT security business for all parties to sign non-disclosure agreements on such details.

“The devil is in those mythological details,” Nat Kretchun, a researcher and author of a report on North Korean tech, said. “If there is some potential that it’s a mix of the people they say they are and foreigners or others, then the findings get a lot muddier.”

If North Korea’s government can’t control the wired world from reaching its citizens, it may at least construct its own insular technological universe. In the future, that could mean expanding Kwangmyong to satiate an appetite for a more modern life.

“I think there’s a possibility of more access [to the intranet] in the future,” Kretchun said. “I think that the North Koreans have probably decided that their experiment with cell phones is a success, and that essentially putting people on networked devices gives them more control, censorship and surveillance options without giving up that much.”

In 2015, for examle, the North Korean government announced an internet shopping site called Okryu, which appears to sell things like makeup, medicine, shoes and packaged foods as of 2015. Only the elite in Pyongyang are thought to have access to it. “And you have to pay with an electric card, which again is an excellent way [for the government] to look at what people buy,” Williams said.

“Putting people on networked devices gives them more control, censorship and surveillance options without giving up that much.”

Over the last three or so years, North Korea’s mobile network is thought to have been automatically updating phone operating systems with new surveillance and censorship features. Software prevents foreign media files from being opened and periodically saves random screenshots of what users are doing in a permanent, irremovable album. Now, there are a few signs that the government might be interested in expanding connectivity from institutional buildings into elites’ homes.

One sign is the tablets boasting connectivity to Kwangmyong, which have shown up in the North Korean market in recent years. The other is a TV box called Manbang which allows users to access any North Korean program that aired within the last few days on-demand (think Netflix, but with more propaganda).

“This shows two things: Because of the greater access to information overseas on DVDs and USBs and things, North Koreans have seen the progress in South Korea when they watch dramas and they’re starting to demand it themselves,” Kretchun said. “The other thing to remember is that anytime anything goes digital, it makes [people] easier to monitor and track.”

“Anytime anything goes digital, it makes [people] easier to monitor and track.”

As the DPRK’s intercontinental ballistic missiles and nuclear weapons continue to advance, so do the regime’s efforts to digitize and grow in the cyberwarfare arena.

On one hand, elite North Koreans are getting a taste of what it’s like to live in the outside world. But on the other hand, as North Korea’s own rendition of modern life flourishes, they may be more closed off than ever.