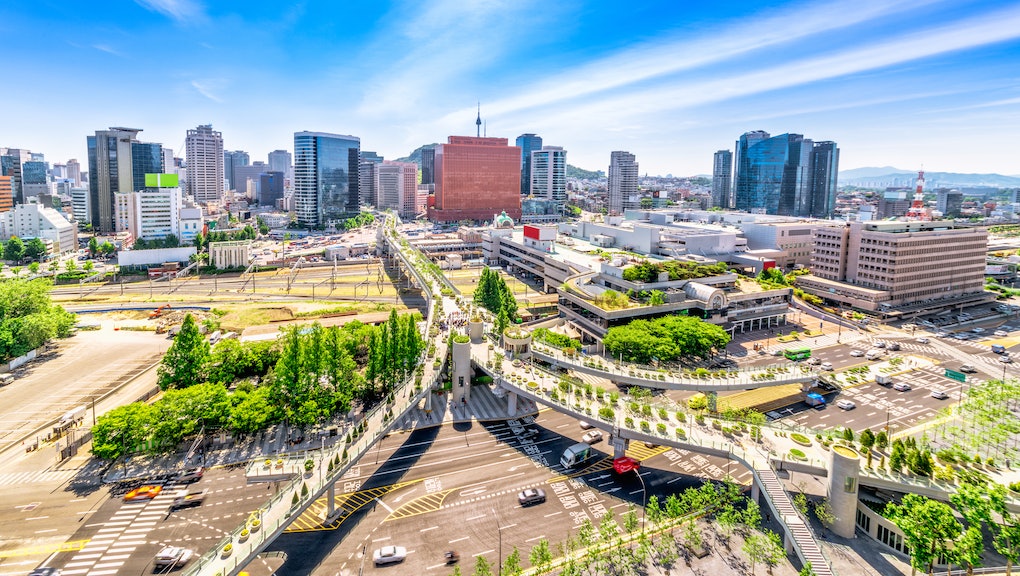 How one mobile app is shaping democracy in South Korea

Seoul, South Korea, is home to one of the most electronically wired and politically active populations in the world.

Nearly 78% of all voting-age South Koreans cast ballots in the country’s most recent presidential election, according to the Pew Research Center, compared to the roughly 56% of Americans who voted in the 2016 race.

The country’s political rigor — combined with the world’s fastest internet connection and highest rate of smartphone ownership — seemed like the perfect recipe for citizen engagement. So around 2013, Seoul created an app called mVoting, which lets citizens submit and vote on local policy proposals.

Imagine getting your two cents in on local issues by voting in an app that wants to hear your thoughts on the city’s public parks, bus routes and designated smoking areas. That’s exactly what mVoting does.

Better yet, it’s effective: At least 181 proposals have turned into actual Seoul City policies. “It’s fairly unique around the world that a city would go through these efforts to really look at how services are delivered and ask for citizen feedback,” Marc Holzer, distinguished professor of public administration at Suffolk University’s Institute for Public Service, said in a phone interview with Mic. “Think about all the policy proposals put out there that are actually implemented as a result of this app.”

MVoting, which has been downloaded at least 100,000 times on Google Play alone, allows users to browse through local policy proposals based on geographical relevance or popularity. Some of the most recent issues in mVoting included the walkability of parts of Seoul; what public libraries can do to improve themselves; and which lessons should be taught in after-school programs.

“Citizens can participate [in] contemporary policy issues, such as bus routes, restrictions on driving when there’s a lot of air pollution or designating nonsmoking areas in parks,” Holzer said. “It really is a way for citizens to express their opinions on the services they’re most in contact with, or that most affect them and their family.”

Votes on mVoting aren’t included in “real” elections. The app is primarily for residents to give feedback to city government on matters of all kinds, whether trivial or serious. For example, one of the app’s “hot issues” let users weigh in on whether South Korea should legalize gay marriage; some participants further debated the issue in the comments section pictured below.

In other polls, citizens were asked about their knowledge of property tax policies and what the local animal welfare center should be named. As of June 2016, more than 1.1 million users had voted in the app, according to Seoul Solution, and at least 4,400 proposals and voting agendas have been posted — 88% of which came from citizens.

“It’s not an official voting process, but it’s substantial advice — particularly to the bureaucracy,” Holzer said. “They can shape the elected leaders and tell them what is likely to make a real difference out there.”

Perhaps the U.S. should take note.

Seoul’s government is a pro at using the internet

Though it’s widely known North Korea’s authoritarian government commits terrible human rights abuses and uses technology to spy on its citizens, it might come as a surprise to some that South Korea previously struggled with similar issues.

The country’s first democratically elected civilian president, Kim Young-sam, came to power just 24 years ago in 1993. Until then, the nation was run by a number of military dictatorships, which brought periods of extreme media censorship and government-sponsored murder of political dissenters.

Fast-forward to today, and South Korea’s democracy arguably looks stronger than ever, especially from a technological standpoint.

“I think Korea’s government is a real success story, probably the best success story in the world,” Holzer said. “It’s dramatically different than it was in the 1960s, and it’s continuously moving in the right direction — I think faster than any other country.”

From 2003 to 2016, a series of reports from Rutgers University’s E-Governance Institute has ranked the best cities in the world for digital governance — in other words, how well cities use tech to provide and communicate government services and “involve citizens [in] decision-making,” said Aroon Manoharan, associate professor at the McCormack Graduate School of Policy and Global Studies at University of Massachusetts, Boston.

The report’s score is based on five categories: privacy and security, usability, content, services, and citizen and social engagement. Seoul has ranked No. 1 overall in every report. Meanwhile, New York City fell from fourth place in 2003 to seventh place in 2016.

“It is exceptional, the e-government implementation and e-government initiatives that are going on in there. A lot of these things are so unique to Seoul,” Manoharan said in a phone interview with Mic. “The administration there had the foresight on the role of technology and how it’s going to impact everyone’s lives, and [it] actually initiated some of the earliest e-government policies in the 1990s. All of these initiatives are things other countries [were] doing in the 2000s.”

For the average Seoulite, everyday government services are available online. One government website, for example, allows citizens to authenticate their identities and then look up and print their own vital records. Foreigners can apply for visas or make immigration appointments online.

Security and privacy on mVoting are not general concerns. The mVoting app requires a phone number, username and password, according to Seoul Solution; developers took care to encrypt the passwords and design the app so that phone numbers themselves are not stored in a way that allows city government to identify individual users and how they voted.

Could a system like mVoting ever work in the U.S.?

American cities would seriously benefit from increased citizen engagement — and Holzer says that implementing an app similar to mVoting wouldn’t be all that hard.

“New York City basically doesn’t have the mechanisms or the trust in the citizens that Seoul does,” Holzer said. “They aren’t as sophisticated in digital infrastructure to reach citizens. ... They’re really light-years behind Seoul.”

In a way, Seoul stands out for its simplicity. The mVoting app is accessible to anyone who can confirm their identity with a Korean phone number. It’s essentially a forum for citizens to talk about city problems and their solutions — in a place where policymakers can easily access their feedback.

“By having an app like [this], you would actually be reaching out to a lot of these people who are being totally neglected in the U.S.,” Holzer said. “At the end of the day, this is not very expensive to implement. ... The cost isn’t very high and the benefits would be great. It’s just, internally, the government needs to be willing to plan this and also open themselves up to a sudden flood of requests from citizens.”