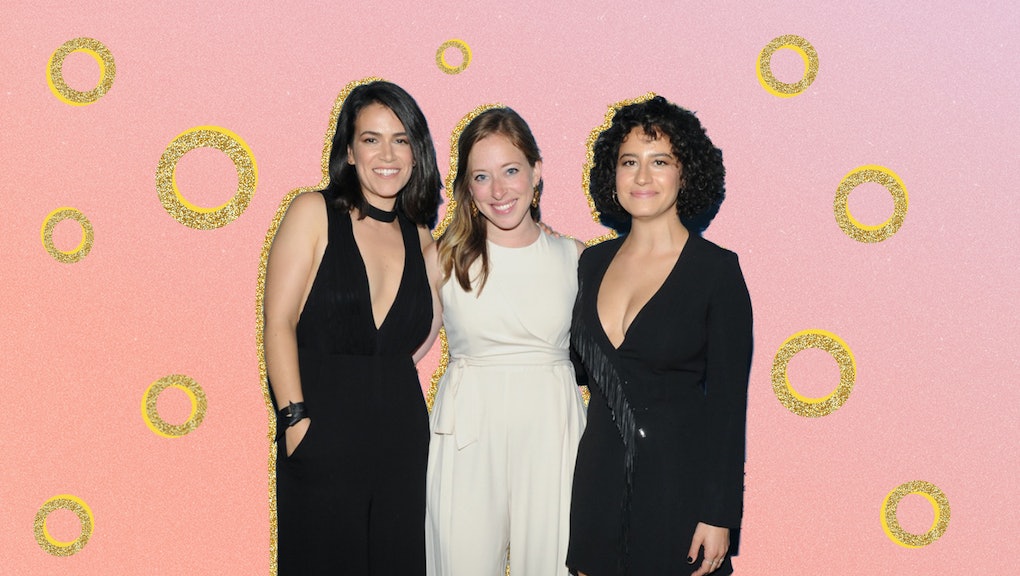 When the fourth season of Broad City premieres on Wednesday on Comedy Central, it’ll be roughly one and a half years since we last saw Ilana and Abbi. The last time we saw them, they were on their way to birthright in Israel. Looking back, it’s a bit emotional. How innocent they were — and we were— back in April 2016.

Over these past 17 months, Ilana and Abbi, much like us, have been through quite a bit. The election cycle. The subsequent election of Tr*mp, who’s name will gleefully be bleeped this season. There was the Women’s March and the immigration ban. Every few days, a new fresh hell for Americans to grapple with.

And according to Staci Greenbaum, Broad City’s costume designer who’s been with the show since the very first season in 2014, Abbi and Ilana’s Season 4 style will reflect that. “We had a really nice opportunity to be a platform for our current social and political climate,” Greenbaum said in an interview with Mic. “It’s obviously loudest on Ilana. I think it was a really cathartic process.”

Greenbaum says that we’ll be seeing some political T-shirts from Otherwild, the brand that created those “The Future is Female” “Gender is a Drag” shirts, and Wildfang, who have shirts that read things like “Wild Feminist” and “Slay the Patriarchy,” with an image of Beyoncé. Ilana also makes an appearance in the iconic “pussy cat hat” from the Women’s March.

At the time being, wearing these political garments is all too relatable, and that fits nicely with Broad City’s reputation for Ilana and Abbi dressing like, well, the rest of us.

“I try to be really honest about the socioeconomic class they stand in,” Greenbaum said. “There’s a little creativity in accumulating clothing, especially for Ilana, and where she finds these wild things. We try to think: If you were looking to go out on a Friday, where would you go? And it’s Zara and H&M, and so I try to keep it really honest in that way. But we also want to keep it a little original, through thrifting and sourcing, and I really love using New York-based designers for certain things.”

As she reads through a script, Greenbaum’s wheels start to turn. She and her department scour things like street style blogs, Instagram and Brooklyn-based markets, where she looks for local designers. This season, we do get arcs in terms of what each woman will wear throughout the show. As Greenbaum revealed, both Abbi and Ilana get new gigs, with Abbi getting a job in a graphic design firm and Ilana, after getting fired from Deals Deals Deals last season, landing a job at a trendy restaurant.

“For Abbi, we’re exploring her artistic side, and maybe a more feminine side than we’ve seen her in the past,” Greenbaum said. “I really like where we’ve taken her style this season and it’s really playful and feminine in a way we haven’t done. It’s still kind of youthful, like she wears this really fantastic dress from Reformation, that’s a great rusty orange color with a gold floral print.”

“For Ilana, she’s still Ilana, so part of what we were influenced by is the impossibility of winter in New York, like putting on a million layers and then going in the subway and getting super hot,” Greenbaum continued. “That’s funny because she loves wearing not a lot of clothing. And in the beginning, she’s not really making any money, and then when she does have income, she kind of goes wild.”

There’s often a lot of comedy in what these lead characters wear, and the clothes can become actual characters themselves. Think Abbi’s infamous blue bandage dress, which Greenbaum says is from a website called HotMiamiStyles.com and will be making another appearance this season.

Then there’s Ilana’s dog hoodie from American Apparel and lattice bra, which Greenbaum says is from the store LF.

As writers on the show, Ilana and Abbi often bring their own personal experiences into the show too, and according to Greenbaum, we can expect that this season Ilana will pay tribute to a time in her life when she thought wearing sheer bodysuits from sex shops was super edgy and cool.

There are plenty of other characters Greenbaum has to dress this season as well, a few of them rather remarkable, like Fran Drescher from The Nanny. Drescher will be playing Ilana’s aunt this season, and for Greenbaum, costuming her was one of the greatest moments of her career.

“That experience was amazing for me, on a couple of levels,” Greenbaum said. “Fran’s style, especially from The Nanny, has been a huge icon in Ilana’s own fashion on the show. In high school, with the costume designer I used to intern for, we would eat lunch and then watch The Nanny. Every day. I was, for lack of a better word, a pig in shit. She was a delight.”

Greenbaum also got to style RuPaul, who plays Ilana’s manager at the restaurant. “Ru was, whatever you think he is, he is that and more,” Greenbaum said. “Just really wonderful, supportive, artistic, a very kind soul.”

As for perhaps Broad City’s most iconic guest star — Hillary Clinton in season three — Greenbaum says she didn’t have to style her. “We were in touch with her people and all I wanted was any one of her colorful pantsuits and that was my only instruction,” Greenbaum said. “She came and she looked, as always, perfect.”

As each character’s fashion sense matures and evolves this season, expect a whole lot of relatable moments, some painful political memories and, as always, the totally unexpected.