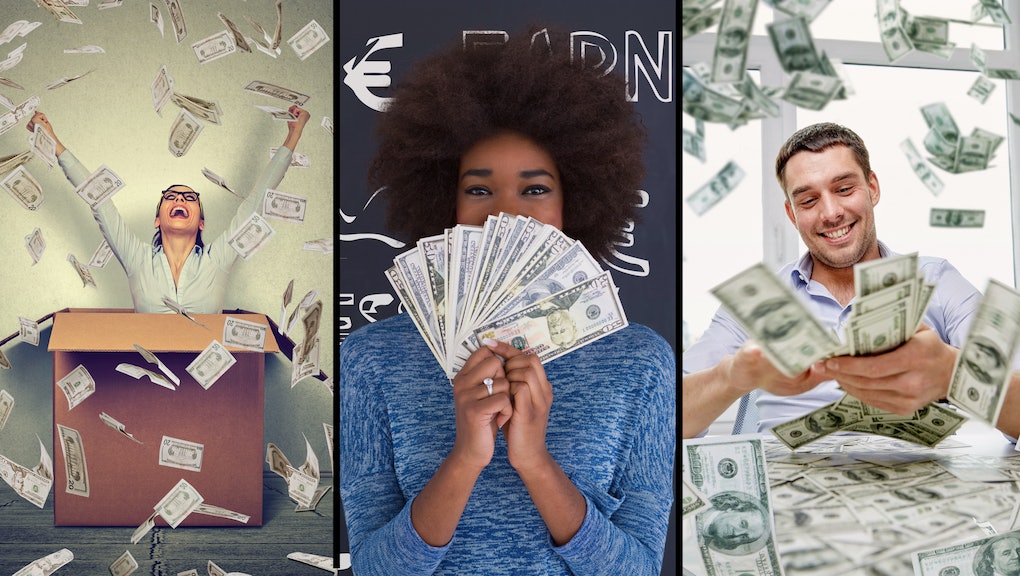 How do you become a millionaire? Here are 7 ways to end up with $1 million.

Becoming a millionaire might seem like a pipe dream, but it’s certainly not impossible. At the end of 2016, there were actually 10.8 million millionaires in the United States — and that number only keeps growing. Sure, some rich folks inherited their wealth, but there are plenty of self-made millionaires, too.

How do they do it? Some start a business while others carefully save a chunk of their income every month. Most live below their means by keeping housing expenses low, driving used cars and always looking for ways to cut costs on everything from food to fun.

After all, building wealth is about more than any one single trick. But if you’re looking for your best way to reach $1 million, we’ve got some creative ideas for you. With a little dedication, you have multiple paths to becoming a millionaire.

Here are seven ways to do it — for real.

1. Turn your passion into a paying gig

Like your 9-to-5 job but have a genuine passion for something else? Instead of pursuing your hobby for fun, make real cash from it. Grant Sabatier, founder of the Millennial Money blog, gave Mic an example of a college student who turned his love of dogs into a business that brings in $200,000 a year.

“I met Adam a few years ago and at the time he was in college studying graphic design, but [he] really loved dogs and worked part-time as a dog walker,” Sabatier said. “He was paying his way through school and making about $15 to $20 an hour depending on the walk.”

Word spread about Adam’s dog-walking business, and eventually he could barely manage the demand — so he took on employees. “After a few years, Adam was bringing in about $200,000 a year in income,” Sabatier said.

If an entrepreneur like Adam continued on this path, and hypothetically invested half of their salary in a savings vehicle earning 5%, that person should reach $1 million in less than a decade.

The best part of a passion-project path to $1 million is that your excitement for the work will come naturally — which can really pay off if you combine that dedication with a smart plan. Paranormal young adult fiction writer Amanda Hocking made her books available through the Kindle store and ended up selling a whopping 100,000 copies per month. By selling each book for $1 to $3 each and keeping 70% of profits, she has made millions.

Love gaming or social media? Here are guides to making cash playing video games, posting on Instagram and launching your career as a YouTube star.

If the notion of reaching $1 million seems overwhelming, try breaking it down into baby steps. “I call it the ‘$50 a day early retirement strategy,’ where if you can save $50 every day, you’ll reach financial freedom faster,” Sabatier said.

The strategy takes discipline and creative thinking, but it’s possible. Start by using an app like Acorns or Digit that will help you find spare cash in your budget. You may not be able to save $50 every day right away, but you might sock away what you can and work your way up — and if you stash that cash in an account where you’ll earn a return (say, 6% a year), you could end up with a million bucks in less than 25 years.

Don’t have enough cash to spare to hit that $50? Look for ways to create or free up more. Get a roommate, cut out alcohol (or smoking), sell your eggs, sperm or hair — or be a cat sitter. “If someone in my condo building is willing to pay $20 for cat sitting, I’ll do it,” Sabatier said. “The $20 I make goes toward my $50 savings for the day and I’m already ahead.”

Not giving into FOMO can help a lot. After all, leasing a new car, renting an expensive apartment or dropping half of your paycheck on clothes and vacations might help you keep up with your friends, but it’s also a quick way to keep you from that $1 million goal.

Instead, figure out what you value the most and avoid wasting money on everything else. “I have an expensive watch that I love,” Sabatier said. “That being said, my clothing budget for the year is $300 because that’s not where I want to spend my money.” The average person spends about $1,800 on clothing each year, so you probably have a lot of wiggle room: Here’s how to save money on everything you buy.

3. Get that real estate dough

Too broke to buy a home instead of renting? If you live in a desirable location, your apartment, condo or home could still be your golden ticket — especially if you have other places to crash: While renting out your space through Airbnb can help anyone make some extra income, those living in destination cities like San Francisco, Chicago and New York can really clean up.

For instance, New York City hosts can charge an average of about $100 per night for a private bedroom, Business Insider reported. Subtract the 3% Airbnb host fee and you net $97 per night. No, of course you aren’t going to rent out your pad for the 28 years it would take to reach $1 million — but any amount of time that you can will add up. If you rented your space for the equivalent of one year, you’d be more than $35,000 closer to your goal.

Among other things, that’s money you could put toward a downpayment on a home you own. Indeed, being a savvy real estate investor can get you to $1 million, at least if you do your homework and don’t try to beat the market, Skylar Olsen, senior managing economist for Zillow, said in a phone interview.

Instead of purchasing distressed properties and flipping them for a profit, Olsen said investing in outlying areas — just outside the hippest, coolest neighborhoods — is the smarter way to make bank.

“Check out neighborhoods in areas adjacent to the city center, because they often tend to gain value much more quickly than homes in the city center,” Olsen said. Zillow calls this the “halo effect,” because after a few years these homes will pull up the values of homes in surrounding neighborhoods.

How can you cash in on your property? Patience — and a great location — is key. Nationally, those who sold a home in 2016 got 24% more than what they paid after living there for less than eight years, according to Zillow. Owners in Oakland, considered a sought-after city, sold their home for an average $590,000 in 2016 after living in it for just over seven years — a 78% gain.

Finally, you might consider renting out property to make money, as well. For instance, if you put down 20% on a property worth $100,000 and charged $750 in monthly rent (with $500 going toward covering your mortgages and taxes), you’d end up with $250 a month in pure profit.

At the end of the year, you’ll have an extra $3,000 — which you can start saving for another down payment for your next rental property.

Think doing your taxes is boring? You won’t when you hear this: “You may be able to save $1,000,000 in 35 years [with] tax deductions and credits,” Lisa Greene-Lewis, senior communications manager at TurboTax, said in an email.

“One thing to remember is credits are a direct dollar for dollar reduction to your tax liability, so they are going to get you to your million faster. But don’t discount and miss out on valuable deductions since they reduce your taxable income,” Greene-Lewis added.

Important deductions you can take include supporting your significant other (deduct $4,050), deducting up to $2,500 in student loan interest, claiming the American Opportunity Tax Credit of up to $2,500 and grabbing the Earned Income Tax Credit, which can be up to $6,318 if you are married and filing jointly with three children. Purchased a new home? A yearly mortgage interest and property taxes of $20,000 can reduce your taxes by $5,000.

Need more ideas? Check out these other ways to find tax savings you didn’t know were available.

5. Build a side gig off your day job

Hobbies and passion projects aren’t the only tickets to successful entrepreneurship. Sometimes simply using the skills and professional knowledge you have from your main job are all you need to make real income from a side gig.

Sabatier said, for example, he worked full-time as a website consultant — and then started blogging. That blogging, using many of the same skills, earned him $30,000 in six months, through advertising, affiliate commissions, Twitter chat participation, and reviewing and testing products among other activities.

Another example: Metro Detroit-based realtor Tamela Ekstrom-Derian shows homes by day, but she’s also on track to make up to $24,000 this year renting rooms out in her storybook cottage home. Derian could reach $1 million in less than 30 years if she invested her dough in a vehicle paying a 7% return.

Now, of course, starting a business can be a little scary. The key is to start with little to no overhead and use tax-advantaged accounts, said certified financial planner David Rae. “I’ve been working with a small business owner named Steve for about 10 years,” he said in an email. “When he launched his small business, we set up a plan where he would pay himself first: No matter how much or little he made, he put away 5% of his income” in tax-deferred savings.

Being a smart investor doesn’t mean going “all in” by buying up a single stock. It’s about being diversified, planning for the long term and considering taxes. Although the smart approach to investing may not be exciting, it can help you reach that $1 million goal.

“Let’s say you can stick with a disciplined program of putting $1,000 a month into [a] company retirement plan and IRA — $450 into the IRA and another $550 per month into your 401(k),” Christine Benz, director of personal finance for Morningstar, said in an email. “Assuming you invested in a broadly diversified portfolio like a total stock market index fund or ETF, you can expect a roughly 6% annualized return.”

Here are some ideas for strategic investments.

Inheriting money from a relative after they’ve passed away can be emotional, leaving the recipient with mixed feelings about the gift. “I’ve talked to so many people who feel guilty about the inheritance they are receiving that they often try and get rid of the money as fast as possible,” Rae said. But an inheritance is also a once-in-a-lifetime opportunity to get on track financially.

“Let’s say you received $200,000 and invest all of it wisely,” Rae said. “If you can earn 10% after taxes and fees, you could be a millionaire in as little as 17 years. Inherit more, or add to the pot and you can accumulate a million dollars even faster.”

Before you consider the best way to invest your money, calculate what you may owe in taxes, if anything. Unless you inherit more than $5.45 million, chances are you won’t owe any inheritance taxes. “If you are the beneficiary on an IRA or other retirement account, withdrawals will be taxable. But you can push that off by setting up an Inherited IRA and using this money for your own golden years,” Rae added.

The bottom line? Always keep your eyes open for additional opportunities to make and save money — and be patient.

Sign up for the Payoff: your weekly crash course on how to live your best financial life.