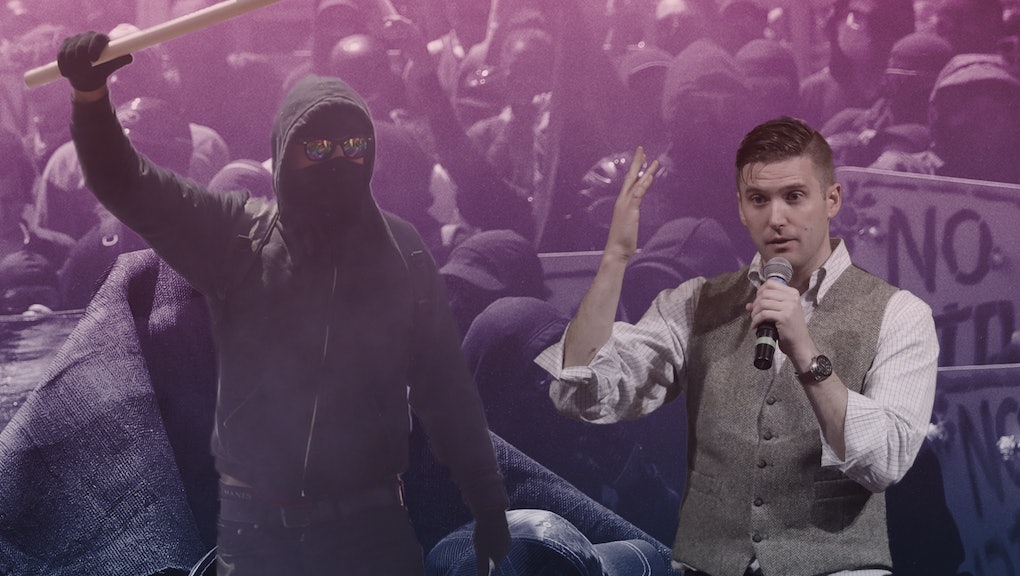 The University of Florida may have given alt-right leader Richard Spencer the green light to speak on campus Thursday afternoon, but many people on the Gainesville Florida campus community want to stop the event from happening.

Local antifascist activists say they won’t let the tiki-torch-wielding white supremacist air his views in their town without a fight — but the Anti-Defamation League says counterprotesting against Spencer’s event ultimately does more to aid his cause than it does to discourage his ideology.

“We’re going to cause as much disruption to Richard Spencer as possible,” Gainesville Antifascist Committee organizer Alan Gadze said in a phone interview with Mic.

The 46-year-old accountant who lives and works in Gainesville, Florida, said “Gadze” is not his real last name, adding that he and other antifascist protestors in Gainesville use aliases to protect their identities when they engage in counterprotests.

“We’re not there to initiate fights with law enforcement, but we will defend our protest,” Gadze said.

Thousands of people are expected to flood the streets and grounds surrounding the University of Florida’s Center for the Performing Arts to let Spencer know he’s not welcome there.

Some antifascist demonstrators angry about Donald Trump’s election and the resultant spike in the number of hate crimes against Jews, people of color and other marginalized groups have done whatever they’ve had to do to shut down far-right conservative speakers who visit college campuses across the U.S.

Antifa, at best, is a loose network of militant activists; not all antifascist demonstrators believe in using violence. Their tactics range from shouting speakers down and pulling fire alarms to smashing windows and setting trash cans ablaze.

Professional right-wing troll Milo Yiannopoulos’ scheduled speech at the University of California, Berkeley, in February was canceled due to safety concerns as activists who opposed him rioted in the streets the same night.

“When extremists come to town, our general guidance is not to show up.” — David Barkey

The militant progressive demonstrators who engage in this type of violence embrace an antifascist principle known as “no platform,” which mandates they prevent overt racists from spreading their propaganda and threatening marginalized groups “by any means necessary,” according to Mark Bray, author of Antifa: The Anti-Fascist Handbook, which was published earlier in 2017.

“By showing up to confront these events, it shows [that] every time Richard Spencer tries to speak it should never be normalized,” Bray said in a phone interview with Mic. Bray’s book presents the detailed history of antifascist movements in Europe and the U.S.

He said those who subscribe to antifascist ideology believe ignoring racists like Spencer is a recipe for disaster, pointing to the rise of the national socialist movement in Germany that preceded Adolf Hitler’s ascension to power.

“Allowing a neo-Nazi group to establish a presence in a community is guaranteed to lead to violence down the road,” Bray said. “If you drown them out and say, ‘This is reprehensible and dangerous,’ I don’t think that’s as likely to happen.”

But 2017’s antifascist demonstrations appear to be having the opposite effect in the U.S.

A month after rioters shut down Yiannopoulos in California, the “Patriot” movement took hold there, with conservative “free speech” champions organizing the March 4 Trump rally in Berkeley, which led to more violent clashes with antifascists.

The conservative and progressive activists clashed again at Berkeley in April, and once more in Portland in June.

Patriot activists like Joey Gibson have openly rejected Spencer’s brand of overt white nationalism, but have participated in rallies with white nationalists using their opposition to “antifa” as their common bond.

That all changed after the violence that erupted in Charlottesville, Virginia, on Aug. 12. Spencer was there when other white supremacists demonstrated in a “Unite the Right” rally, where they were again confronted by antifascist activists before James Alex Fields Jr. drove through a group of progressive demonstrators and killed 32-year-old Heather Heyer.

“We’ve been doing this type of work for a long time,” Barkey said, referring to the ADL. “When extremists come to town, our general guidance is not to show up.”

While those engaging in counterprotests against racism often mean well, Barkey said their passionate displays to shut down racist platforms attract media attention, unintentionally giving people like Spencer a larger platform and increasing the likelihood for violence.

“That’s usually what the extremists want,” Barkey said. “It brings more attention to themselves. It raises the potential of making them look like the victim. That sells well to folks [whom] they want to draw to their movement.”

The free speech violation, anti-political correctness mantra has been the rallying cry Spencer and other figures like Yiannopoulos who are commonly associated with the alt-right, have used to bolster their ranks on social media.

But antiracist demonstrators, like University of Florida student activist Chad Chavira, maintain that ignoring the bigots is not an option.

In an interview with Mic, Chavira said that since Trump ran for office, white nationalist groups like Identity Europa have increased their presence at the university, posting flyers around campus in attempts to recruit more followers.

“We don’t believe Richard Spencer’s speech is protected, because he calls for violence,” the 20-year-old said. “By us protesting, we stop him from looking stronger and spreading his message to curious people who are on the fringe and thinking about joining his movement.”

On the other hand, Barkey said those who want to oppose Spencer would have more effect doing it elsewhere.

“Our guidance is [to] have an event someplace else,” Barkey said. “We talk about making lemonade out of lemons, raising money for a good cause. If the extremists have their event and nobody shows up, that kind of dampens the impact they’re trying to have on the community.”