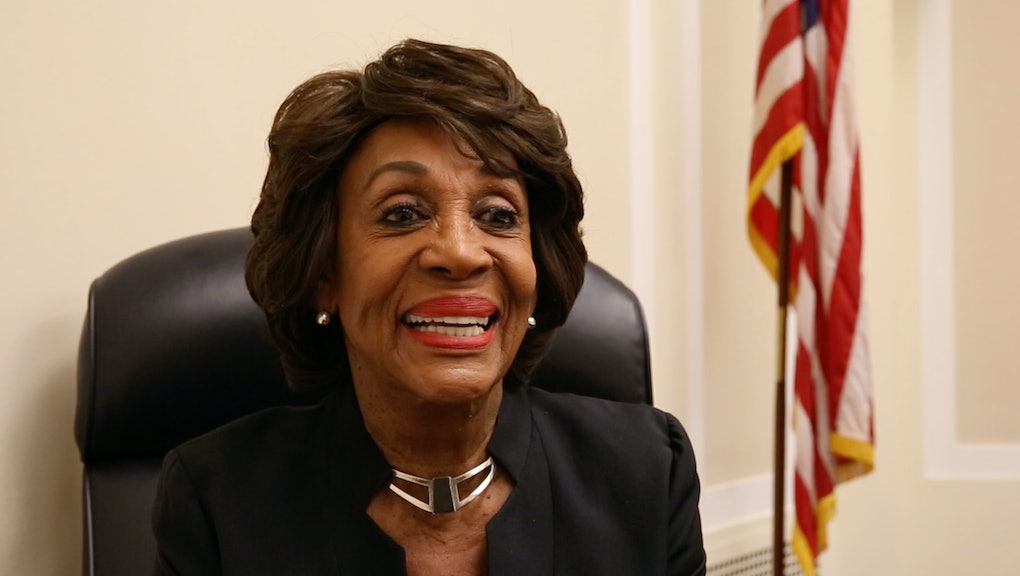 Exclusive: Maxine Waters wants to stop Jeff Sessions’ “racist” conduct at the DOJ in its tracks

WASHINGTON — Rep. Maxine Waters (D-CA) has announced a pair of criminal justice reform measures on Thursday that she says are intended to stop U.S. Attorney General Jeff Sessions from dismantling decades of progress on policing and drug sentencing policy.

In an exclusive sit-down interview about the legislation, Waters said she was prompted to act after Sessions “moved very aggressively, in a short period of time” to deemphasize the Department of Justice’s police reform program that addresses rampant civil rights violations exhibited by officers. In a memo to federal prosecutors, Sessions also signaled the return to the failed war on drugs, with harsher punishments for offenders.

Given those policies’ historic and disproportionately negative impact on black and Latino communities in her district, the Los Angeles-area congresswoman did not mince words about the attorney general’s underlying motivations and why it requires Congress to act.

“We’re trying to push back and fight against a man who comes to this very important office of attorney general with a racist background, with a background against all of the progressive laws that have been put in place, in order to deal with police departments,” Waters said. “We’ve been able to get some progress in relaxing the mandatory minimum sentencing. But the work is not done.”

The Demanding Oversight From Justice Act, which had a dozen cosponsors in the House of Representatives as of Thursday, amends an existing statute that requires the Justice Department to pursue civil action against abusive police departments. Waters wants to make it a certainty — where the statute says the DOJ “may” seek reforms, the bill replaces it with the word “shall” — that the attorney general pursues police reform agreements enforced by a judge like those currently in effect in Ferguson, Missouri, Cleveland and Baltimore. In those cities, elected officials and police leaders have agreed to take steps to curb abusive practices, including changing use of force standards and offering anti-bias training to officers.

Waters’ Mandatory Minimum Reform Act of 2017 does away with mandates on the length of punishments for federal drug offenses. The measure would restore discretion to judges, allowing them to make “individualized determinations” about offenders’ backgrounds and presumed danger to society at sentencing. The measure would also require the attorney general’s written consent on prosecutions for distribution or possession of drugs in amounts less than the minimum prescribed by the Controlled Substances Act.

Waters moderated a panel discussion with civil rights attorneys and criminal justice experts on both pieces of legislation, during a Thursday afternoon session of the Congressional Black Caucus Foundation’s Annual Legislative Conference in Washington. The discussion was titled, “The Danger of Attorney General Jeff Sessions in the Era of the Trump Administration: Mandatory Minimum Sentences, Voting Rights, Consent Decrees and Affirmative Action.”

Police abuse and mandatory minimum sentencing are issues Waters has worked on since her arrival to the House over 25 years ago. Even before her election to Congress, Waters took on former LAPD Chief Daryl Gates, whose brutal fight against drugs and crime in Los Angeles claimed the lives of black men and women who she represented in the state legislature. The 1991 beating of black motorist Rodney King by Los Angeles Police Department officers, and the acquittal of white officers in 1992, sparked protests and riots across the area. The ordeal influenced the enactment of 42 USC §14141, as part of the Violent Crime Control and Law Enforcement Act of 1994, giving the Justice Department the power to sue police departments that engage in a pattern or practice of abusive conduct.

The 1994 Crime Act also led to an explosion of the nation’s federal prison population, in part, because of the harsh sentencing for crack cocaine over other controlled substances. Nearly every year since then, Waters said she held workshops to push mandatory minimum sentencing reform. Although none have passed, she has introduced bills to eliminate the policy in the House multiple times. And now, with Sessions deemphasizing police accountability and sentencing reform, there’s a renewed fight in the congresswoman.

“You know, you’re not supposed to say you’re angry,” Waters said. “But I am. I don’t like it. I just think it’s abuse of power. It is abusive [for Sessions] to come in and try and undo what we have worked so hard for: to bring about justice and fairness.”

Sessions has dismissed Obama-era reports from Justice Department police investigations as anecdotal. In a statement to Mic in April, a DOJ spokesman said the Trump administration “will never negotiate or sign a consent decree that will reduce the lawful powers of the police department and result in a less safe city.” But research on consent decrees has shown they reduce the use of blunt and lethal force by police, and do not hold officer back from enforcing the law.

Since 1994, the DOJ conducted nearly 70 formal police department probes. But as of January, only 40 of those investigations resulted in consent decree agreements, according to a DOJ civil rights division report. Of those agreements, 18 are still in place.

Opposition to consent decrees is typically highest among conservative officials and police unions. In May, nine Republican state attorneys general, including Louisiana, South Carolina, Alabama and Texas, signed a letter urging Sessions to review and potentially end existing agreements. A federal judge in Maryland denied the Sessions DOJ’s request to postpone final approval of a police reform agreement negotiated during the Obama administration, after the in-custody death of Freddie Gray in Baltimore.

Monique Dixon, deputy director of policy at the NAACP Legal Defense and Educational Fund, said Sessions is the right target for Waters’ DOJ Act. “Yes, he should be called to task when he is not carrying out his duty to protect the civil rights of everyone,” Dixon said.

“To us, [Waters’] bill sends a message that members of Congress expect the DOJ to use all the tools at its disposal. There’s a culture of police abuse and misconduct that has to be addressed systemically. We’re happy that members are focusing on that,” Dixon said.

Waters said she knows reforming the criminal justice system is a long game.

“Why would I come here every day advocating on behalf of people who need representation, if I didn’t believe that I could make some things happen,” she said. “I go to bed every night, sometimes disgusted, but never hopeless. [Sessions] is taking us backward, with the support and the leadership of the president of the United States, who appointed him. So, no, I’m never going to give up. I’m in the fight.”