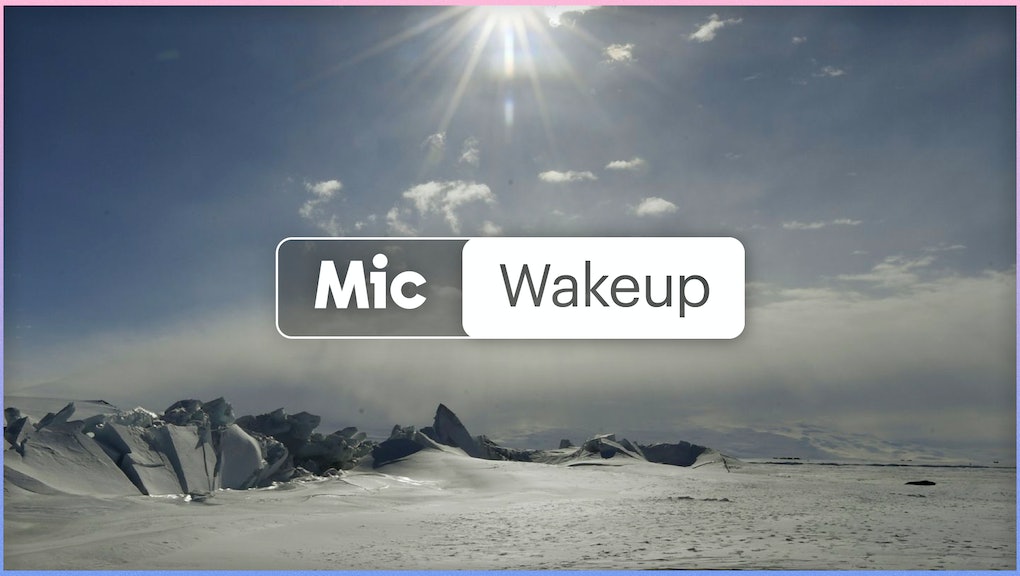 Mic Wakeup: Antarctica, Puerto Rico and patriotism are all in trouble

An enormous iceberg just broke off from Antarctica

We get it, climate change stories can seem daunting, far off and hard to comprehend, so let’s put it in perspective for you: An iceberg more than four times the size of Manhattan, NY just broke off from Antarctica.

That’s right, an iceberg large enough to house 6.4 million people just broke off from Antarctica, according to the U.S. National Ice Center. And this iceberg event comes just eight weeks after another a 2,200-square-mile iceberg broke off as well (that one was the almost the size of Delaware).

“It’s not the size of the iceberg that matters. It’s the frequency,” Ian Howat, a glaciologist at the Ohio State University, said to CBS News. “Infrequent big icebergs are normal — lots of little icebergs are abnormal.”

How worried should I be? While scientists cannot definitively say if climate change is the cause of icebergs melting and breaking off, they can say that warming waters and higher temperatures contribute to the weakening of ice shelves. “The fact that the calving events have gotten a little more frequent is not a good sign,” Chris Shuman of NASA’s Goddard Space Flight Center told USA Today.

It cannot be overstated just how bad things are in Puerto Rico right now. The island, which took a direct hit from a Category 5 hurricane one week ago, is still mostly without power or the ability to communicate with the outside world. And now, Puerto Rico’s leaders are having to plead for both the world’s attention and the government’s help.

“I know that leaders aren’t supposed to cry, and especially not on TV,” San Juan Mayor Carmen Yulín Cruz told CBS News. “But we are having a humanitarian crisis and we’re doing all we can, and the worst fear is that we cannot get to everyone in time.”

Cruz noted that while there are people on the ground ready to help, they are held up by the bureaucratic process and are waiting for “marching orders.”

“Hundreds of lives will be lost. And I don’t know how else to scream and shout and say it,” Cruz said. “This is the time for action.”

What can I do? Donate what you can to charities like the Hispanic Federation, which is collecting material goods such as clean clothes, diapers and more.

President Donald Trump has been busy misrepresenting what the #TakeAKnee movement is really about and telling everyone and anyone on Twitter just how unpatriotic he thinks it is. However, reporters like Bob Costas are here to help. As the famed sports reporter explained,

“Patriotism comes in many forms and what has happened is it’s been conflated with a bumper-sticker kind of flag-waving and with the military only so that people cannot see that, in his own way, Colin Kaepernick, however imperfectly, is doing a patriotic thing. And so too are some of these other players.”

Trump isnt the only one who needs to hear Costas’ words. Indeed, the National Football League is partially to blame thanks to its years-long effort to closely tie the American flag, the national anthem and the military to the sport.

As Mic explained, the tradition of playing the national anthem before a sporting event began with major league baseball during World War I. The tradition continued into WWII, when then NFL commissioner Elmer Layden said the “anthem should be as much a part of every game as the kickoff.” He added, “We must not drop it simply because the war is over. We should never forget what it stands for.”

Indeed, even the lexicon of the game of football closely mirrors that of the military’s.

So, should I take a knee or no? You should really follow your own heart with that one, but just make sure you fully understand what the movement is about and understand why we salute the flag in the first place. As Costas added, “We all respect their sacrifice; we all honor their sacrifice. Yet what it has come to mean is that the flag is primarily and only about the military.”