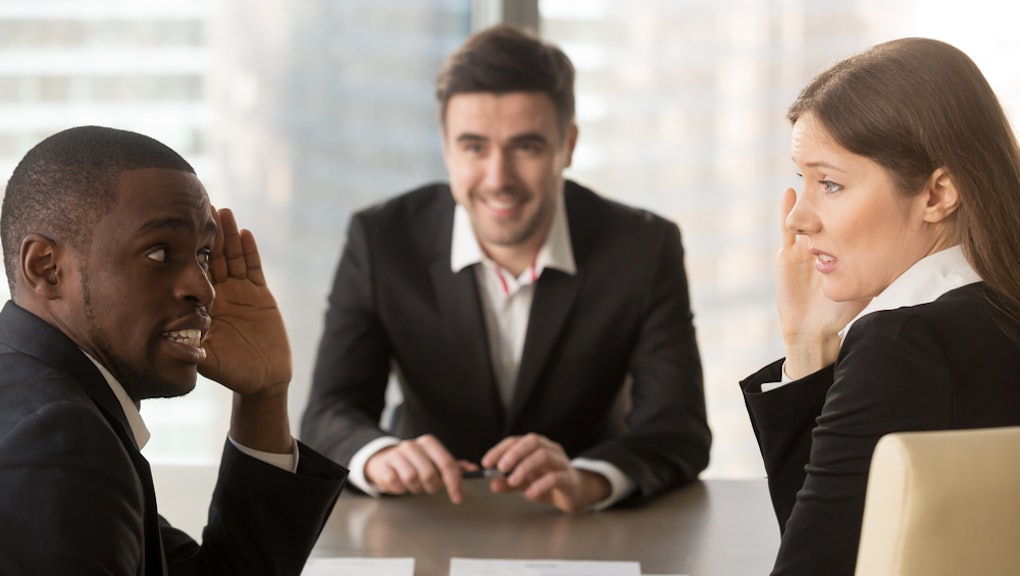 If you feel like “pinging” someone upside their head the next time they say “LOL,” you aren’t alone. In fact “LOL,” whether written or said aloud is the most hated buzzword, according to surveys of 1,000 adult Americans by cloud computing services company Summit Hosting, with “ping me” and “growth hacker” being almost as cringe-worthy.

While you already know not to use sophomoric words like “rock star” or “ninja” on your resume, what about after you’re hired? Will telling someone you’d like to create a synergistic environment, while still being able to grab that low-hanging fruit piss off your co-workers (not to mention your boss)?

You betcha. Although 47% of those polled in the Summit survey said it was better to hear certain catch phrases than to read them at work, 34% said reading and hearing them was equally annoying. Bottom line, no one wants to hear a slew of corporate jargon phrases.

So why do we repeat these phrases, even though we may hate hearing them ourselves? “It’s hard to avoid picking up certain buzzwords when you work in the corporate world 50-plus hours a week,” James Sudakow, author of Picking the Low-Hanging Fruit, said in a phone interview. “And if you’ve been in that world for a lengthy amount of time, you may begin to forget how else to say certain things. Like I heard the word ‘bandwidth’ so many times, it became harder to describe what I meant without just using the term.”

How to cure yourself of buzzword abuse

Even though certain phrases make your skin crawl, it’s easy to fall into the trap of using them because they are the quickest way to communicate your point.

The easiest way to stop is to become more aware of yourself using them and come up with alternatives that convey your point just as well. “Whenever I’m prepping for a meeting or a presentation, I’ll try to think of how to convey what I mean without using one of those buzzwords or how I would communicate the point with my wife, for example” Sudakow said.

Another trick is to track the number of times you say a certain jargony word in a week. If it’s more than three, it’s time to stop binging on buzzwords and go on a jargon diet.

It’s worth noting that some words are more annoying than others. Respondents found words like “transparency,” “best practice,” and “touch base” to be the least offensive. That said, 16% of the respondents said they fear any use of jargon or buzzwords could hurt their career.

These are the 10 top words to stop using right now

Summit came up with the most annoying words by asking survey respondents to rank them based on how annoying, intelligent and respectful they sounded. Here are the words and phrases with the lowest scores, along with the industries and age groups in which they are most commonly used (and abused).

It’s annoying enough to have someone ride with your idea, but having them say they are going to “piggyback” on your genius can be infuriating.

Nobody likes to read a long email (or text) but then again, hearing the term, “TL;DR” (too long; didn’t read) is pretty irritating, too. If you work in the arts or recreation areas, you are even more likely to use this term, which respondents said they’d rather hear than read.

Another way to express teamwork, “synergy” is a term generally no one wants to hear, especially if you are conversing in a casual, nonbusiness environment, possibly in the entertainment or recreation industry.

That easy sale or simple project may be referred to as a “low-hanging fruit” at work when you are trying to sound clever instead of just saying, “let’s take the easy way out.” If you use the term in a group of baby boomers, they may look at you like you are nuts, since Gen X and millennials are the groups most likely to toss this term around.

6. Run it up the flagpole

If you work in manufacturing, the only thing your co-workers are going to want to see running up the flagpole might be your underwear, as this term is considered to be the most annoying phrase in this industry. It doesn’t do much better for those working in hospitality as well as legal or scientific fields, and those who work in technology pretty much hate it, too.

ICYMI, which means “in case you missed it,” is probably a term you would want to miss, as it ranks pretty high on the list as most annoying. Freely used across all generations, using “ICYMI” in a casual setting is a quick way to lose another person’s respect.

Those who want to sound more tech savvy might use the term “Internet of things,” which refers to internet-connected devices like a refrigerator or the Amazon Echo, and is used across generations. Unfortunately, this term could make colleagues lose respect for you at work, especially if you work in the legal field or in finance, manufacturing, marketing and information technology.

You might produce an eye roll in a business setting if you start talking about “growth hacking or being a growth hacker.” Generally used in marketing when referring to the next big idea or thing, “growth hacking” seems to be the least annoying term in industries (and even within small departments) like finance, legal, manufacturing, medicine and science.

“Ping me” simply means that you’d like to be sent a message by text or email because you are busy. Among the top “least acceptable” words, using “ping me” could do harm to your career and personal relationships than good because it could lower the level of respect the recipient has for you, both at work an in your personal life.

By far the most cringe-worthy term, “LOL” or “laugh out loud” in written or spoken form won most annoying. Every generation is guilty of using this term and Summit found it to be equally annoying to pretty much everyone. LOL.