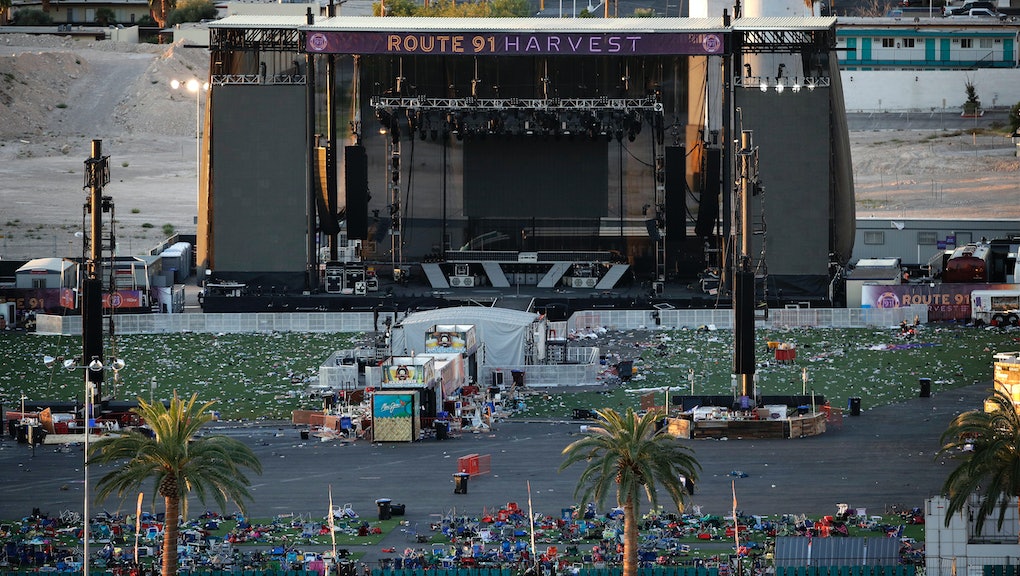 SEOUL, South Korea — For the last few months, I’ve been an American living in South Korea, a nation that has technically been at war for nearly 70 years. In the same way that many of my American friends ask me if I feel safe amid the heightened tension between North Korea and the U.S. (yes, I do), South Koreans often ask if I felt safe back at home.

That’s a fair question. To much of the world, the U.S. is known for many good things: richly diverse cities, top-notch universities, dreams of social mobility. But tragically, it’s also known for its gun violence problem, with death tolls from mass shootings creeping higher and higher in recent years. The Oct. 1 shooting in Las Vegas, which left at least 59 people dead and 527 injured, is now being called the deadliest mass shooting in modern American history.

“In other places like the U.K. and Australia, you see government forces come together to pass legislation that basically enacts tighter gun restrictions after tragedies of this scale — or even tragedies of a smaller scale,” Louis Klarevas, a professor of terrorism and counterterrorism at University of Massachusetts, Boston and author of Rampage Nation, said by phone. “That’s the difference between the U.S. and other countries of the free, Western world.”

Mic asked policy experts and international citizens for their honest perspective on America — and how its reputation has changed over time.

“It genuinely breaks my heart”

America’s love of guns can be perplexing to people from other countries and cultures. Sushant Pasumarty, a 23-year-old software engineer from Hyderabad, India, called it a “foreign concept.” He remembered being “flabbergasted” as he walked down the aisles of a Walmart for the first time on a 2015 trip to the U.S.

“I saw a specific aisle just for guns, and it really blew my mind,” he said. “It genuinely breaks my heart that these mass shootings are getting common now. As an outsider who reads the news every day, I hope this changes. I want to go back to the calmer world we had a few years ago.”

Thirty-one percent of the world’s mass shootings between 1966 and 2012 happened on American soil. In total, there have been more than 1,500 mass shootings of four or more people in the U.S. in the last 1,735 days (about 4.75 years), the Guardian reported. In general, American gun violence is incredibly common — about 3.6 per every 100,000 people die by firearm homicides in the U.S., according to a 2010 study. The next-highest firearm homicide rate in that study is just 0.5 people per every 100,000 in Canada and Portugal.

“I want to go back to the calmer world we had a few years ago.” — Sushant Pasumarty

Though large-scale terror attacks have hit the U.K., France and elsewhere, continued political gridlock on American gun regulations feeds much of the frustration.

“What is it going to take for something to be done — for something to be changed?” Eduardo Silva, a 22-year-old political science student at New York University who immigrated to the U.S. from Brazil in 2012, said. The same year he arrived, he remembers feeling “shocked” by news of the shooting in Newtown, Connecticut, where 20 elementary school children and six school staff members died.

“Records just keep being set. First it was kids, then it was people at a gay club [Pulse nightclub in Orlando, Florida], and now it’s just people at a music festival,” he said. “It brings me back to the sort of [gun violence] that happens in Brazil — there, a lot of times it’s members of gangs that get into fights. But here, it hardly discriminates.”

One has to wonder: To the outside world, do all of these shootings make the U.S. seem unsafe?

Matthew Kepnes, a 36-year-old travel writer known as “Nomadic Matt,” has been asked that question so often in his trips to about 100 countries that he decided to address it in an article.

“I get lots of questions about the likelihood of being shot in America. They wonder if everyone is really armed and how safe they need to be,” Kepnes wrote in an email to Mic. “Most people think of the United States as a sort of crazed, gun-obsessed nation. They can’t understand why we let these things continue to happen.”

“I get lots of questions about the likelihood of being shot in America. They wonder if everyone is really armed and how safe they need to be.” — Matthew Kepnes

Without hard research on how the rest of the world rates U.S. safety, it’s hard to measure how mass shootings and smaller-scale gun violence are widely perceived. But social media posts, headlines from foreign countries and international tributes make it clear that other countries are at least watching.

“[Other western democracies] are very aware about our problems with large-scale gun violence, mass shootings and gun massacres,” Klarevas said. “They certainly recognize we have a problem, and in many cases, they share our heartfelt concerns about it.”

“I’ve always thought that the U.S. was very safe, but in the past few years, I would say that has changed. There’s been a lot of these incidents,” Pasumarty said, noting that some people in Hyderabad publicly rallied for parents to stop sending their kids to study in the U.S. after the alleged hate crime shooting that killed Alok Madasani, an Indian immigrant in Kansas, on June 9.

“Everyone dreams of going to the U.S. to study for their master’s degree — that’s a huge achievement to say, ‘I’ve made it to one of the best countries in the world to further my career,’” Pasumarty said. “I fear that if the U.S. doesn’t fix its gun problem, it will really affect this.”

“Everyone dreams of going to the U.S. to study for their master’s degree. I fear that if the U.S. doesn’t fix its gun problem, it will really affect this.” — Sushant Pasumarty

Other evidence of concern: In 2015, travel insurance company World Nomads published a briefing on American gun crime, dedicating an entire section to the question, “Should I be scared of a mass shooting?” (The answer was no.) Questions about the future of tourism in Orlando, Florida, also arose after the June 2016 Pulse nightclub shooting that killed 49 people and injured more than 50 others. At the time, the Telegraph in the U.K. wrote an article titled “Should I be worried about my holiday to Orlando?”

“[All the time], I meet people who put off trips after every mass shooting. Everyone reacts to the news,” Kepnes said. “But this is no different than Americans canceling trips in Europe after a terror attack.”

“You still hear about Columbine.”

The incident in Las Vegas may be the latest large-scale moment of violence, but the U.S. has suffered widely publicized mass shootings for years now. Mohamed Garib, a 23-year-old business strategy consultant in Dubai who has lived in both Saudi Arabia and Egypt (where he’s originally from), mentioned how the 1999 Columbine shooting that killed 13 Colorado high school students in college is still a talking point overseas.

“You still hear about Columbine online and on forums. You just keep hearing random facts about what happened,” he said, adding that he would definitely go to the U.S. again even though he finds the “increasingly common” mass shootings concerning.

“I saw threads on Reddit today about how to identify the sound of gunfire. You know, civilians shouldn’t have to know what gunfire sounds like to be safe,” he said. “I’ve lived in Saudi Arabia my whole life and I’ve never heard or seen a gun being shot.”