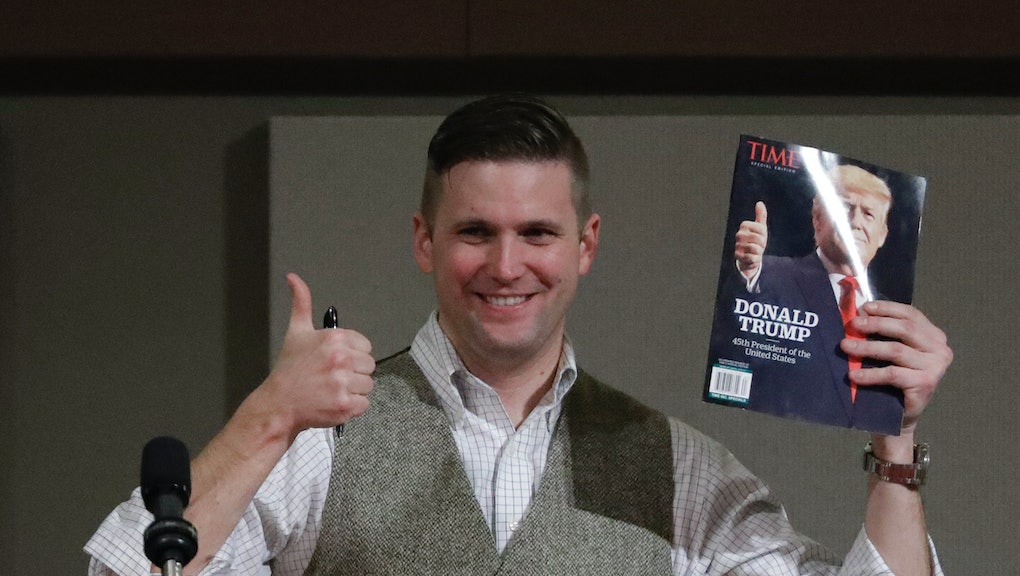 No one at the University of Florida invited Richard Spencer to speak on campus Thursday and school administrators would prefer he didn’t come at all.

“His rhetoric is offensive and goes against everything this university stands for,” UF assistant vice president of public affairs Janine Sikes told Mic during a Wednesday morning phone interview. “If it was an easy choice we would say ‘no.’... This was not a willy-nilly decision. We weighed a lot of options.”

Sikes pointed out that UF is a public school, and if they refused to let Spencer speak, there might be grounds for a First Amendment lawsuit.

Padgett successfully sued Auburn University earlier in 2017 after the school tried to deny Spencer a venue. A federal judge ruled in their favor, allowing Spencer to deliver his address on April 18, according to the Washington Post.

He also sued Michigan State, disputing that school’s contention that Spencer’s presence on campus is a safety concern.

Padgett and his current Michigan-based attorney Kyle Bristow recently threatened to sue both Ohio State and the University of Cincinnati if those schools refused to let Spencer speak as well. UC administrators chose to let Spencer speak, but the final details of his speaking event have not been set.

“As a state institution, we must adhere to the foundational rights embedded in the First Amendment,” UC president Neville G. Pinto wrote in an Oct. 13 statement to his campus community. “That includes protecting speech of all types at all times—even, perhaps especially, words that are blatantly hateful or offensive.”

“Some of those schools recognized they are likely to be held liable by the courts,” he said, referring to the federal court ruling on Spencer speaking at Auburn. “Schools that are not public can better determine who they’ll allow on campus.”

OSU still stood its ground on Friday, after stating previously that a visit from Spencer would pose too great a security risk.

“This request cannot be accommodated without substantial risk to public safety,” OSU senior vice president and general counsel Christopher Culley wrote in a letter to Bristow, which the university also provided to Mic. “The university is currently considering other alternatives for Mr. Padgett’s request.”

In the end, UF administrators, according to Sikes, decided keeping Spencer off campus wasn’t worth the potential legal fight, since a lawsuit would likely result in a court order requiring them to let him speak anyway.

She said providing security for the event is expected to cost the school more than $500,000.

“We would rather have control of some of the event as opposed to having a court order us to have the event without us having the time to create a comprehensive security plan and have input into other factors,” Sikes said.