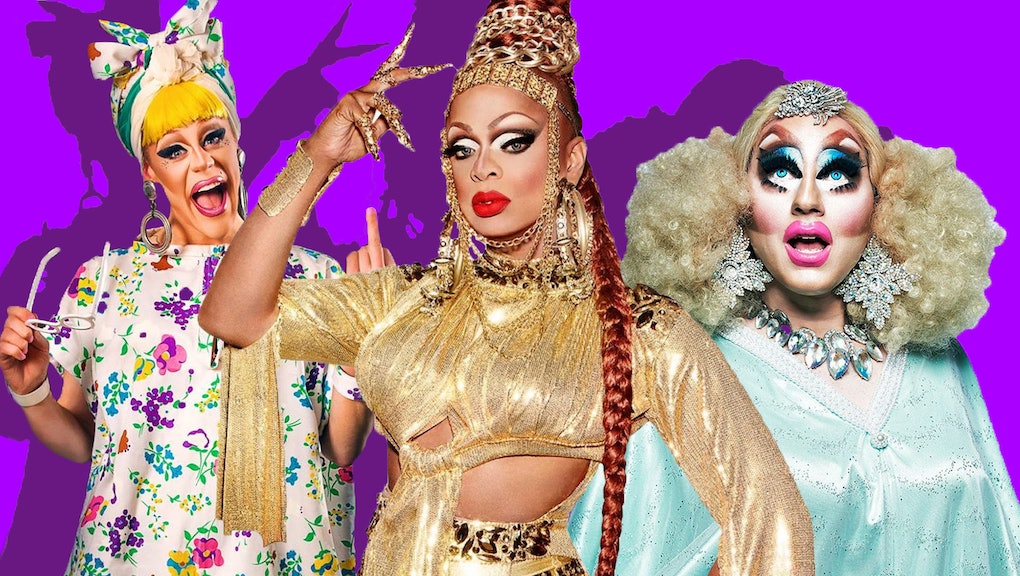 On Friday, an hourlong VH1 special “ruvealed” nine of the queens who will be competing in RuPaul’s Drag Race: All Stars 3, an upcoming season of the drag queen reality-competition show that features competitors from previous seasons who want — nay, need — another chance at victory.

But for a highly organized, Drag Race-obsessed corner of Reddit, not much about the special was a surprise. It was vindication.

For months, fans of the show had been coordinating on /r/RuPaulsDragRace — as they have for the show’s past several seasons — to “Nancy Drew” this season’s cast before it was announced. Their predictions of which drag queens from previous seasons would appear on All Stars 3 were 100% correct, about as accurate as it had been over the last few years, with just a few exceptions.

This whole process of uncovering which rising drag stars were going to break onto the mainstream platform of RuPaul’s Drag Race started before season six. But 2015’s season seven was the first time Nancy Drewing, as these redditors call it, became an established, mathematic art form. They predicted that season’s cast with 100% accuracy.

“Since then, we’ve only really gotten one queen wrong ever,” Reddit user robbysaur, one of the main Nancy Drews leading All Stars 3 speculation, said in a phone interview with Mic. “For season eight, we did not get Laila McQueen because Skarlet Starlet went on a social media break — and then the day before the reveal, she said she was calling off work and really made it seem like she was on.”

Robbysaur’s accuracy claim is almost true. His final All Stars 2 cast prediction post didn’t leave anyone out, but he predicted a few extra queens who weren’t on the show. In a private Reddit message to Mic, robbysaur said he stopped updating the post because a close friend with ties to the show told him the final cast ahead of time, and he didn’t want to raise suspicion from the rest of the subreddit.

If you’re counting, that means /r/RuPaulsDragRace correctly predicted every single contestant for seasons seven, nine and All Stars 3, with just a few minor mistakes in season eight and All Stars 2. (At the end of Friday’s All Stars 3 special, RuPaul teased that a tenth queen had yet to be revealed. The Nancy Drews think it’ll be season one winner, BeBe Zahara Benet. So, jury’s still out on that.)

So, you want to help unveil the next season’s cast of RuPaul’s Drag Race? Here’s how these redditors clock which queens are going to show up.

First, you compile a list of who’s who in the drag world and stalk the hell out of them on social media. If a prolific queen suddenly falls off the face of the Earth around the time filming is supposed to start, that’s a major red flag. For example, the final Nancy Drew thread for season eight noted the date ranges all 12 contestants went without posting. (Superfans can even spot when it looks like someone else is suddenly managing a queen’s social media, as was the case with Pearl in season seven.)

The next step is a bit harder, but the goal is basically the same. You have to keep an eye on popular venues, like gay bars and nightclubs, to see which queens are booking regular gigs during the filming dates — and who is suddenly taking an unexpected vacation.

Nancy Drews don’t mess around, either. If you come to the subreddit with tea, you have to bring receipts.

“Otherwise, people on the subreddit are going to question you until they really see a receipt that someone does have a gig in Puerto Rico on Aug. 23,” robbysaur said.

Those are the tried-and-true methods the subreddit uses most, but clues often come from old-fashioned scuttlebutt exchanged over drinks at a gay bar or lunch with your friend who works for a fashion designer.

For example, maybe someone got an email from the employee of a nightclub saying BenDeLaCreme canceled her gig because she mentioned, in passing, that she’s on All Stars. Or maybe you heard through unnamed sources that Thorgy Thor has been putting together a massive collection of killer outfits.

Interestingly enough, robbysaur’s conflict about whether to share his connections to the inner workings of Drag Race with his fellow redditors says something larger about the way this whole process works: Since many of these people have very real connections to the world of drag, Nancy Drewing is as much a game of leveraging contacts in their personal lives as it is a game of social media stalking.

And sometimes, failing to find a balance between the two can be your undoing.

Enter naivesmalls, /r/RuPaulsDragRace’s most mysterious, prolific Reddit user who recently fell off the face of the Earth.

“OK, so naivesmalls — I think it’s pronounced ‘ny-ee-vay’ — they had basically given us all correct information for season nine,” robbysaur said. “They told us who was lip syncing, who was winning the challenge, who was winning the lip sync, what the runway themes were, what the lip sync songs were, etc. etc. — everything. And they got it all correct.”

Nobody really knows how naivesmalls got their information, but it was the real deal. They started popping up in the All Stars 3 speculation threads, yet again dropping intel about who was going to appear. And then something changed.

“They messaged me a couple weeks ago saying they got a message that Reddit was trying to ban their account,” robbysaur said. “And there was a period on the subreddit where any comment that mentioned naivesmalls’ name was automatically deleted, which was really bizarre.”

A screenshot of private messages exchanged between robbysaur and naivesmalls regarding those deleted posts is embedded below. Since naivesmalls’ account no longer exists, the messages display as being sent from “[deleted].”

It’s not clear why naivesmalls’ messages were automatically flagged, but some members of the subreddit — if you’ll forgive the donning of tin-foil hats for a moment — think it’s part of a conspiracy by World of Wonder, Drag Race’s production company, to keep Nancy Drews from uncovering the show’s secrets ahead of time. One Reddit user, mistyday32, told Mic in a private Reddit message they thought naivesmalls was probably banned for “spilling too much tea.”

In all likelihood, naivesmalls probably just violated the subreddit’s rules for the proper marking of spoilers — but where’s the fun in that?

“I really think it’s all of us feeling our fantasies and creating all of these theories about what our relationship is like with the studio,” robbysaur said.

Despite naivesmalls’ disappearance, they won’t be gone for long.

“They did tell one of our trusted users that they will be back and they gave them a little clue about when they come back, how we will know,” robbysaur said. “It was almost like Christianity, when we’re expecting the second coming of Jesus and there’s gonna be all these apocalyptic symbols before it happens.”

But that wasn’t the only time something weird happened that made robbysaur suspect World of Wonder was trying to interfere with the Nancy Drew threads. Robbysaur said he recently received messages from someone claiming to have attended a live taping of an All Stars 3 episode that didn’t quite add up.

But then, robbysaur said the person’s messages conflicted with intel he got later that suggested Darienne Lake wasn’t on the show. Robbysaur said he thinks someone from WoW — who identified themselves in a private message as a “longtime lurker” — was intentionally feeding him false information to throw him off the scent. When robbysaur pressed this person for details, they stopped responding.

A screenshot of their exchange is embedded below, with their username blurred out to preserve their anonymity. Robbysaur’s messages are in green.

Then again, maybe they were just a run-of-the-mill Reddit troll. Nobody’s really sure. But with season 10 of RuPaul’s Drag Race right around the corner, it’s likely not the last example of shady behavior that’ll come out of /r/RuPaulsDragRace.

“I go back to Paris Is Burning, where they say that sometimes — and they use the word ‘faggot’ — they say, ‘Faggots can pull a stunt and nobody will ever know,’” robbysaur said. “So when you get a big group of people, of queer men together [who] are all secretive and shady, and they work in the drag industry and they’re all trying to hide these things and be petty — honestly, I think it’s kind of fun. I’m not mad at them for it.”