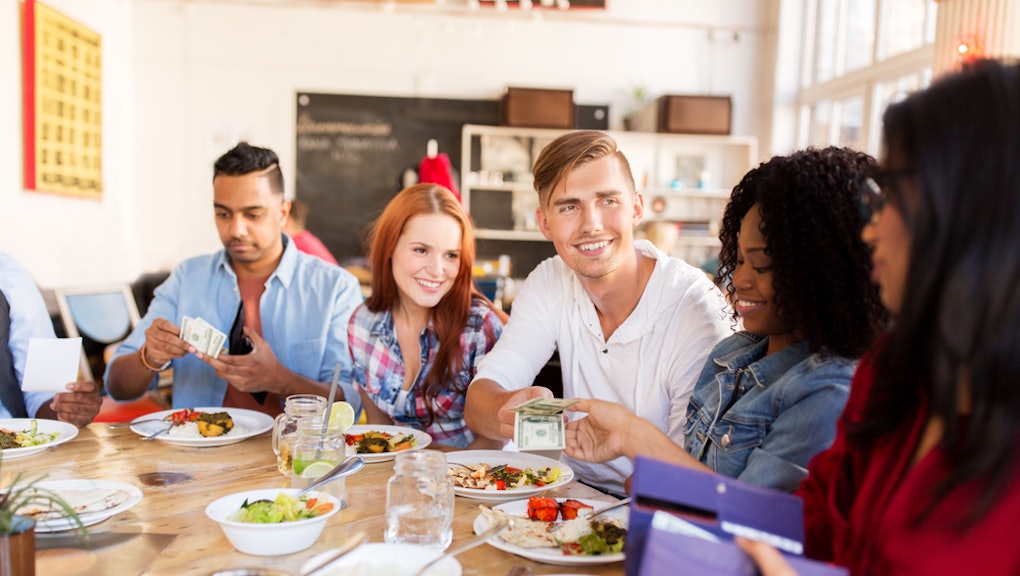 3 money-saving secrets to being frugal — but not cheap

You don’t have to be broke to be mindful about how you spend your paycheck. For basketball star Lebron James, who brought home a mind-boggling $86 million in the last year and has a net worth around $275 million, being thrifty is a badge of honor. When teammate Dwyane Wade called James the cheapest guy in the NBA during an ESPN interview in October, James joked, “That is so, so, so, so falsely true,” before adding, “I’m not turning on data roaming. I’m not buying... apps. I still got Pandora with commercials.”

But here’s the kicker: Even though James refuses to drop cash even on a $5 a month streaming service, he’s actually a pretty generous guy. His nonprofit, the Lebron James Family Foundation, is teaming up with Akron Public Schools to launch a new school designed to educate students at risk in his hometown of Akron, Ohio. He also plans to spend millions on guaranteed, four-year scholarships for 1,100 kids at the University of Akron.

James is hardly the only uber-rich person who balances penny-pinching habits with acts of generosity. Warren Buffett, Bill Gates and Mark Zuckerberg have all opted to spend less on costs like cars, homes and services, while promising much of their wealth to charity. But their habits raise the question: What’s the difference between being cheap and being frugal? And how can you save money without being a total cheapskate? Here are some answers, plus some tricks to saving more cash without sacrificing your sanity — or your friends.

Are you cheap or frugal?

Choosing how you spend your money can make a tremendous difference on whether you are considered “cheap” or just “frugal” among your peers. “It’s okay to embrace your role as the frugal member of your group of friends,” Erin Lowry, author of Broke Millennial said in an email interview.

One big differentiator between cheap and frugal folks is that frugal people look at the overall value of an experience, service or product rather than just the sticker price. “Being frugal means making smart... choices that save you money, which is very different from cheap, which means you take frugality to such an extreme that it negatively impacts the lifestyle of you and the people close to you,” said NerdWallet credit and banking expert Kimberly Palmer.

In some cases, being frugal actually makes others happy — because it opens the door to the entire group to keep the weekend or excursion on a budget. But “you should also remember that you’re not always just spending money on an event, but sometimes it’s about investing in the friendship,” Palmer said. “Saying no too many times could mean you stop getting asked. It’s important to find a middle ground between continuing to cultivate and investing in your friendships as well as saving and reaching your financial goals.”

And beyond the way a reputation for cheapness can hurt your relationships, being too cheap when you shop for certain items can actually be unsafe — putting your health and even your life in danger.

3 smart ways to be frugal and save money

Some good news? You can be a money saving expert without being cheap; it’s just a matter of making those smart, invisible choices that really add up.

“Some small steps include renegotiating bills, using a cash-back credit card and opening a high-yield savings account,” Palmer added. “There’s nothing cheap about any of those choices, but making them can save you a significant amount of cash by the end of the year.”

Here are other moves to help you be frugal without going overboard:

1. Pick your money-saving battles when eating out

“Dining out with friends can be incredibly stressful for your budget,” Lowry said. After all, the dreaded, “let’s just split it five ways” — after you’ve only had water and a side salad — sounds like nails on a chalkboard to anyone trying to save money. In those cases, you can push back: by calculating your exact bill, plus 15% to 30% to cover tax and tip, and paying with cash or Venmo (or other similar apps). If this is a chronic problem, you might simply ask ahead of time for your bill to be separated from the rest before you order.

“I... hate the awkward moment when the check comes and people sit and stare,” said homemaker Rachel Rhyneer of Festus, Missouri. “Rather than get into that situation, I first tell the server I need a separate check with my order.”

Of course, other times you’ll need to just chill. “There are times when splitting the bill will be protocol, a friend’s birthday for instance,” Lowry said. “It may mean you need to bow out before attending, if the menu prices are well out of your budget range.”

One generous alternative? Invite your friend over for a celebratory home-cooked dinner instead, or offer to take them out for drinks. Another trick to avoid seeming ungrateful or antisocial: “Use the old compliment sandwich technique: ‘I appreciate being invited and want to see you, but I can’t afford or don’t want to spend money going to brunch... could we grab a coffee and go for a walk in the park instead?’ It’s always helpful to provide a solution in tandem with creating a problem,” Lowry said.

Remember: If ever you split a bill and overpay by a small amount, let it go, rather than arguing down to the penny. Unless you truly think your friends are taking advantage, it’s not worth damaging a friendship over three dollars.

2. Hack your gift-giving strategy to save big

Remember when you were a kid — and making hug “coupons” for dad was adorable? Of course, if you are in your 20s or 30s, handmade IOUs as a gift comes off less as cute and more like “total cheapskate.” Still, there are ways to prevent the financial drain of the holiday season: Just use some smart gift-giving hacks to find presents for less.

One insider tip is to shop for gifts when retailers are offering deep discounts. “One of my favorite gift-giving tactics is to shop wedding registries during holiday weekends,” Lowry suggested. “Lots of people register with major department stores like Macy’s, which do big holiday sales. You can almost always get a nice wedding gift for at least 20% off.”

But you can also create a gift that looks thoughtful and expensive but isn’t — like a personalized gift basket with a theme of “favorite things” you know your friend loves. The best thing about a personal gift is that you can use it for all kinds of gift-giving occasions, like weddings, birthdays, housewarmings or even holiday presents for coworkers. Here are some easy gift ideas in different price ranges, and here are more secrets to cheap gifts people will cherish.

3. Unleash your cheapness on those who deserve it

Instead of trying to pay less for social occasions or bowing out altogether, rethink what you spend on the bills you pay to strangers — like your cable company — so you can be a little freer with what you spend on friends. If you’re smart about reining in your spending today, you’ll have more money to save in the future... and sometimes all it takes is a couple phone calls.

Some “small steps” NerdWallet identified that could produce nearly $5,000 in yearly savings include renegotiating bills ($600), using a cash-back credit card ($400), opening a high-yield savings account ($60), shopping around for better auto insurance rates ($859) and refinancing a mortgage ($2,988).

You can also take a hard-lined approach to saving money on food by taking our “how to spend just $5 a day on food” challenge or save tons of cash on travel if you are strategic with your travel dates. Regardless of how you approach saving money, you can still stick to a budget without being cheap.