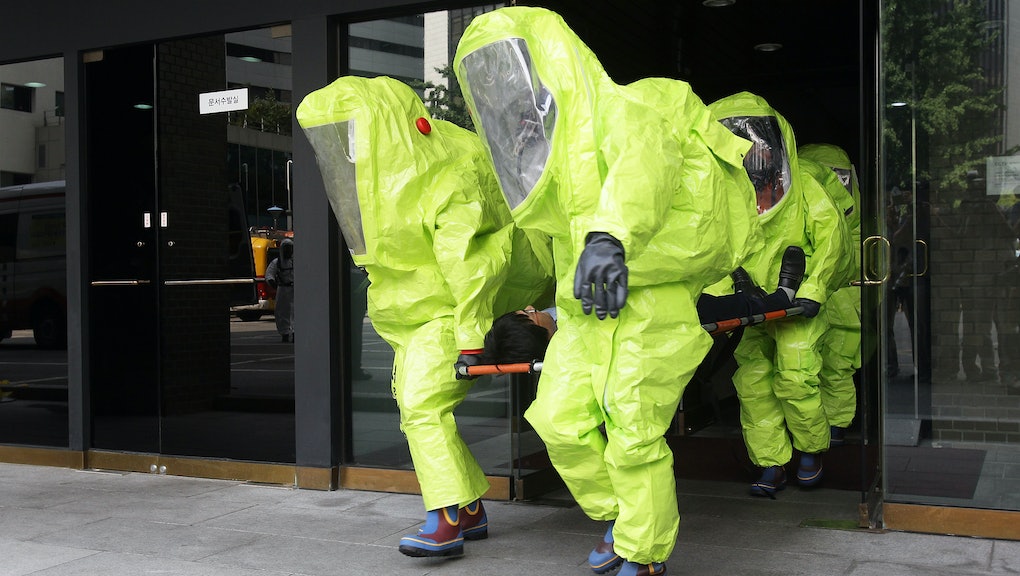 In addition to its nuclear capabilities, North Korea has the ability to douse thousands of people with lethal doses of anthrax, smallpox and viral hemorrhagic fever according to a newly released report from the Belfer Center for Science and International Affairs at Harvard University.

Kim Jong-un’s regime is thought to have the third-largest chemical weapons supply in the world, and its arsenal includes at least 13 types of biological weapons. The Belfer report on the Hermit Kingdom’s biological weapons spells out the magnitude of the problem and indicates the information that is still missing. As it turns out, the threat from the isolated Asian nation isn’t limited to nukes and intercontinental ballistic missiles.

“North Korea has a very advanced biological weapons program, and it is extremely dangerous because it can be delivered covertly,” Andrew Weber, a former U.S. assistant secretary of defense for nuclear, chemical and biological defense programs, said in an interview with Mic. “Honestly, I wish these threats were taken as seriously as the nuclear weapons threat — because they should be.”

Biological warfare is the act of intentionally releasing infectious diseases onto a population. Bioweapons are inherently different than chemical weapons, as they encompass contagious agents like smallpox or toxins that cause disease. Anthrax, for example, is a bioweapon.

Bioweapons can be unleashed in a number of ways: via contaminating food, by attaching spray tanks to drones or by using aerosol technology found in everyday pesticide foggers, to name just a few methods.

In 1984, 751 people got food poisoning in a bioterrorism attack involving contaminated salad bars across a small number of U.S. restaurants. And in 2001, five Americans died from Anthrax-laced letters. While these are smaller incidents, they show the huge potential for damage: “A few kilograms of anthrax, equivalent to a few bottles of wine, released into a dense city could kill 50% of the population,” the Belfer report said. Technically, we’re talking about weapons of mass destruction here.

“A single person with a backpack sprayer could deliver tens of thousands of lethal doses of biological weapons,” Weber said. “And if [that agent] spreads from person to person like smallpox, they would only have to infect a few people for it to become a global catastrophe.”

Weber is concerned that biological warfare is the most strategically sensible option for North Korea to attack another nation — even before a hypothetical full-blown war — because although the technology exists to differentiate a natural outbreak from a bioterror attack, there isn’t always a scientific means of proving who initiates it.

“It’s hard to attribute blame,” Weber said. “Frankly, that deniability and uncertainty is what would make this type of attack more attractive to the [Democratic People’s Republic of Korea] regime. I think it would be used in what I would call a mobilization period ... in a period of tension not unlike today, where the concern is that the United States is building up its military presence and preparation for war.”

Imagine North Korea unleashing bioweapons on ports and air bases to slow down armed forces, Weber said. In a civilian attack, diseases could be covertly deployed in dense cities like Tokyo and Los Angeles. North Korea just recently demonstrated both the ability and audacity to smuggle a chemical weapon — VX — into a Malaysian airport in February. This instance led to the death of Kim Jong-un’s half-brother, Kim Jong-nam.

“If they can deliver VX into Malaysia and get it into the country secretly, they can do the same, even more easily, with biological weapons,” Weber said. “This is a burning concern of mine, that they could use biological weapons in peacetime. It’s more likely they will use [them] than nuclear weapons, I think.”

But the public shouldn’t panic, Weber said, and others are less convinced that biological warfare is likely or would be North Korea’s first means of attack.

“In my opinion, it’s really hard to imagine,” Melissa Hanham, senior research associate at the Middlebury Institute of International Studies, said in a phone interview. “Part of the reason [biological weapons] were so easy to ban was because armies didn’t like using them. It risked their own soldiers too much.”

But bioweapons have their advantages: They’re quiet, they don’t require large stockpiles like chemical weapons and doctors might not catch them early enough. Anthrax symptoms, for instance, look a lot like the common cold.

While North Korea hasn’t exactly admitted to having biological weapons, assessments from the U.S. and South Korean governments indicate the DPRK became capable of biological warfare as early as the 1960s. Several North Korean escapees have confirmed this.

In 2015, DPRK state media touted images of Kim Jong-un strolling through an alleged pesticide facility called the Pyongyang Bio-Technical Institute. Photos and satellite images of the structure suggest it could be capable of producing both Bacillus thuringiensis, a bacteria used for insecticide, and Bacillus anthracis for anthrax.

“There really isn’t a sound reason for North Korea to need this kind of facility,” Hanham said. “They can address any food insecurity they are having with chemical pesticides rather than biopesticides — it’s cheaper and easier.”

Both the Soviet Union and Iraq had “dual-use” facilities as cover-ups for bioweapon production, Hanham added, leading her to believe it’s history repeating itself.

“It’s expensive. It involves laundering money and finding shipping methods to get all that stuff in the country. It’s not simple,” she said. “They went through a lot of trouble to build that place.”

Both Bill Gates and Nathan Myhrvold, former chief technology officer at Microsoft, have been vocal about their fears of bioterrorism. And since 2011, South Korea and the U.S. have conducted annual drills to prepare for possible chemical or bioattacks. That’s still not enough, Weber said; however, he did say he sees some rays of light.

“We’ve made a lot of progress, but clearly there’s a long way to go,” Weber said. He suggested more drills, more vaccines and antibiotics for civilians, more detection systems that identify attacks, more biodefense research and more training for health care workers so they can identify bioattack symptoms early on.

“It’s hard for lawmakers to appropriate funds for rare events like [bioterror attacks],” he added. “It’s easier, quite frankly, to spend money on tanks and traditional weapons systems than it is to invest in new medicines and new diagnostics.”

As North Korea continues to lob threats, Seoul, South Korea, is carrying on with business as usual for now. But in a time when relations between North Korea and the U.S. are increasingly strained, diplomacy is seen as the better solution.

“All weapons of mass destruction are pretty bad news,” Hanham said. “The trick is also to convince North Korea not to use them in the first place.”