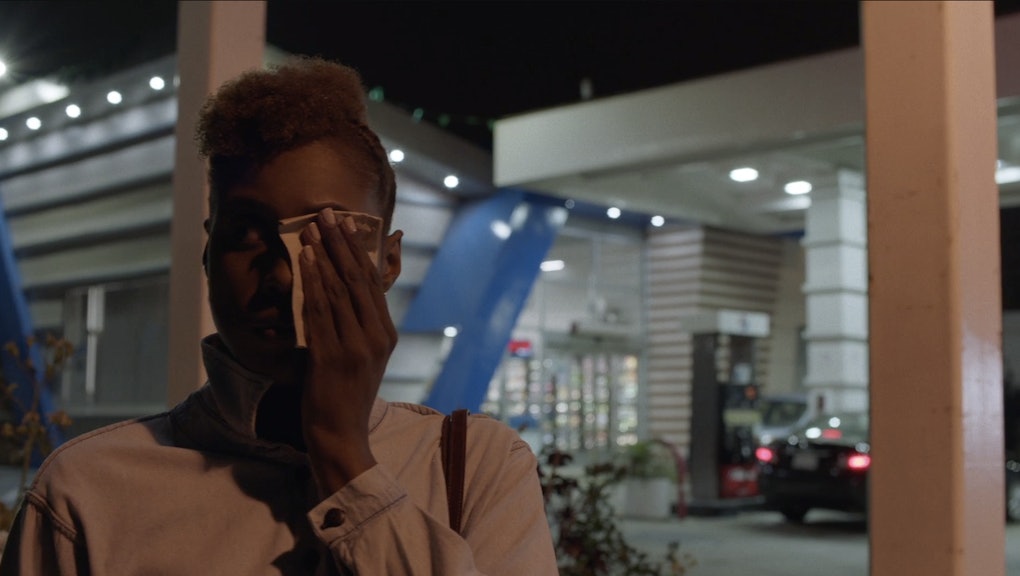 Why is there suddenly so much semen on TV?

We’d seen flashes of it arc abstractly across our sets in recent past. Sex and the City’s stoic Miranda got more than she bargained for while observing a tantric-massage workshop in a 1999 episode of Sex and the City; eight years later, viewers witnessed Adam Scott’s stunt dick runneth over on HBO’s short-lived Tell Me You Love Me. (It should be noted that, also in 2007, Showtime’s Californication — which had so often been harangued for objectifying women — zoomed in on one of its male protagonists getting nearly blinded by spontaneous female discharge.)

But a 2013 scene in Lena Dunham’s polarizing millennial dramedy Girls, from an episode directed and co-written by Dunham herself, served as something of a watershed moment for cable climaxes. In “On All Fours,” Adam Driver’s Adam finishes without permission across the chest of Shiri Appleby’s Natalia. It speaks muted volumes about Adam’s need to regain control following his breakup with Dunham’s Hannah, and expedites Adam and Natalia’s parting of ways. It also cannily coincided with peak TV’s flouting of convention, empowering shows as far-ranging in tone as Starz’s voyeuristic drama The Girlfriend Experience, HBO’s buzzy comedy Insecure and Netflix’s outlandish cartoon hormone-fest Big Mouth to broadcast sex as the literal and figurative mess it tends to be.

“Sex was never glamorous — it doesn’t mean it can’t be fun, but it’s not supposed to be pretty,” Logan Levkoff, a sexuality educator and author of Got Teens?: The Doctor Moms’ Guide to Sexuality, Social Media and Other Adolescent Realities, said. “To pretend Adam Driver’s character [had sex] well all the time wouldn’t be authentic to who he was, let alone to the audience.”

From Levkoff’s perspective, this particular taboo against depicting semen has persisted thanks to our culture’s ongoing, paradoxical discomfort with discussing anatomy at its most fundamental level. “One of the challenges we have with sexuality and bodies is we don’t ever talk about the fact that bodies secrete fluids other than shit or urine,” she said in a recent phone conversation. “How do we depict sex if we pretend like [ejaculation] doesn’t happen?”

And there really is little beyond our tolerance and showrunners’ imaginations preventing these kinds of images from becoming more commonplace. The Federal Communications Commission, which — per its mission statement — “regulates interstate and international communications by radio, television, wire, satellite and cable in all 50 states, the District of Columbia and U.S. territories,” declined to comment on this story. They instead referred us to an FAQ outlining that the FCC does not enforce its indecency and profanity prohibitions against subscription programmers like HBO or Netflix.

“If a 9-year-old is sitting and watching ‘Insecure’ or ‘Girls’ or ‘The Deuce,’ there are other family dynamics going on at home.” — Logan Levkoff

It could also be an urgent bit of one-upmanship aimed at provocative basic-cable tastemakers a la FX and AMC, whose relationship with advertisers prohibits them from pushing this particular envelope (for now). According to Beth Johnson, associate professor in Film and Media at the University of Leeds in the U.K., and co-editor of Television, Sex and Society: Analyzing Contemporary Representations, a carefully situated bit of male matter is “a way to mark out premium cable from ‘regular’ television.” In a lengthy email exchange, she described the subscriber networks as being “able to foreground this type of content as different and market it as cutting edge. As such, it can act both to sexually titillate and/or to titillate the mind.”

Johnson elaborated that it’s “important to look at the individual examples to think about and through the politics of why that image is in that program. In Girls, it could be argued that such an image sits not only as a marker of authenticity of pleasure, but that it is also employed because television as a medium has, over the years, positioned women’s bodies as sexual objects. The male climax in Girls could be understood as an equaling up, the same sort of exposure that women’s bodies have been subjected to for years. Or it could be argued that [it’s] used to show its viewers that they are trusted to see such sights in the context of a complex narrative.”

“While the scenes we’re talking about obviously depict a male bodily function, they’re also almost always told from the perspective of the woman showing her anger, humiliation or disgust and subverting the pornographic male fantasy of the money shot,” Los Angeles Times writer and entertainment reporter Meredith Blake noted in an email interview. She added that this new dynamic has affected a shift in how male writers approach sex scenes, citing an early season sequence in HBO’s David Simon vehicle The Deuce in which cum on the face of prostitute/porn actress Eileen (played by Maggie Gyllenhaal, a producer on the series) is revealed to be a prop — potato soup, “about the unsexiest thing in the world,” in Blake’s estimation.

The risk in risqué material for its own sake is, as ever, sounding an alarm for watchdog groups. The Parents Television Council, a nonpartisan education organization advocating responsible entertainment, is already closely monitoring Big Mouth, the X-rated riff on adolescence that not only renders a mortified preteen’s spasmodic, animated ejaculation, but also includes an underwater dialogue between he and his evacuated sperm. In a recent blog post on PTC’s website, moms and dads were cautioned that Big Mouth deploys “frequent use of the ‘F-word,’ and deals in graphic and explicit terms with genitalia, menstruation, ‘nocturnal emissions’ and more.”

“We’ve seen graphic sexual content and other kinds of adult content found on premium cable shows eventually be shown on basic cable, making any trend with regard to sexual content on premium cable very concerning,” Henson said in an interview, though she did not cite a specific example. (It should be noted that series like The Sopranos, as one example, have been heavily edited for language and nudity in syndication.) As Henson sees, it, “the more this kind of content creeps from premium cable to basic cable, or even to broadcast, means that more children will have access to what is clearly content designed for adults.”

This kicks up a debate about access and parental supervision and controls that, for some, is wearying. “Children always see things you don’t want them to see,” Levkoff, the sexuality educator and author, said. “That’s not new. We have obligations as parents [and] caregivers to tell young people, especially of the age of puberty, that ejaculate comes out of penises, and that’s OK and that’s supposed to happen.” Plus, she said, “if a 9-year-old is sitting and watching Insecure or Girls or The Deuce, there are other family dynamics going on at home.”

Martha Kempner, a sexual-health expert and co-author of 50 Great Myths of Human Sexuality, agreed in a recent phone conversation. “The onus is not on the producers of the content at this point to prevent quote-unquote people who shouldn’t be seeing it from seeing it,” Kempner said. “If we’re talking about kids, then the onus is on parents, obviously. And if we’re talking about adults, then they’re adults. I don’t think there’s any point in censoring it.”

It appears, then, that we should grow accustomed to the sights and sounds of spilled fluids — along with all of their attendant vulnerabilities — alongside our Sunday-night TV slate and binging regimens of gratuitous violence and prolific profanity. By no means is this the final frontier in tearing down similar taboos. The rush of simulated ejaculate has largely occurred in heteronormative contexts, and as Levkoff said, “We’re still afraid of women and their periods.” (Big Mouth, at least, doesn’t subscribe to that fear.) But to some, this marks progress.

And to all those opposed, Kempner offered that, historically, “the genie always comes further out of the bottle. You can’t ever really put the genie back in.” Especially when you’ve already pulled out.