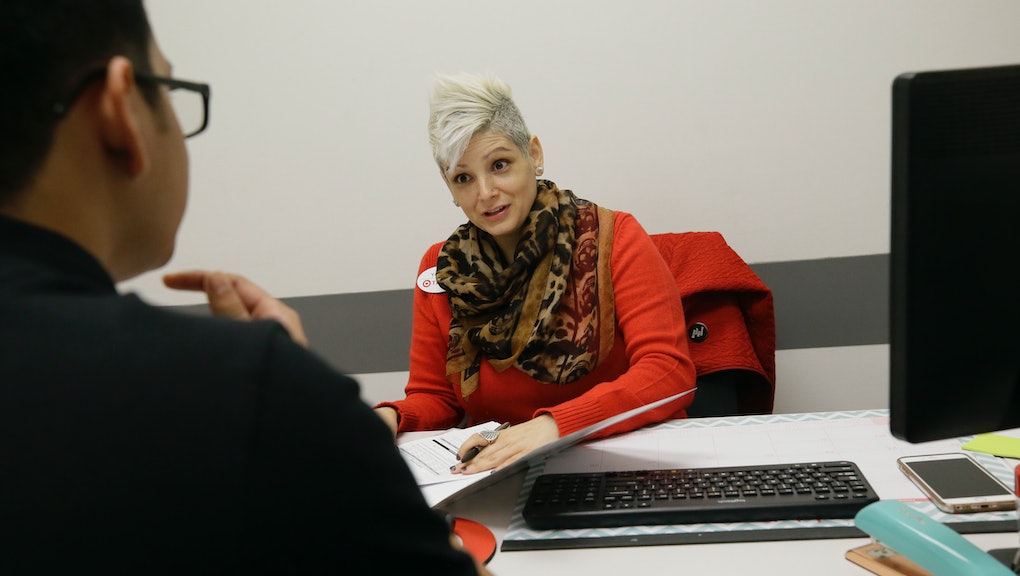 Women aren’t advancing because of inherent workplace bias, according to study

Dr. Ben Waber first revealed his plan to help organizations track their employees’ every move in 2016 with his company Humanyze. It was then that Waber unveiled his tiny, ID badge-sized device that would soon track every conversation, movement and working hour of an employee’s day via a built-in microphone, accelerometer, bluetooth and infrared sensor to track where the user faces when speaking.

And while the prospect of bosses and managers tracking our daily lives sounds creepy (even Waber admitted as much), his device is already providing invaluable information for companies, especially for women.

In a new study published in the Harvard Business Review by Waber, Laura Freeman, a data analyst with Humanyze, and Stephen Turban, a recent Harvard grad and former Humanyze data scientist, the team found that men and women behave exactly the same in the workplace, get exactly the same amount done in a day and spend exactly the same amount of time at face-to-face meetings with their superiors. So why then is it that women only make up 4% of Fortune 500 CEO’s, still make about 80 cents on the dollar compared to a man in similar roles and are still far, far less likely to receive a promotion than their male counterparts? According to Waber, it all comes down to simple gender bias.

“Gender inequality is due to bias, not differences in behavior,” the team wrote.

In total, the team noticed no discernible difference between the men and women they tracked for four months at an unnamed company that would lead to such a wide disparity between men and women moving up the corporate ladder.

“... As we analyzed our data, we found almost no perceptible differences in the behavior of men and women,” the team wrote. It add that women at the company all had the same number of contacts as their male colleagues, spent as much time with senior leadership as men, and allocated just as much time to their workplace tasks as men and that the men and women had statistically identical performance evaluations. Yet women weren’t advancing and men were. So what gives?

“Gender inequality is due to bias, not differences in behavior.”

“Our data implies that gender differences may lie not in how women act but in how people perceive their actions,” the team said. “For example, consider female mentorship programs that try to connect high-potential women with management. If women talk to leadership at similar rates as men, then the problem isn’t lack of access but how those conversations are viewed.”

So how then can companies change their ways? According to Waber and his team, the battle will be won when gender bias is done.

“While programs aimed at strengthening women’s leadership skills are valuable, companies also need to focus on the more fundamental — and more difficult — problem of reducing bias,” the team wrote. “This means trying bias-reduction programs, but also developing policies that explicitly level the playing field. One way to do so is to make promotions and hiring more equal.”

The team then pointed to a 2013 study showing a rather easy fix for gender bias in hiring. The study, conducted by scholars at Harvard’s Kennedy School of Government and Harvard Business School, showed that when a hiring managers simply consider multiple candidates at once, rather than one at a time, gender bias appears to go away.

Think of it this way, “If you see one pair of shoes in a store, it’s very hard for you to know how this pair compares in terms of quality or price or color. You base your judgment on whatever comes to mind,” Iris Bohnet, the study’s co-author and dean of public policy at the Harvard Kennedy School, told the Wall Street Journal. “But when you have different shoes available, all of a sudden you can calibrate the color and quality better.”

“Our data implies that gender differences may lie not in how women act but in how people perceive their actions.”

Another way to combat bias? With data like this.

“Companies need to approach gender inequality as they would any business problem: with hard data,” the team wrote, noting that most gender inequality programs were created because of anecdotal evidence, rather than data.

The data, the team says, can help companies figure out and understand why women aren’t excelling in the workplace, why they are leaving and what limitations it may be placing on its female workforce.

“When organizations implement a solution, they need to measure the outcomes of both behavior and advancement in the office,” the team concluded. “Only then can they transition from the debate about the causes of gender inequality (bias versus behavior) and advance to the needed stage of a solution.”

And sure, they may be simply trying to sell their product solution to more companies, but if cold hard data helps end the gender wage gap, then maybe it’s time for more organizations to buy in.