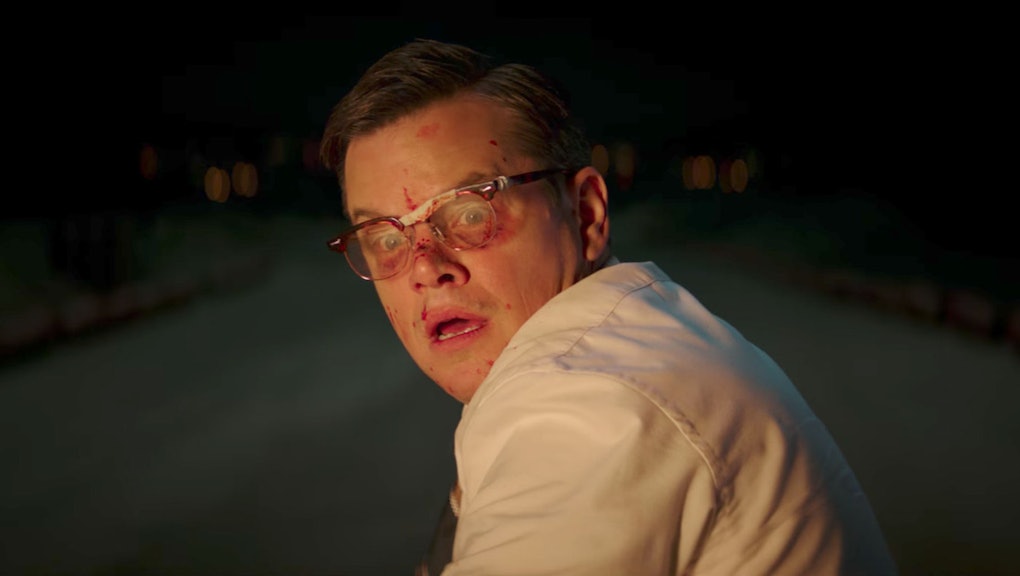 Well, at least George Clooney tried. With Suburbicon, Clooney once again assumes the role of director, this time taking on a long-dormant Coen brothers script and infusing it with a would-be progressive subplot about integration in mid-20th-century America. But that’s exactly the problem: Suburbicon feels like an outdated Coen brothers screenplay that had a side story surgically inserted inside. Critics certainly haven’t been shy about their feelings on the film; they’ve come at it like Charlie Meadows in the Coens’ Barton Fink, wielding a shotgun and igniting hellish flames all about.

Out Friday, the movie follows a series of crimes that take place in a cookie-cutter 1950s American suburb called Suburbicon. Our protagonist is Gardner Lodge (Matt Damon), an average Joe finance executive who — like so many Coen characters before him — is in over his head with some bad men (think Jerry Lundegaard from 1996’s Fargo). He has some kinky sex habits (like Harry Pfarrer, from 2008’s Burn After Reading). And, over the course of the film, his life is consumed with violence so over the top it plays for laughs (like in virtually every Coen brothers movie).

The Coens actually wrote the Suburbicon screenplay in 1986, just after they made their first film, 1984’s Blood Simple. But Clooney and his longtime writing partner, Grant Heslov, reportedly rewrote that old script to include a story about a black family breaking a color barrier in suburban America. (Joel and Ethan Coen retain a writing credit on the screenplay for Suburbicon, alongside Clooney and Heslov.)

The added narrative came from a separate project Clooney and Heslov had been working on that focused on William and Daisy Myers, the real-life couple who were the first black residents of Levittown, Pennsylvania, in 1957. The Myers’ move was met with discrimination, hostility and violent racial unrest that punctured the town’s idyllic white fantasy and exposed the insidiousness behind its quaint façade.

Clooney and Heslov decided to tell the Myers’ story by making them the Mayers (played by Leith M. Burke and Karimah Westbrook), the Lodges’ new backyard neighbors who are introduced at the start of the film.

When they first move in, Gardner’s 11-year-old son, Nicky (Noah Jupe), begrudgingly plays catch with the Mayers’ son Andy (Tony Espinosa). Despite Nicky’s reluctance, the two boys become friends as their worlds cave in. Nicky’s mom dies when two mob stooges (played by Glenn Fleshler and Alex Hassell) break into their house one night and tie up and chloroform the family. Andy and his family, meanwhile, face daily harassment from mobs of white racists who gather outside their house to bang pots and holler.

It makes sense on an intellectual level why Clooney would add the Mayers’ story into Suburbicon. Both stories take place in the same sort of setting and you can imagine what he was aiming to show by juxtaposing these two threads. A white family is embroiled in murder and fraud, its patriarch literally walking the streets coated in blood, and it all goes unnoticed because the community’s too preoccupied with a black family that’s simply living.

But as Clooney cuts from the Lodge drama to the Mayers’ struggle again and again, it seems as though the two narratives are bound to collide. But aside from a conveniently timed accident involving a firetruck and a second game of catch between the two boys, they don’t. So what winds up happening is the Mayers’ story takes the viewer out of the primary plot but offers no real payoff. And the Coen-crafted crime yarn ends up losing some of its weight; it feels trivial in the shadow of what’s happening next door.

At points, I found myself wishing the Mayers’ story was foregrounded rather than the Lodges’ story — or better yet, that Clooney and Heslov had just made the Myers movie that they had been working on. But then again, a black integration story isn’t one that a couple of white dudes are best positioned to tell. They prove that by rendering the racial drama in broad, surface-level strokes — an angry crowd, denial of service at the supermarket, resigned perseverance.

It seems clear that Clooney had the best intentions, but instead of delivering a message that resonates, he’s ended up with a convoluted movie that feels like a Coen brothers knock-off. The irony of Suburbicon — and the reason it doesn’t hit the mark — is that it’s a film that takes aim at insularity but that also feels insular, unable or unwilling to go beyond surface-level representations of the people living next door.