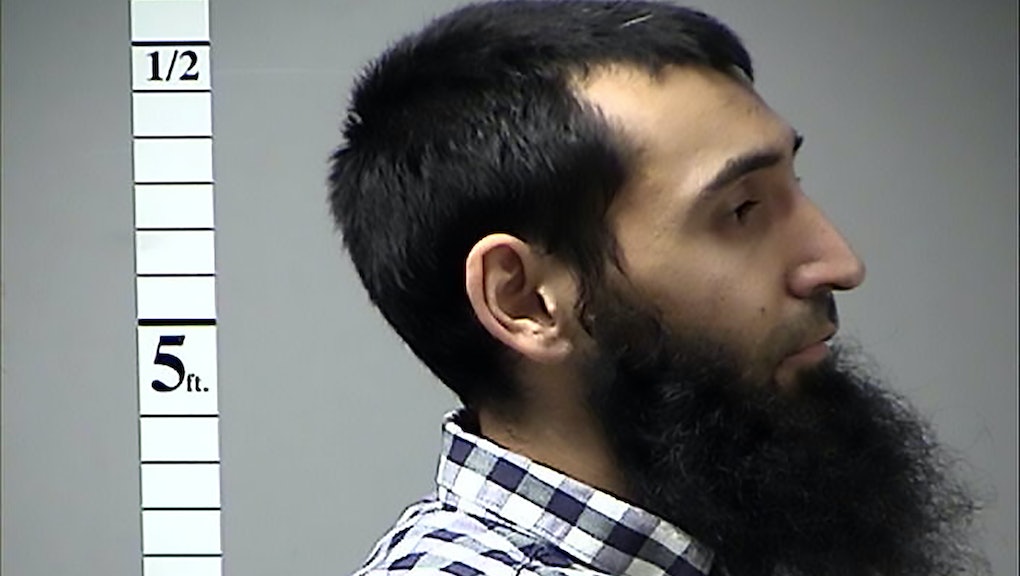 Within the first few hours of a deadly attack on pedestrians in New York City on Tuesday, police officials used “Middle Eastern” to describe a suspected culprit. Several media outlets quickly parroted that description, until it was revealed that the suspect isn’t from any of the nearly two dozen countries that make up that region.

Police identified Sayfullo Saipov as the suspect who drove onto a bike path in lower Manhattan and struck more than a dozen people. The 29-year-old male is reportedly from Tampa, Florida, but had been living in Paterson, New Jersey. He is said to have immigrated from Uzbekistan, a central Asian nation, in 2010, and may have been radicalized in the United States. Tuesday’s attack left eight dead and several others injured. Mayor Bill de Blasio described it as an “act of terror.”

Ultimately, the descriptor “Middle Eastern” is as useless for Saipov as describing Stephen Paddock, the white shooter who killed 58 people and injured hundreds of others at a Las Vegas concert in October, as Nevadan, immigration advocate Murad Awawdeh said.

“What we’re seeing is that literally the word ‘terrorism’ is only being used to describe incidents when the person is perceived to be Muslim,” Awawdeh, vice president of advocacy at the New York Immigration Coalition, said in a phone interview on Wednesday. “Not only does it create a breeding ground for hate, it demonizes and puts a target on the backs of people who are perceived to be Muslim.”

In the aftermath of the Sept. 11 terror attacks, Muslims, Sikhs and other people who may “fit the description” of alleged terror suspects increasingly became the targets and victims of hate crimes as a result of dangerous stereotyping by media and political leaders, Awawdeh said.

That trend continues today — reported bias crimes against Muslims spiked after the election of President Donald Trump, who promised to curtail Muslim travel and immigration to the United States as a matter of national security. For advocates, the hope is that getting leaders to stop peddling harmful rhetoric will result in a less ignorant populous and a safer existence for Arab and Muslim communities that have been targeted.

“We work every day to build mutual understanding, tolerance and inclusiveness in our society,” Ibrahim Hooper, national spokesman for the civil rights group Council on American-Islamic Relations, said in a phone interview Wednesday. “These kinds of horrific crimes take us back to prior from where we even started. It’s really something that we have to deal with.”

That history goes back more than 20 years. Following the 1995 bombing of the Alfred P. Murrah Federal Building in Oklahoma City, that killed 168 people, the suspects were initially described as “Middle Eastern.” Timothy McVeigh, a white man who was born and raised in New York, was later convicted and executed for detonating the bomb. Two other white men were convicted as co-conspirators.

Sikhs, who are frequently mistaken by assailants as Muslim, have also been targets of anti-Islamic hatred. In 2012, Wade Michael Page, a purported white supremacist, gunned down six people and injured four others at a Sikh temple in Oak Creek, Wisconsin.

There are 22 countries in the Middle East and North Africa region, where Islam is a predominant religion. But Christians also live freely and openly practice their faith in the region, among diverse populations that speak multiple languages.

But these distinctions have often been lost on political leaders. Trump also mentioned the “Middle East,” in a series of tweets about the attack.

Days after taking the oath of office, Trump signed an executive order that banned travel from several Muslim-majority nations in the Middle East and North Africa — the list of nations excludes Saipov’s native Uzbekistan. Even as federal courts thrice blocked enforcement of the so-called Muslim ban, the impact of the president’s rhetoric had already led to increased victimization of Muslim and “Muslim-looking” people.

Reported anti-Muslim hate crimes increased 91% within the first six months of 2017, compared to the same time period in 2016, according to a report from the Council on American-Islamic Relations. There were 35 anti-mosque incidents in the United States just in the first three months of the year, CAIR said in March. In June, the U.S. Justice Department, under Attorney General Jeff Sessions, brought hate crime charges against a man accused of burning a mosque. That’s just a peek into the dangers within Arab, Muslim and Middle Eastern communities, advocates have said.

Abed Ayoub, legal and policy affairs director of the American-Arab Anti-Discrimination Committee in Washington, D.C., said curbing Islamophobic and xenophobic attacks in the United States starts with leaders setting and maintaining a tone of acceptance.

“The stereotyping and the hate and the bigotry will stop when the tone changes from the people up top — from politicians, such as our president, and from Fox News and other media outlets,” Ayoub said.

“They’re peddling hate; they’re peddling fear, to their benefit. When they stop doing this, then we will see an end to the generalization, the bigotry, hate and discrimination toward the Arab and Muslim community. It is possible.”