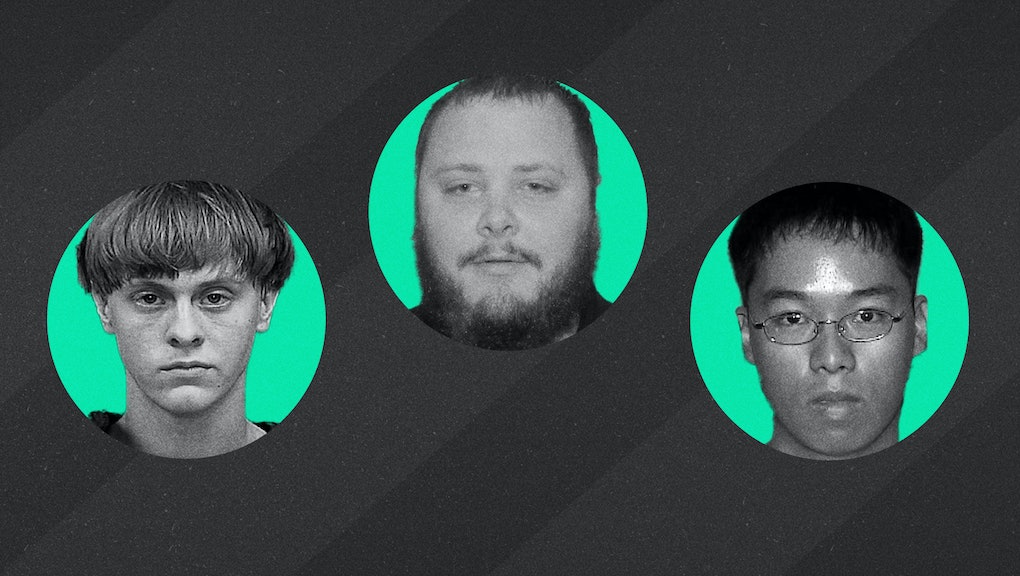 These three mass shooters “slipped through the cracks.” It cost 67 people their lives.

Each of these men managed to legally purchase a firearm, even though they all checked off at least one of the Bureau of Alcohol, Tobacco, Firearms and Explosives’ boxes for people prohibited from purchasing a gun.

However, instead of being flagged in a system that could have stopped them, Kelley, Roof and Cho were each able to walk out of a store and walk into two churches and a school and kill 67 innocent people — all because of clerical error and a backup of paperwork.

According to the ATF, these are the 10 reasons why a person living in the United States would be prohibited from buying a gun from a licensed dealer:

— who is a fugitive from justice;

For the most part, authorities are successful in weeding out people who should and should not purchase guns per the law. As Yahoo reported, between 1998 and 2010 the Justice Department rejected 2.1 million of 118 million gun applications for failing to meet the above guidelines. Most of the rejections came from people with felony convictions who tried to purchase a gun. But as the men above prove, the background check system still has very big shortcomings, specifically because of what is known as the “default proceed.”

Take, for example, the case of Kelley.

Kelley was court-martialed during his time in the U.S. Air Force for assaulting his then-wife and stepson. In 2012, he escaped from a mental health institution and served a year in confinement, which should have been enough to legally stop him from purchasing the rifle and two handguns he used to kill 26 people in a small town Baptist church.

Sadly, it didn’t, because the Air Force failed to add the appropriate paperwork to the federal system.

The same was the case for Roof.

According to the Washington Post, on April 13, 2015, an FBI examiner at the bureau’s West Virginia headquarters received a request to look into a gun-buyer who was attempting to purchase a .45-caliber Glock pistol.

The examiner had to determine if Roof was legally allowed to purchase a gun or not because of his drug possession arrest on Feb. 28, 2015. However, the documents she needed to examine to determine his eligibility were missing from his file. Because she could not ascertain his guilt or innocence within the three-day waiting period, Roof was able to come back, legally pick up the weapon and later murder nine people inside the Charleston’s Emanuel AME church because of the default proceed.

“If you go to a licensed gun dealer to make a gun purchase, they can contact the [National Instant Criminal Background Check System] electronically and normally, for a typical person, that information is cleared within a few minutes,” Robert Spitzer, author of The Right to Bear Arms, professor and gun control expert, explained to Mic. “But the window of time for completing the check is 72 hours.”

As Spitzer added, if, after 72 hours, no information comes back on the person looking to purchase a gun, then the seller can legally use their own discretion to decide if they want to sell the person a gun.

According to the FBI, “A ‘Delayed’ response to the Federal Firearms Licensee indicates that the firearm transfer should not proceed pending receipt of a follow-up ‘Proceed’ response from the NICS or the expiration of three business days (exclusive of the day on which the query is made), whichever occurs first.”

However, as Spitzer pointed out, this system often fails.

“There has been an examination of the cases of people where no information came back after 72 hours. And it turns out a great many of them were people who in fact, do have problems in their background that should have disqualified them,” he said. “So that’s a loophole, that’s a problem in the system for sure.”

Indeed, the same default proceed was used for Cho, who was declared to be a danger to himself in late 2005 by a Virginia court and involuntarily admitted to psychiatric treatment. However, he still obtained two guns and killed 32 people on the Virginia Tech campus in 2007.

As EveryTown explained, the delayed rule or default proceed, which was added to the 1993 Brady Bill, has allowed gun dealers to move forward with more than 15,000 gun sales to prohibited people between 2010-2014 because their background check could not be completed within the 72-hour window.

Moreover, a 2009 study by Mayors Against Illegal Guns found that sales of guns using the default proceed are eight times more likely to involve a prohibited purchaser than sales with background checks that are resolved within 72 hours.

“If you or I if came into possession of a gun, we could sell it on Craigslist, at a gun show, through a classified ad, you could go to your next door neighbor and knock on the door and say, ‘You want to buy a gun? Here ,I’ll give it to you.’ That’s not illegal.”

The easiest fix? As Spitzer said, just reverse the default.

“You could set the default the other way, which is that if you’re not cleared, you cannot get the gun until you get clearance,” he said. Spitzer, however, isn’t confident even a discussion around that change can even happen until “the Democratic Party gains back control of one or both houses of Congress.”

As for a state Spitzer would turn to as a representation of sensible, middle ground gun laws, he said it’s all about New York.

“If you want to get a pistol permit or you want to own a handgun in New York State, it’s much more than simply going through the federal NICS background check process,” Spitzer said, adding that he has gone through the purchasing process himself.

According to Spitzer, a potential gun-purchaser will submit an application along with the names of four character references to local police or the state or the county sheriffs. The police will then contact the references and are free to contact the buyer’s family and friends to ask if they believe the purchaser should be able to buy a gun.

“In New York State ... police have a lot more discretion to ask around to gather information,” he said.

Finally, a county judge in New York will make the ultimate determination as to whether a person is entitled to have a pistol permit. “There’s better checking that goes on in New York state than there is in most states,” Spitzer said.

And Spitzer isn’t alone in thinking that more sensible gun laws and better background checks are needed in the United States. As a Pew Research Survey found, nearly 30% of gun-owners want stricter gun laws in this county, while a majority of Americans, 52%, say they want to see stricter gun laws.

“We do a poor job of gathering information. States vary widely in their reporting practices. And all of that stuff contributes to the larger problem,” Spitzer added.

But even fixing the default loophole may not be enough, because purchasers don’t always buy through a federally-licensed gun dealer to buy their weapons.

“You don’t have to be a federally licensed gun dealer to sell a gun,” Adam Winkler, constitutional law professor at UCLA, told Mic. “If you or I if came into possession of a gun, we could sell it on Craigslist, at a gun show, through a classified ad, or you could go to your next door neighbor and knock on the door and say, ‘You want to buy a gun? Here, I’ll give it to you.’ That’s not illegal.”

As Winkler explained, this is what’s known as the gun show loophole. What may help close this loophole, Winkler noted, is adopting universal background checks, which is something states like California have already done.

“You can’t sell a gun to someone without going to a gun store and running a background check. And we’ve seen other states adopt similar laws. The state of Washington recently has adopted universal background checks.”

As Winkler stressed, all Americans “have a constitutional right to bear arms.” And as he astutely added, even if we did not have such a right, there are simply “too many guns out there for the government to ever realistically take them away.”