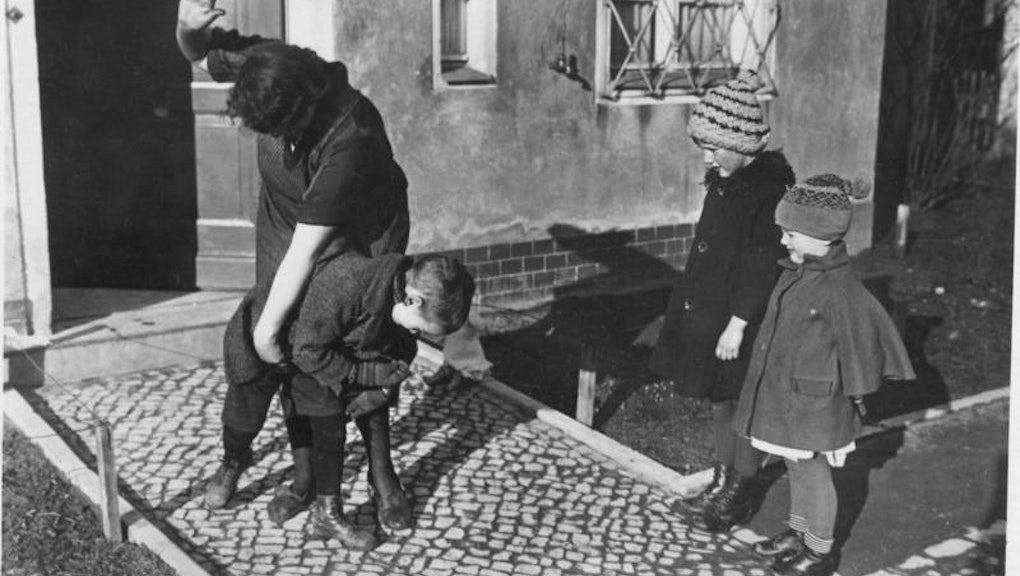 Americans have always hit their kids. Now, the majority of research says it’s time to stop.

In the U.S., more than 160,000 school children were beaten with a paddle during the 2013-2014 academic year. It was 50% more likely to happen to black children or kids with disabilities. Nineteen states still allow physical punishment in schools and, in 2012, more than 70% of Americans agreed that it is sometimes necessary to give a child a “good, hard spanking.” The United States is the only country in the United Nations that hasn’t ratified the 1989 U.N. Convention on the Rights of the Child.

Why? Probably because Article 19 says that children must be protected from “all forms of physical or mental violence.”

Research says it needs to stop.

The truth is, Americans are very much in favor of spanking. That’s despite decades of strong evidence that it puts kids at risk for serious psychological and developmental issues, and with no real silver lining.

“At times, it doesn’t have any effect, but it never has a positive effect,” Elisa Romano, a professor at the University of Ottawa School of Psychology in Canada, said by phone. “Research shows that the only positive effect is immediate compliance,” she added. In addition to aggressive and antisocial behavior, studies have associated spanking with depression, potential damage to learning and memory skills and reduced gray matter of the brain in cases of particularly harsh punishment.

Corporal punishment has long roots in American history, and it can also vary widely in its severity. There’s the more socially-accepted butt-swatting in the 1960 novel To Kill a Mockingbird, but also punishments that venture in the area of classic abuse, such as the brutal canings referenced in classical American literature, like Charles Dickens’ 1861 book, Great Expectations.

That’s the first line of argument from many people who advocate for spanking: It’s an age-old tactic, and there’s a difference between hitting for punishment and abuse. But the majority of research says that argument doesn’t add up.

To look at a baseline of potential harm, one 2016 paper reviewed 50 years of research on one of the most mild and common form of spanking — hitting children on the rear or limbs with the palm of a hand. The meta analysis found that all of the included studies linked spanking to negative results, its collective sample size accounting for more than 160,000 kids.

“If you look at those studies — every one of them that examines the relationship between corporal punishment and aggression, hyperactivity, or antisocial behavior — you will see that the more kids are hit, the more behavioral problems they have,” Joan Durrant, a professor at the University of Manitoba’s Department of Community Health Sciences, said by phone. “It’s so clear that it’s not debatable.”

Still, the pro-spanking crowd is strong.

Here’s the thing: Contrary to all the overwhelming evidence, there still is a debate about spanking in the United States. Some of that, experts say, is rooted in a subgroup of Conservative-Christian thinking that touts modernized phrases like “spare the rod and spoil the child,” which derives from a passage in the Old Testament. Others may say that they were hit as kids and they turned out fine. Then there’s the argument that kids these days lack a respect for authority, an adulthood gripe that has existed since ancient times (Plato allegedly complained about children’s “bad manners” and “disrespect for elders” before his death around 404 BCE).

But when it comes to “promoting healthy child development,” Durrant says it’s hard for those arguments to add up.

“Why they’re not willing to face the scientific fact that hitting children has only detrimental outcomes — why that logic is so hard for them to grasp — is difficult to understand,” she said. “If somebody hits me, I feel terrible. And the impact of that? It might make me do what the person told me to do because I’m scared, but it has put a wall between me and that person … Why we think children are any different is a mystery.”

The standstill is palpable, with one recently-published paper from September 2017 titled, “Moving research beyond the spanking debate.” It essentially calls for physical punishment of children to be seen as a “human rights” and “public health” problem. That’s how Sweden — the first of 53 nations to outlaw physical punishment in 1979 — saw it, after all.

“They didn’t wait for 75 studies. They just recognized that hitting people has no positive outcomes. I spent a lot of time there studying the impact,” Durrant said. “Since then, Sweden is always near or at the top of the list of OECD [Organisation for Economic Cooperation and Development] countries on the measure of child health and well-being … Kids are less likely to be involved in crime, the suicide rate has declined and the rate of reporting violence against children increased — but the rate of persecution hasn’t changed.”

Yet even the effectiveness of Sweden’s spanking ban along with the harms of mild physical punishment is contested by a small cohort academics. Durrant, however, argues that some of that research is poorly conducted or skewed — and Kevin Harris, a psychologist who co-wrote a 2017 paper which concluded that spanking “can be a useful tool,” said that anti-spanking research certainly overwhelms pro-spanking studies.

“You’re going to have a lot harder of a time finding evidence to support that [spanking] is a good thing. We only found a couple of articles that concluded spanking isn’t detrimental,” Harris, an assistant professor of psychology at the University of Texas Permian Basin, said by phone.

He also added that “pretty much all of the research on corporal punishment was about white people,” meaning there’s a “white bias in this research.”

The argument for a ban

The United States is far from banning physical punishments in homes, considering that several states still allow it in schools. Culturally, surveys suggest more than half — if not a majority — of Americans are for spanking, and millennials are no exception despite an overall decrease in numbers (one survey suggests that 94% of parents in the U.S. were pro-spanking in 1968).

But both Romano and Durrant believe that a ban could shape culture in the opposite direction and reduce the numbers — a feat that would protect thousands of children.

“It used to be that it was legal to hit your wife. That was considered an okay thing to do — even the right thing to do,” Durrant said. “But when the laws had changed, the attitudes of society changed. It reframes the behavior.”

Romano said that there must also be a “bottom-up method,” where parents are encouraged to try more “positive” methods of discipline.

“Usually, parents don’t hit their child out of hate. They’re doing it because they think it’s going to work,” she said. “But the research shows that hitting doesn’t work … And if we know that it’s not in the best interest of the children in terms of promoting their development, why wouldn’t we want to consider the alternatives?”