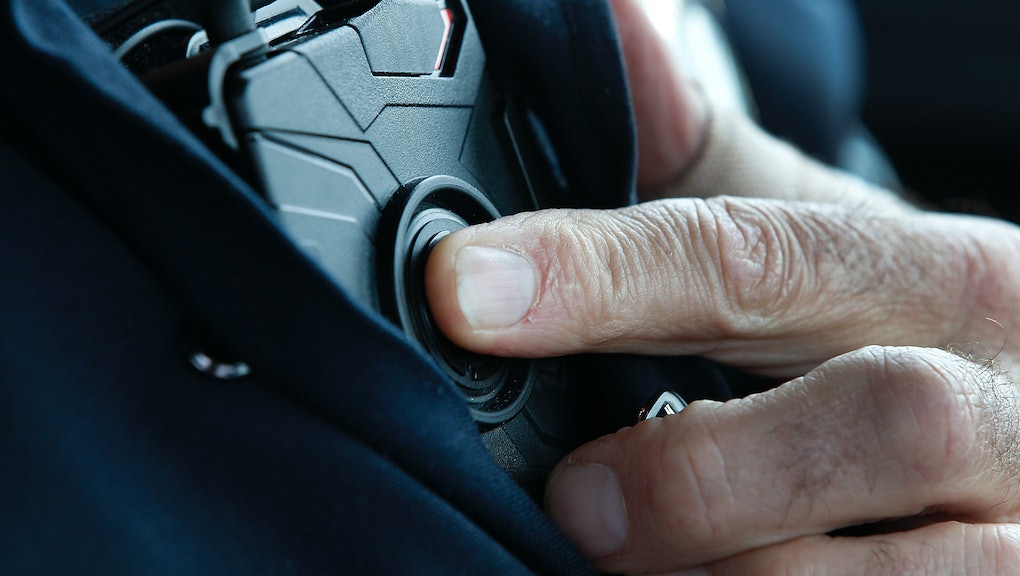 It’s been seven weeks since police in Topeka, Kansas, shot and killed 30-year-old Dominique White, and his loved ones still don’t know exactly what happened.

City officials representing the police have refused to let White’s parents view footage from an officer’s body camera that captured the fatal Sept. 28 encounter. The city’s attorneys have cited a state law enacted in March that only requires the local government to show the footage to White’s four young children, aged 3 to 13.

The city changed its tune Tuesday after attorneys for White’s parents complained in the press on Monday, agreeing to show the relevant footage to whichever adult is designated the “executor” of White’s estate.

“Once that person is established, they will be allowed to see the video,” Topeka assistant attorney Shelly Starr told Mic Tuesday. “We’re trying to follow the law.”

Allowing White’s family members or the public to see the body cam video of his death could unfairly sway public perception of what happened against the officers involved, according to Starr.

Police in Lawrence, Kansas, are conducting the criminal investigation into whether or not Topeka’s officers broke the law in killing White, Starr said.

“We don’t want to jeopardize that criminal investigation,” Starr added. “We want to make sure that’s a fair process.”

Police body camera programs were intended to show the public exactly what happened when officers kill civilians. Yet since 2015, many states and local police departments have created laws or regulations to prevent that from happening.

Kansas is one of 23 states that has a body cam open records law governing when and how body cam footage is released to the general public. In some cases these laws are passed simply to keep the public from hearing or viewing recordings of unrelated police conversations or to protect the privacy of citizens encountered in routine officer interactions, according to the American Civil Liberties Union.

“We don’t want the press having access to video of a guy having a bad day who is streaking naked down the street,” ACLU advocacy and policy counsel Chad Marlow told Mic Tuesday.

More often, however, police departments and legislatures are creating rules or passing laws to help officers avoid unwanted scrutiny when they are accused of criminal misconduct, according to Marlow — the exact opposite of what body cams were designed to do.

The common refrain is that releasing body cam footage would compromise an active criminal investigation, a frequently exercised exception to both federal and state Freedom Of Information Acts.

“In reality the police are hiding behind this exception,” Marlow said.

In May of 2015, the Barack Obama administration set aside $75 million to fund police body camera programs across the U.S. over the subsequent three years, believing it would help address the emerging crisis of ubiquitous police brutality and rampant officer-involved civilian deaths.

Since then, the LAPD has enacted rules that make it all but impossible for the public or the press to acquire access to body cam footage, which is released only at the discretion of the department or a judge.

One of the body cam videos seems to show an officer depositing a small plastic bag of a white substance into Shields’ wallet before pressing the record button on his Axon body cam.

Shields’ attorney, Steve Levine, told reporters the officer may not have realized the body cam saves the previous 30 seconds of footage it captured after the record button is pressed.

“When he turned on his cam, he didn’t know he was recording at that point,” the attorney said.

Reporters note in the video that the LAPD hasn’t willingly released any body cam videos since creating its body cam program in 2015.

California lawmakers gave $10 million to their Board of State and Community Corrections in 2015 to help local police departments across the state launch effective body camera programs, but state legislators have failed to pass a requirement for police departments to release body cam footage to the public.

Instead local law enforcement agencies who took the taxpayer money have been permitted to set their own rules, which often are negotiated with police unions that seek to keep videos from reaching the public almost entirely.

South Carolina became the first of five states to pass a law requiring police to wear body cameras after Walter Scott was fatally shot in the back in April of 2015. Then-Gov. Nikki Haley signed a body cam bill into law in June of the same year.

But that law also does not require police to grant public access to body cam footage, giving discretion to local departments thanks to lobbying efforts from the state ACLU and law enforcement officials, according to South Carolina Press Association lead attorney Taylor Smith.

“It was my view whenever you exempt video of public officials performing their duty, it’s designed to cover up their mistakes,” he added. “Law enforcement has the unfortunate habit of hiding everything it does from the people they’re supposed to be serving and protecting.”

Without more explicit advocacy from the press, local citizens and state lawmakers, body cam technology intended to help keep police in check may ultimately be used by police against citizens instead of the other way around, according to the ACLU.

“Whether or not body cameras are a tool for promoting police transparency and accountability or are nothing more than a new tool for additional police surveillance and propaganda depends entirely on whether people have public access,” Marlow said. “Right now state lawmakers seem to be far more concerned with getting a thumbs up from law enforcement lobbyists than providing transparency to the public.”