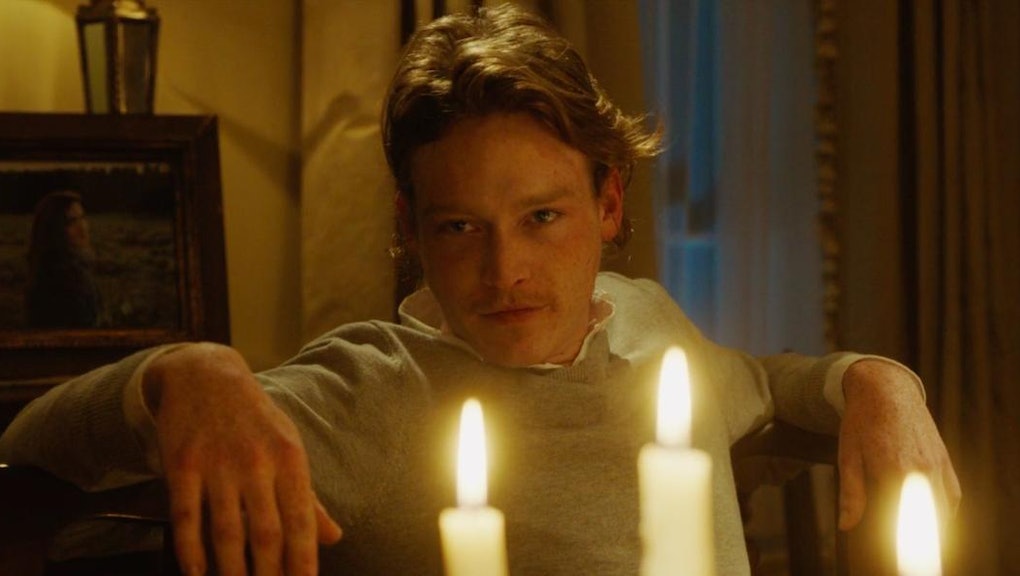 Caleb Landry Jones always seems to bite it. Across film and TV, the actor’s characters have been stabbed in the leg and stomped out (Get Out), burned to death (Heaven Knows What), blown up (American Made) and shot by their own hand (Twin Peaks: The Return). The central question in 2014’s God’s Pocket was how he died. And in his latest film, Martin McDonagh’s Three Billboards Outside Ebbing, Missouri (released in theaters Friday), Jones’ character is thrown out a window and then viciously and repeatedly kicked by a police officer.

In Three Billboards, Jones plays Red Welby, a small-town ad man who kicks the movie in motion by agreeing to sell Frances McDormand’s character, Mildred, three billboards at the edge of town. Mildred — a provocative, potty-mouthed, furious single mother — uses the billboards to call out the small town’s police chief, Willoughby (Woody Harrelson), for not catching the man who raped and killed her daughter several months earlier.

Given Jones’ tendency to play human punching bags, and the fact that some members of the force aren’t happy with Red for selling those billboards, it’s not exactly a surprise that he ends up hurtling through the air. But unlike with so many of Jones’ other characters, there’s no satisfaction in seeing Red get beat up.

Jones may not be a household name, but it’s been hard to miss him this year. He has a distinctive look — a ghostly face covered in freckles and topped in wispy red hair — and he’s shown up in several of the year’s marquee projects: two potential Oscar contenders in Get Out and The Florida Project; the most-hyped TV reboot of the year in Twin Peaks: The Return; arguably the most fun action movie of the year in Doug Liman’s American Made; and, now, a third picture that’s looking to be an awards-season favorite, Three Billboards. All of those performances have sneakily been some of the year’s most resonant.

At a time when America has had to reckon with pervasive white discontent, Jones has given that concept multiple faces. In three of his five roles this year (Get Out, Twin Peaks and American Made), Jones has played shades of rage: dumb rage, racist rage, demented rage, sometimes all three. There’s often something sinister and unsettling about him when he’s on-screen — a vibe that’s no doubt aided by his unusual voice and delivery.

In real life, the 27-year-old’s a southerner — originally from Garland, Texas — but he doesn’t speak in any sort of discernible accent (at least to my ears). Rather, his speech patterns are wholly unique, thanks to a lisp that’s somehow simultaneously high-pitched and guttural. In intense moments, Jones makes it seem like he might combust, by breathing through his mouth and choking on his words. He gets so he’s boiling, his freckled face inflamed, steam practically coming out of his ears. If a director used CGI to make his head pop, it wouldn’t seem like a stretch.

What’s so interesting about the different sorts of rage these characters embody is that the rage is often rooted in their whiteness. In Get Out, he plays a wealthy lax bro whose menacing and bigoted interrogation of Chris Washington (Daniel Kaluuya) is one of the first signs that Chris, who is black, is unsafe in his white girlfriend’s parents’ quaint suburban home. In Twin Peaks and American Made, he plays poor, down-and-out fools who are seemingly uneducated but still bristling with entitlement. His character in American Made, the brother-in-law of the drug-smuggling pilot Barry Seal (Tom Cruise), also has explicitly racist leanings: He uses a bag of money he steals from Seal to buy a souped-up coupe with a giant Confederate flag decal painted on it. The car doubly projects unrightful ownership.

In McDonagh’s film, though, Jones plays against type. Red is on the receiving end, rather than the giving end, of hate. He is, above all, decent — more in the mold of the downcast motel manager’s son he plays in The Florida Project. Red’s more of a good-hearted capitalist than an engaged activist: At the movie’s start, he’s not really comfortable with the message that Mildred’s sending, but he’s happy to collect her cash. But when the billboards cause a stir in Ebbing, Red refuses to take them down, despite the hell (and beating) he catches from a thickheaded, mama’s boy cop named Dixon, played brilliantly by Sam Rockwell. In this scenario, it’s Dixon who’s the racist, not Jones’ Red.

Jones’ performance as Red is tender. In the latter half of Three Billboards, after Dixon sends Red flying out that window, Dixon actually ends up in the same hospital room as Red, having being the victim of a separate crime. Dixon apologizes to Red for assaulting him, and at first, Red grows quietly angry. But then he reciprocates with a small but touching gesture.

There’s a line spoken by another character in the film, at another point, that acts as the movie’s ethos: “Anger just begets greater anger.” Red shows that the inverse is also true: Kindness begets greater kindness. If Jones’ other roles from this year interrogate and project white ire, then his turn as Red can be seen as a sort of antidote. As brilliant as Jones is at playing toxic, menacing characters, it’s equally exciting to see him, one of the most promising young actors working today, close a stellar professional year with a bit of redemption.