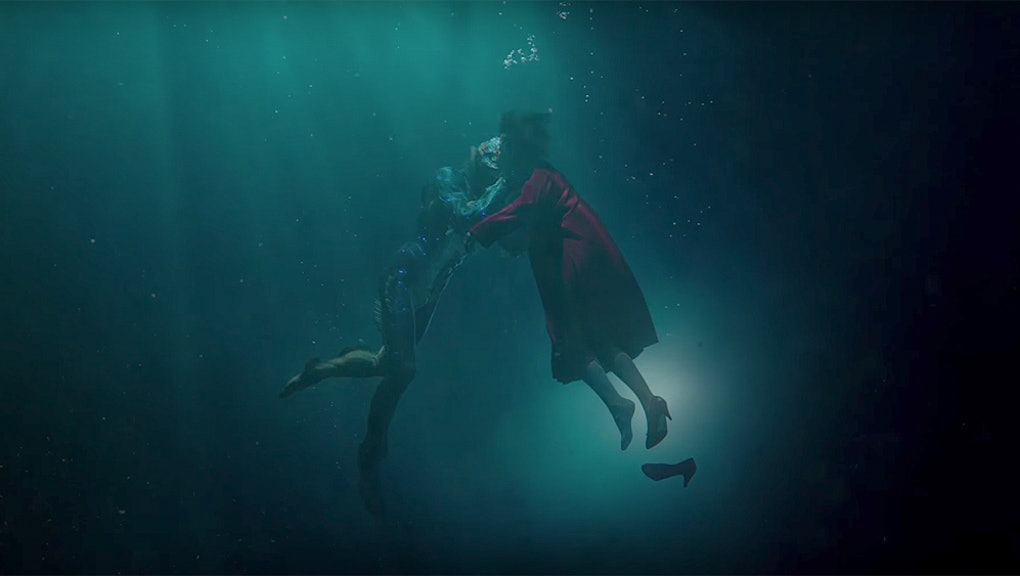 Guillermo del Toro’s newest film, The Shape of Water, which arrives in select theaters on Friday, doesn’t waste any time plunging the viewer into the mind of its main character. The submergence, in fact, is literal. Elisa (Sally Hawkins), a lonely mute who works as a custodian at a government lab, is asleep, floating in a teetering bedroom deep underwater, in an ocean that’s green and blue and punctured by bursts of amber sunlight.

It’s all clearly magical — the palette, Alexandre Desplat’s musical score, the weightlessness — so when the fantasy’s interrupted by the ringing of an alarm, it doesn’t feel like a surprise. The real twist comes when Elisa wakes and the atmosphere remains phantasmagoric: Elisa is in her bed in her pre-war apartment, but the colors and lighting are still lush and otherworldly.

OK, that the world of The Shape of Water is dreamlike may not be a twist for viewers familiar with del Toro’s work. The Mexican director’s greatest strength is his ability to imagine mystical worlds and bring them to life. (It’s no coincidence that in the trailer for the auteur’s earlier masterpiece, 2006’s Pan’s Labyrinth, the film is said to be from “the imagination of Guillermo del Toro” rather than simply, “A Guillermo del Toro Film.”)

But in The Shape of Water, del Toro’s imagination doubles as Elisa’s. Her life is, on its surface, dismal. The year is 1962, the place is Baltimore, and Elisa bares the double burden of being a woman and a mute. As a custodian, Elisa spends her days literally cleaning up other people’s messes; she clocks in and out, rides the city bus and subsists on a diet built around assembly-line cafeteria lunches. Her only two friends are her chatty colleague, Zelda (Octavia Spencer), and her nebbish roommate, Giles (Richard Jenkins). As a black woman and a gay man, they’re outcasts, too.

And yet, the way we see Elisa’s world is far from bleak or drab. Like so many downtrodden film protagonists before her, she’s a dreamer. The world before her is cast in shades of emerald and filled with poetry of motion, sound and color; everything appears orchestrated, all part of a grand production, of which she might imagine herself the star. Del Toro makes a marginalized character the center of the story, and Elisa sees beauty where others don’t. Namely, in a mythical sea creature that’s being examined — but mostly tortured — in the lab where she works.

The tormentor is security supervisor Strickland (Michael Shannon), a cruel alpha male, part of the same cinematic lineage as villains like Governor Ratcliffe (from Disney’s Pocahontas) and Colonel Miles Quaritch (from Avatar). He sees the amphibious creature (played by Doug Jones) as a potential product or weapon to be leveraged in the Cold War. He zaps it with an electric baton to assert his dominance and try to tame it. And when the creature attacks him, Elisa and Zelda are tasked with cleaning up the mess.

Unlike Strickland, Elisa is enchanted by the creature. She feeds it a hard-boiled egg, and when she signs at it, the creature appears to understand her. Later in the film, curiosity turns into courtship. After Elisa is done cleaning, she returns with more eggs and romantic jazz records. She acts tenderly — a strategy that, surprise, yields greater results than violence — and the merman reciprocates. It shows Elisa, who is ignored or harassed by most, the sort of intimate affection and attention that she doesn’t receive much elsewhere. She doesn’t see it as a monster and it doesn’t see her as a mute; neither reduces the other.

Without ever becoming convoluted or trite, The Shape of Water manages to be many things: a heist flick in which Elisa tries to free the creature, a love story, an allegory about white men trying to conquer what is exotic to them. But at its core, it’s a film about the basic desire to be seen. Elisa and the amphibian are both lonely souls who feel different — in their own ways — from everyone around them. But in the eyes of the other, the things that make them different don’t make them strange. They make them special.