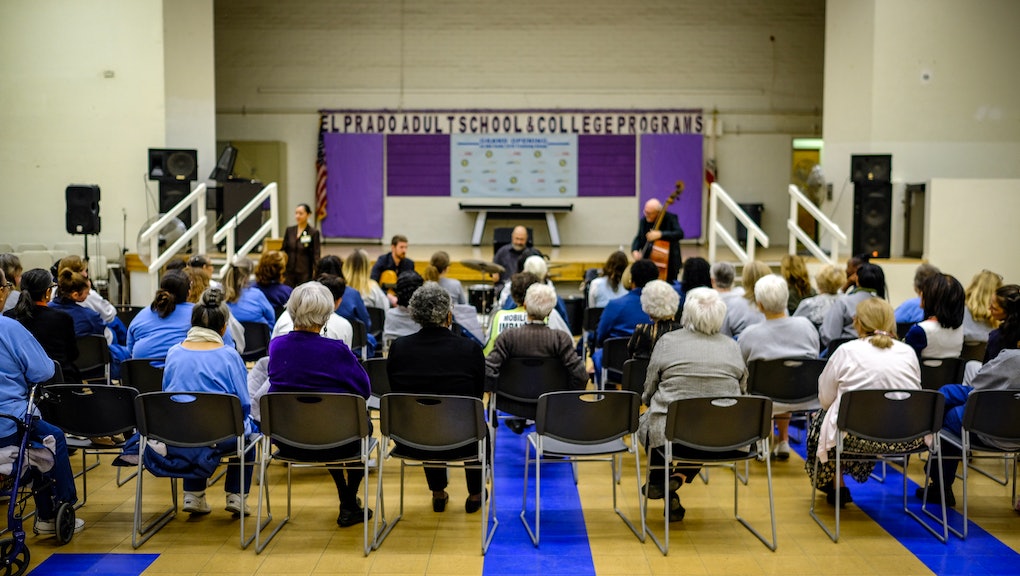 There are very few things that Tina Brown finds surprising in her day anymore.

As a person incarcerated at the California Institution for Women, a general population prison in Corona, California, Brown’s days and nights are fairly regimented. But once in a while Brown, along with the rest of the women housed at CIW, get to experience something special: the sounds of being free.

“Some people have never been exposed to jazz,” she told Mic as she sat in the prison’s gymnasium after an hourlong performance by a jazz quartet. “I felt like I was at the park. I don’t normally listen to it, but I love it.”

Though programming like this is still rare in prisons across the nation, the California Department of Corrections and Rehabilitation sees arts and cultural programing as a key tenet to that last word in their title: rehabilitation.

“Special programs or presentations, such as a music performance, help the inmates by giving them a sense of normalcy and value,” Ronnie Shupe, the community resources manager at CIW said. “The music itself is uplifting and empowering, which is great for those that may need their spirits lifted.”

Indeed, music and cultural programing has already proved to be a powerful tool in the state of California. There, the Department of Corrections and Rehabilitation has partnered with the state’s Arts Council to create the Arts-in-Corrections program. The program consists of several different learning opportunities, including theater, painting, sculpture, writing and music programs. The goal, the program’s site explained, is “to combat recidivism, enhance rehabilitative goals and improve the safety and environment of state prisons.”

Shupe noted that for many of the women, the performances can be an emotional experience. “They are always so grateful and appreciative that someone from the outside would take the time to come inside to share with them,” she said.

This recent performance was led by Brandon Bernstein, CEO of Music Lifeboat, an organization that provides free music education.

According to Bernstein, that transformative moment comes through the “power of showing up” for these marginalized groups whose voices so often go unheard. He even shared a heart-wrenching moment he experienced with a woman during one of his dozens of performances in California prisons. “There was a woman that stood up after we performed the first song and she was six months pregnant, and she said this is the first positive experience her baby has ever had.”

“It changed my life,” Bernstein said of his first performance, which was several years ago in a prison in Valencia, California. “Every musician that comes in and performs, including myself, it’s always transformative.”

“I felt like I was at the park. I don’t normally listen to it, but I love it.”

Beyond simply getting to listen to the music, events like the ones Bernstein puts on also allow the women and men on the inside to talk openly — both with each other and the performers — about overcoming mistakes. And as Brown said after the CIW performance, it’s the opportunity for interaction that she loves most. “He’s so encouraging,” she said of Bernstein’s open discussions.

“This is something as a society I don’t think we talk about often. But we don’t just perform. We have dialogue with inmates. I think that there’s a fear in general in our society [about] making mistakes or beating yourself up over mistakes. Mistakes are okay. And it’s what you can learn from them and how you grow and how you become better,” Bernstein said. “I think it’s very powerful.”

That power is proven in numbers as well. As one study from the Center on Juvenile and Criminal Justice found, participating people had 75% fewer disciplinary actions while incarcerated. Moreover, those who took part in the program were up to 27% less likely to reoffend after they were released from prison, which in turn saves both lives and taxpayer money.

Though this particular musical event at CIW was put on by volunteers outside of the AIC, it still has the same level of impact on the prison population, Kristina Khokhobashvili, a CDCR spokesperson, told Mic.

“It humanizes them,” she said. “You know a lot of inmates might feel forgotten or they might feel like they’re not deserving of those sorts of events, and it helps show them that if you’re doing the work and if you’re creating a peaceful environment, even if it’s inside a prison, that that’s being recognized.”

Khokhobashvili pointed to other innovative programing that is proving to help reduce violence in prisons and reduce recidivism rates including yoga programs across the system, coding classes at San Quentin and the only men’s cosmetology program in the nation at Valley State. And with all of these programs Khokhobashvili can already anticipate the criticism some might have with allowing prisoners to experience them for free.

“People can look at a yoga class or cosmetology training or a free symphony performance and say, ‘Well that’s not fair, they’re inmates. I don’t get free symphony tickets,’” she said. “There’s a couple of things: For for one, they’re still in prison. I’m sure they’d rather not be in prison and not be at the symphony.”

Khokhobashvili then noted that these programs aren’t necessarily just so people can enjoy their time in prison, but rather it’s to help them prepare to get out.

“Most of our inmates are going to get out of prison and return to their communities. So I, speaking as someone with neighbors, would much rather live next door to someone if they did serve prison time that had exposure to rehabilitative programs and the positive activities, and they’re not coming out of prison angry and violent,” she said. “And all of these positive things, from the deepest the introspective therapy groups to symphony performance, all combine to make that more of a possibility.”

Though Brown, now 55, told Mic she will likely never get out of prison, as she was sentenced to 25-years-to-life, said it is these programs and this system that she’d choose over any other. Brown, who has been at CIW since 2013 and entered the prison system in 1996, added, “If you have to be some place it’s good to be here.”