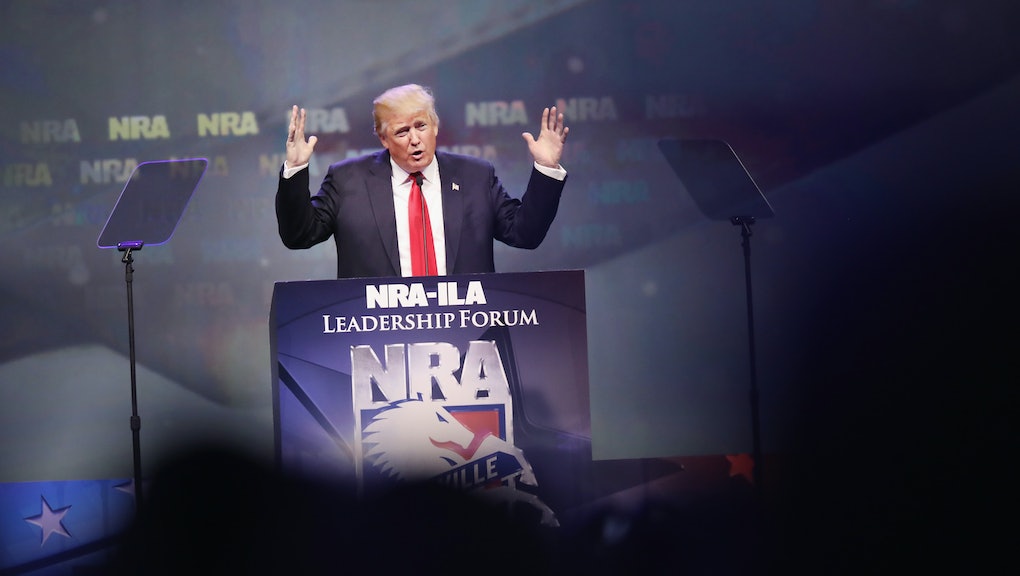 The Trump campaign was contacted by a conservative operative to set up a back-channel meeting between Trump and Russian President Vladimir Putin, the New York Times reported Sunday. The alleged connection represents another effort from the Russians to ingratiate themselves with President Donald Trump during the 2016 election.

According to an email obtained by the Times, which was turned over as part of the congressional investigations into potential collusion between Russia and the Trump campaign, operative Paul Erickson wrote an email to Trump campaign adviser Rick Dearborn in May 2016 titled “Kremlin Connection” that asked for Dearborn and then-adviser Jeff Sessions’ advice on how to connect Trump with the Russian leader.

Erickson, the Times reported, is a conservative activist and member of the National Rifle Association. The operative’s NRA connection reportedly allowed Erickson to establish ties to Russia. The report said he worked with Maria Butina, founder of the Russian gun-rights group Right to Bear Arms, and traveled to Russia in 2015 as part of an NRA delegation.

The NRA’s annual convention in Louisville, Kentucky, is where the Russians would attempt to make “first contact” with Trump, Erickson wrote to Dearborn, as the Russians were “quietly but actively seeking a dialogue with the U.S.”

In the email quoted by the Times, Erickson elaborated on the Russians’ desire to align themselves with Trump.

“Putin is deadly serious about building a good relationship with Mr. Trump,” Erickson wrote, according to the Times. “He wants to extend an invitation to Mr. Trump to visit him in the Kremlin before the election. Let’s talk through what has transpired and Senator Sessions’ advice on how to proceed.”

The email also mentioned the Russians’ distaste for Trump’s opponent Hillary Clinton, as Erickson commented that the Kremlin “believes that the only possibility of a true reset in this relationship would be with a new Republican White House.”

“Ever since Hillary compared Putin to Hitler, all senior Russian leaders consider her beyond redemption,” Erickson added, according to the Times.

The Russians were reportedly attempting to put Trump in contact with Russian official Alexander Torshin, who the Times noted was “instructed to make contact with the campaign.” Torshin is a deputy governor of the Russian central bank and member of Putin’s United Russia party, the Times noted, and Butina previously served as his assistant. Torshin also served in the Russian Parliament, during which time Spanish investigators say Torshin laundered money for the Russian mafia through Spanish banks.

According to Erickson’s email, Torshin was aiming to make contact with Trump during a reception honoring wounded veterans during the NRA convention. Trump and his campaign officials did not attend the reception, the Times noted, although Torshin and Donald Trump, Jr., both attended a separate dinner event the same night.

Erickson’s email was not the only attempt made by the Russians to be put in contact with Trump at the NRA convention. The Times reported on Nov. 17 that an email was also sent to Dearborn by Christian conservative advocate Rick Clay seeking a meeting with Torshin during the reception Clay hosted at the NRA convention. The two emails were reportedly sent “within days of each other,” according to Sunday’s Times report.

According to the Times, it is unclear what transpired from Erickson’s email and how it was handled within the Trump campaign. Clay’s email, however, was reportedly forwarded by Dearborn to senior Trump officials and ultimately rebuffed by Jared Kushner, the Times noted.

The report of Erickson’s email marks the latest revelation of the Russians attempting to coordinate with the Trump campaign, following reports of Trump Jr.’s meeting with a Russian lawyer and a meeting between former adviser George Papadopoulos and a professor with Russian ties claiming to have “dirt” on Clinton. The Times report also comes two days after it was revealed that former national security adviser Michael Flynn pled guilty to lying to the FBI about his communications with then-Russian ambassador Sergey Kislyak in December 2016.