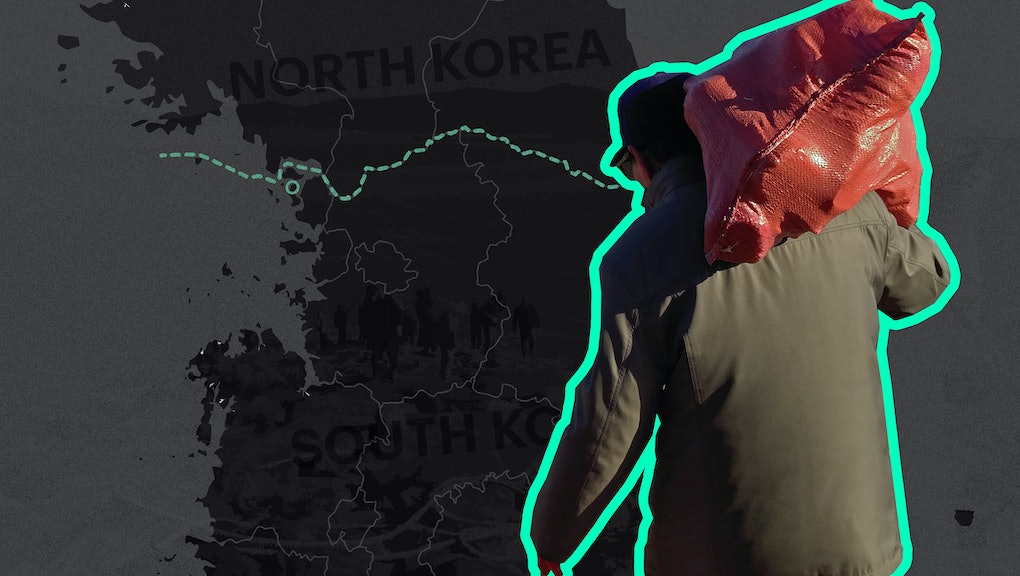 I spent a day with North Korean defectors, who lived through hell and want a revolution

Less than eight miles from North Korean shores, Jung Gwang-il climbed out of his car and hauled red tarp sacks full of bottled rice and USB drives over his shoulder, toward the icy currents of the Yellow Sea.

There, the 54-year-old North Korean defector waited in subzero temperatures until the tides were just right. Then he and a group of at least seven others — also defectors — formed a circle on the jagged boulders along the water’s edge. Shouting into the turbulent winds, they shared a few words of hope for those still north of the Korean Demilitarized Zone. Meanwhile, plain-clothes officers stood by.

“South Koreans think North Korea is all a political issue and that it has nothing to do with them,” Jung told me that day, through an interpreter. “A lot of the time, we have to gather rice from our own homes and send it North.”

One by one, the group hurled the bottles into the sea. The pile slowly dwindled, and an estimated 880 to 1,100 pounds of rice and tampons started to float toward toward the Democratic People’s Republic of Korea. South Korean dramas, world news and American films stored also made their way on USB drives.

“The reason I’m doing all of this is because I believe it’s important. It’s the only way things are going to get better in North Korea,” Jung said. “If they saw this media 10 years ago, we wouldn’t have had three generations of the same family running the country. … They wouldn’t put up with it.”

For him, the theory is straightforward: Provide enough North Koreans with a view of the outside world, and maybe we’ll someday witness a revolt like the Arab Spring.

The hope for revolution

About twice a month, Jung gets up before dawn and drives about two hours to Seongmodo Island to send the goods north. It was a Saturday at 6:45 a.m. when I met him at his Seoul apartment, just south of the Han River.

Inside, his house revealed a life colored by more than his hardships: stickers of popular cartoon characters were plastered on his furniture, and a glass case displayed wine glasses, kitschy Roma souvenirs and photos of his grandchildren. The living room floor was littered with black electrical cords, loose USB drives and three laptops. Two of them simultaneously played clips that he sent north: Trump’s Nov. 7 speech from Seoul, plus news detailing the assassination of Kim Jong Nam — North Korean leader Kim Jong Un’s half-brother, who was killed with a nerve agent in a Malaysian airport on Feb. 13.

North Koreans “need to know that all of this is happening, but they unfortunately don’t,” Jung said. The USB drives also had clips of everyday life in other countries, he said — insignificant things, like people walking in the park or eating at restaurants.

“North Koreans have to see other countries that open their door and let outsiders in, and see that they’re doing well.”

Most people in the DPRK don’t have access to computers, and just a fraction of the elite have ever accessed the internet. But Jung, who has now been in South Korea for 13 years, is a bonafide technophile. When he’s bored, he “likes to experiment” with film and music that he eventually sends to the DPRK (his mashup of Rihanna’s “Bitch Better Have my Money” and Missy Elliot’s “Milkshake” is, simply put, unforgettable work).

“I learned how to edit all of these videos myself. I write scripts for some of the films and I find clips that would be the most convincing to North Koreans,” he said. “I know what they’d like to see and what they’d like to hear. Nobody else would be able to do it right.”

Jung works in the furniture business to make a living, but his spare time is spent on “information dissemination.” It’s a common term used by the handful of activist defectors who try to take North Korea’s future in their own hands.

At Jung’s house, another defector named Lee Soon-sil — a well-known restaurateur who regularly appears on South Korean talk shows — sat next to me on the couch. Life for defectors who choose to be in the public eye isn’t always easy — she warned Jung about the strange text messages he had been receiving from someone claiming to have met him over a decade ago in New York City. It’s implied that the person could be a spy or a hacker, but other than that, the conversations between them were mostly lighthearted.

No one would know that they’ve been through hell. At least not at first glance.

In North Korea, Jung lived as a trader who was occasionally allowed to visit China — there, he watched South Korean dramas for the first time. During North Korea’s “arduous march” famine, in the 1990s, Jung said he regularly saw officers stacking bodies of starved children on his morning walk to work. Both circumstances fueled his skepticism of the Kim regime’s propaganda, but a wrongful prison sentence was what pushed him to defect.

In 1999, a co-worker accused him of espionage. He was innocent, but that didn’t matter: In the middle of the night, officers showed up at Jung’s house to beat and arrest him without explanation. After 10 months of torment in a prison — his arms tied behind his back in a crouching “pigeon torture” position — he finally confessed to a crime he never committed. During those 10 months, he says he dropped from 165 pounds to roughly 79 or 80.

“I was not able to hold myself up on my own,” he recounted at the 2016 Oslo Freedom Forum.

Jung then spent more than two years at Yodok — one of North Koreas’s many known prison camps, which are often compared to Hitler’s concentration camps or Lenin’s gulags. He worked 16 hours a day for more than two years. In the winters, dead bodies of other prisoners would freeze into a “big, jellied block of flesh,” and he’d have to break them apart using a shovel before burying them.

He was released in April 2003, when authorities determined the charges against him were false. But Jung couldn’t take it anymore. Twelve days later, he risked his life to swim across the Tumen River into China — an escape plan that’s getting even harder to pull off these days. He crossed into Vietnam, then Cambodia, then Thailand and eventually settled in South Korea.

These days, he tries not to linger on it.

“People talk bad about the North Korean government — the Kims — saying that they’re kings,” Jung says. “But talking about that isn’t helping anything or anyone. Stop complaining about their system over there and start paying more attention to the good we and information dissemination can do.”

Jung bundles all of his activism under an official organization name: No Chain for North Korea. It’s a play on words — he sees the DPRK as a giant prison camp that binds its people in chains.

From the outside, their operation seems scrappy — their official website and 501(c) nonprofit status are still in the works — but Jung said that he’s in touch with about 500 members who “just meet house to house, or wherever is convenient.”

“The North Korean defectors in South Korea — a lot of them help each other and support each other,” he said. “Nobody pushes anybody. We stick together.”

No Chain sends USB drives full of foreign media and other aid to North Korea by sea, drones, balloon launches and a network of smugglers along the Chinese border. When they can, they use Spot Gen3 GPS tracking devices to see where the goods end up. Because they’re expensive, they now often rely on anecdotal reports from South Korean fishermen or people inside the DPRK instead.

The group has also rescued 45 North Koreans from China to date, according to Henry Song, an activist based in Washington, D.C., and the North America director for No Chain. The gamble of life and death doesn’t end after a North Korean person defects: The danger of human trafficking and repatriation still looms over them as they move from China to Southeast Asia. In July, a family of five North Koreans facing deportation died by suicide — suggesting that was a better option than being returned to the DPRK by Chinese forces.

“It breaks my heart to see the North Korean refugees abused and mistreated in China,” Song said. “North Korea as a nation and regime is an anomaly — a [blasphemy] and paradox that should not exist but does. And so we as activists must do whatever we can to end this madness.”

The struggle to help North Koreans

For nearly 70 years, the Korean peninsula has been divided in what is still technically a war (in reality, it looks more like a ceasefire). It’s a tragedy more powerful than the starkly contrasting photos of Seoul’s skyline — a futuristic metropolis — against the metaphorical tumbleweeds of North Korea’s dimly lit Pyongyang. Families are divided, lives are strictly controlled and people are needlessly persecuted.

“In the future, if North and South Korea are reunited, I think it’s important how,” Jung said as he drove his car back to Seoul from Seongmodo Island. “I believe the right way to reunite is through the North Korean people. They have to change their thinking, open their eyes and rise against their own government. That’s the only way we can have good, long-lasting unification.”

To date, about 30,000 North Koreans have fled to South Korea, and the heavily armed Demilitarized Zone forces most to escape through the Yalu or Tumen River into China. But things have started changing in recent years: The border between North Korea and China is tightening, for one, sealing more potential defectors into the DPRK.

“It’s much, much harder [to escape]. It’s much more expensive, much more dangerous and much more difficult,” Suzanne Scholte, chair of the North Korea Freedom Coalition, said by phone. “Kim Jong Un has a fear of his own people. There’s been a severe crackdown ever since he has been dictator, partly because defectors are working so hard to rescue others and to take information in and out of North Korea.”

For activists like Jung, other issues are mounting. The DPRK government has gotten more sophisticated about how it surveils citizens, and recent developments in state-sanctioned software have made it harder for North Koreans to watch foreign content held on the USB drives. Donations are also waning — as is general interest in North Korean human rights, Song fears.

“South Koreans think that North Korean human rights and helping defectors is, for some reason, a conservative issue. [They] also see defectors as outsiders and with great suspicion, instead of people that should be embraced and helped,” Song said. “Most donations for defector NGOs and activities come from private individuals and churches.”

In Jung’s car, he made it clear that he’s “not asking for any kind of reward or payback.” Around 3 p.m., he makes it back to Seoul — in total, the entire send-over took about eight hours.

Jung then apologetically rushed to wrap up. He has to start a shift at the furniture company soon, he said.