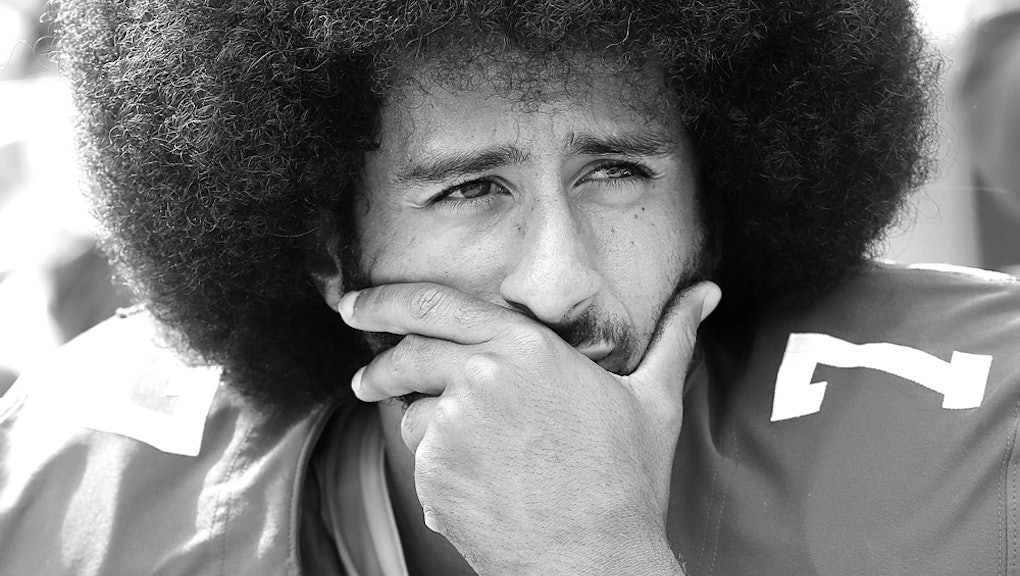 NFL Media reporter Steve Wyche couldn’t have known how it would all play out on Aug. 26, 2016, when he noticed San Francisco 49ers quarterback Colin Kaepernick sitting on the bench during the national anthem.

“He has done this in at least one other preseason game,” Wyche noted in his now pivotal article on the origins of the #TakeAKnee movement.

Kaepernick didn’t appear to be looking for added attention but took a personal stance by not standing for the anthem less than two months after police shooting deaths of Alton Sterling and Philando Castile. Those killings were preceded by the likes of Walter Scott, Akai Gurley, Tamir Rice, Eric Garner and thousands more.

“I am not going to stand up to show pride in a flag for a country that oppresses black people and people of color,” Kaepernick said when asked after the game about sitting for the anthem. “To me, this is bigger than football, and it would be selfish on my part to look the other way. There are bodies in the street and people getting paid leave and getting away with murder.”

When news of Kaepernick’s move went viral, he was criticized for being unpatriotic even though he’d explicitly stated his beliefs in the ideals of America and what the flag symbolizes for him. Ironically, it was former NFL player and former U.S. Army Green Beret Nate Boyer who counseled Kaepernick about taking a knee instead of sitting during the anthem as a sign of intended respect for U.S. veterans.

“Soldiers take a knee in front of a fallen brother’s grave, you know, to show respect,” Boyer said. From that point on, Kaepernick opted to take a knee to make his anti-police brutality message clearer, but it still fell on deaf ears for those who probably never intended to listen in the first place.

Kaepernick unwittingly became a political lightning rod, both hated and celebrated among a staunchly divided American electorate; NFL boycotts have been levied for and against him; President Donald Trump repeatedly has used him as a rallying cry for his anti-Kaepernick supporters. He’s been called selfish, unappreciative and a hypocrite by his biggest critics.

But Kaepernick has pressed on as an advocate for justice and equality. He’s given a total of $1 million of his own money to multiple charities, including the 100 Suits for 100 Men initiative. He’s worked with inner-city youths through initiatives like his Know Your Rights camp, which teaches kids how to handle interactions with law enforcement.

“A lot of people take the spotlight — Kap actually took the initiative to take a stand,” Kevin Livingston, the founder of 100 Suits, told Mic. “I’ve seen Colin’s effect. I’ve worked with him for almost two years now. Some people jump out when it’s cute, but his actions have exonerated some young men, have uplifted some young men.”

Kaepernick has joined a storied tradition of black athletes taking controversial stances against racism throughout U.S. history. He’s been compared to Muhammad Ali, Mahmoud Abdul-Rauf and other socially conscious pro athletes of America’s past who were once vilified for standing against racism, but today are celebrated.

In 2005, San Jose State University unveiled statue dedicated to its alumni Tommie Smith and John Carlos who famously flashed Black Power salutes after receiving their medals at the 1968 Summer Olympics in Mexico City. Both Smith and Carlos have been vocal supporters of Kaepernick. “Don’t hate the kid because he stood up for something to change,” Smith said in 2016.

Clayborn Benson, director of the Wisconsin Black Historical Society, said athletes like Kaepernick deserve to remembered for forcing Americans to examine the country’s ongoing legacy of racial oppression when many would prefer to look away. That’s why Kaepernick should be honored with a statue in Wisconsin, where he was born Nov. 3, 1987; he and his adoptive parents moved to Turlock, California, when Kaepernick was 4.

“Many think sports should be exclusive and not deal with our everyday lifestyle,” Benson said in a phone interview. “That’s wrong. Guys like Kaepernick, Ali and Kareem Abdul-Jabbar, they see sports as being part of our political lifeline and both are one in the same. The political struggle of our lives have always related to sports.”