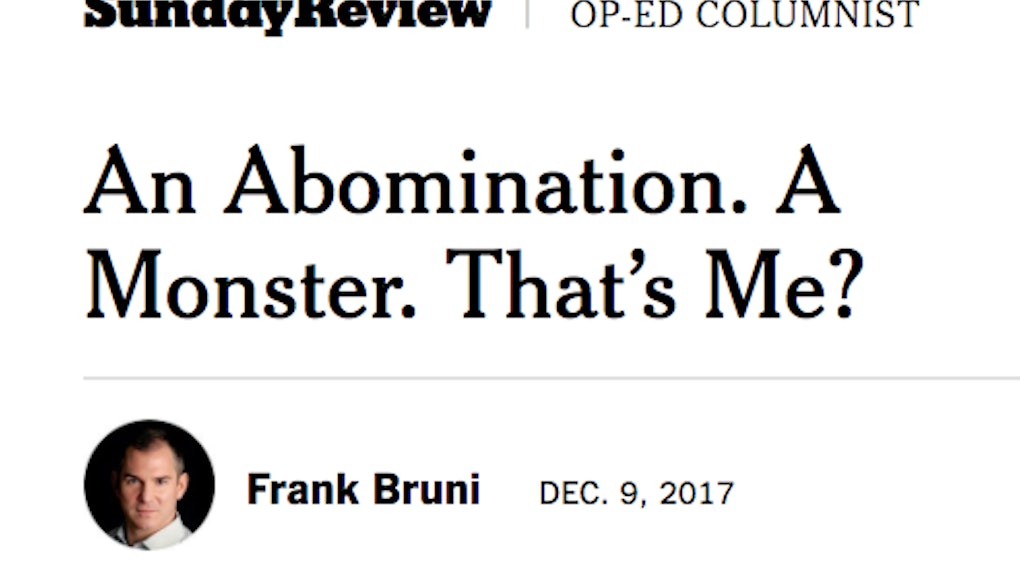 On Sunday, the New York Times published an op-ed by columnist Frank Bruni decrying what he sees as a true impediment to the progress of racial justice: anti-white hatred.

“It used to be that when someone called me an abomination, I was in the presence of a homophobe,” Bruni, the paper’s first openly gay columnist, wrote.

The inspiration for Bruni’s lament is an op-ed in a student newspaper at Texas State University, which says that white people “shouldn’t exist.”

“I hate you because you shouldn’t exist,” an opinion columnist for the student paper wrote of white people. “You are both the dominant apparatus on the planet and the void in which all other cultures, upon meeting you, die.”

But Bruni’s target isn’t just acerbic campus radicals: the Times columnist estimates that the student writer’s sentiment pervades the entire progressive left, and all “those who correctly call out racial inequities and social injustices but wrongly fall prey themselves to the bigotry behind those ills.”

Bruni spends much of the article decrying President Donald Trump’s role in all of this, suggesting that the alleged wave of anti-whiteness borrows from Trump’s tactics of “driving wedges between us.” Though Bruni’s criticism isn’t that white people are systemically oppressed, he does argue that minorities fighting for justice are falling pray to “bigotry” when a select few of them say mean things about white people.

If it seems odd that an esteemed writer at the paper of record would choose to amplify a college student’s essay, it’s the latest installment in a long tradition. The specter of political correctness, progressive intolerance and illiberal universities originally popped up in the early 1990s as a backlash to affirmative action. By portraying the increased status of African-Americans as a crusade to unseat white people from power, conservatives were able to “rebrand racism in ways that were politically acceptable in the post-civil-rights era,” the Guardian points out.

The spectacle of white grievance has not only lived on since the ‘90s— it has flourished.

A recent NPR poll found that 55% of American white people believe there is anti-white discrimination in the U.S.. Only a minority reported actually experiencing any such discrimination, suggesting a disconnect between the reality of American life and, say, what Americans read in the news about the alleged crisis of anti-white sentiment.

The white supremacist right is taking full advantage of the white persecution panic. Posters proclaiming that “It’s ok to be white,” popped up at U.S. colleges as the fall semester began, daring progressives to fall into the trap of disagreeing. A more benign version of this campaign slogan for white grievance is the infamous “All Lives Matter” (or “White Lives Matter,” except that title was already claimed by a series of actual neo-Nazi rallies).

As Bruni put it himself: “Mirroring the ugliness of white nationalists and the alt-right just gives them the ammunition that they want and need.”